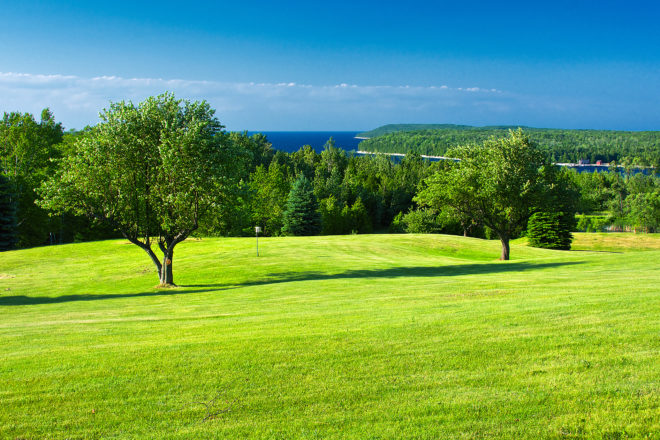 The vista from the Grand View Overlook entering Liberty Grove is one of the most majestic welcome mats on the peninsula. Photo by Len Villano.

According to the National League of Cities, there are 31 municipalities with the word “liberty” in their names. Among them is the Town of Liberty Grove, which was so named by Zacharias T. Morbeck when it became Door County’s sixth organized town in 1859.

Morbeck was instrumental in forming the town after he was defeated in an election to become Gibraltar’s town clerk. He found some like-minded folk to organize Liberty Grove, and the first town meeting was held at the home of Ingebret Torgensen on April 5, 1859.

At that first meeting, attendees had much business on their plate: coming up with a town clerk, treasurer, superintendent of schools, constable, leader of weights and measures, overseer of highways, four justices of the peace, three supervisors — one of whom was to be designated town chair — and what amount of money had to be raised from residents for surveying and building roads, and for defraying all charges and expenses arising in the town.

There is no known record of the thought process that led Morbeck to suggest the name Liberty Grove, nor is there a record of citizen discussion leading to its adoption as the new town’s name. However, it seems possible that it had something to do with Morbeck’s run-in with voters in Gibraltar: Give me the town clerkship, or give me Liberty Grove!

At 36,331 acres, Liberty Grove is Door County’s largest township, with 45 miles of shoreline.

Mystery seems to have long enveloped the town. In 1880 — a mere 31 years after its formation — Charles Martin, editor of the Weekly Expositor Independent, undertook a project to provide for his readers “A Brief History of Door County, Wisconsin.”

“However, it was with much difficulty that we obtained any information in Liberty Grove township for a county history,” Martin wrote. “In the first place, the number who have lived in the town ten or more years is but few. And again, the inhabitants are most all foreign born, and talk but little English — and that little is very broken. Besides, they have been more or less imposed upon by ‘sharpers,’ and are now very skeptical.”

The “sharpers,” according to Hjalmar Holand’s section on Liberty Grove in his 1917 History of Door County, Wisconsin, were a pair of “smooth-tongued” horse traders who sold nags to dirt-poor farmers who could not meet the terms of the sales and lost their farms in the bad deals.

In his history of the town, Martin goes on to tell of meeting with the head of one family who spoke little English and suspected Martin of collecting names for an Army draft.

“Evidently he took no newspapers printed in his mother language, for he did not comprehend that the war was yet over which closed in this country fifteen years ago! With anger, he finally answered us: ‘D—n! I go no to war! I too old!’”

Martin said after “experiencing various incidents of the above nature,” he hired two native residents to gather facts.

“The men we hired neglected to send us their reports (if they collected any),” Martin wrote. What a missed opportunity to gather historical information from the founders and their families.

Martin did give a brief history of the town’s founding by disgruntled former Gibraltar resident Morbeck, whom he misidentifies as “C.T. Morbeck.” Initials were often used to identify folks back then, but it definitely was Z.T. Morbeck.

We do know that Morbeck served as Liberty Grove’s clerk, treasurer, assessor and justice of the peace, and in 1866, he was elected chair of the Door County Board of Supervisors before moving to Minnesota for good. Perhaps he moved to Liberty Township in that state’s Beltrami County or to the like-named place in its Polk County.