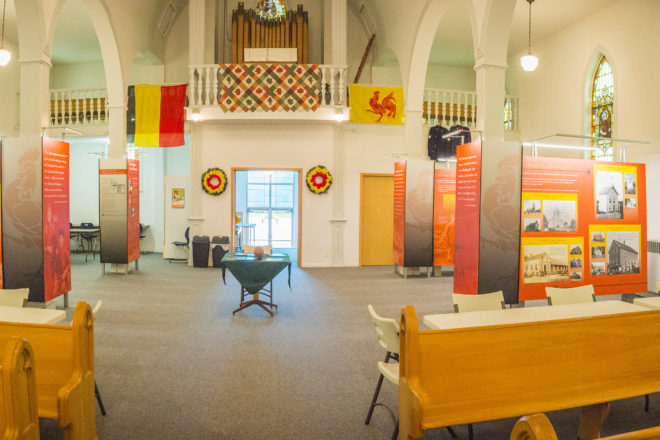 Inside the Belgian Heritage Center building in Namur. Photo by Len Villano.

When Belgains began settling in Southern Door in the latter half of the 19th century, they brought with them language, culture and names of places from their homeland.

The community today known as Namur – home of the Belgian Heritage Center – is just such a place.

Back when old Highway 57 (now known as County DK) took families on their way to northern Door County through Namur, the name caused many giggles when kids transposed the letters to the like-sounding “manure.”

The community was first known as Delwich. Why? History is cloudy on that, but the name “Delwiche” is common in the French-speaking Wallonia region of Belgium, and Hjalmar Holand tells us in his 1933 book Wisconsin’s Belgian Community that before a church was built in the area, Father F.E. Daems – a Belgian Catholic priest who served a large flock in southern Door, Kewaunee and Brown counties – held meetings in the home of Guillaume Delwiche.

“The house of Delwiche was thus for years the sanctuary of the Belgians of Union, Brussels and Gardner, so that when later a log church was built [in 1860, Our Lady of the Snows Catholic Church] a mile east of the Delwiche house, the congregation continued to be called the congregation of Delwiche, and is even to-day quite generally known by that name,” Holand wrote.

But if that’s the case, why drop the “e” from the name? Probably it’s just another instance of poor spelling by the person relaying the information to the county clerk, just as the Town of Sebastopol became Sevastopol.

In 1873, when a post office was established in the community – and through 1905, when rural free mail delivery arrived, negating the need for a post office – the unincorporated community within the Town of Union abandoned the Delwich(e) name in favor of Namur.

In Belgium, Namur is both a province in Wallonia and the name of the capital city of the province.

Again, there is no historical record detailing why the name of the Belgian province and city was used, but it does not seem to be a stretch to suggest that the settlers in the area were probably from the Namur region and so decided to make it the name of their new home.

But that lasted only until 1905, when Fairland School was built, and the community was known for almost the next 60 years as the innocuous-sounding Fairland.

In the spring of 1962, the name officially became Namur, complete with road signs and designation on the official state highway map, something never bestowed upon Fairland.

According to a newspaper of the time, the return to Namur was the work of the National Belgian Village Foundation, which planned an “authentic Belgian community” at Namur, which was to include a home for seniors, a museum, a working farm, an old-style Belgian restaurant and more.

The charge for this effort was led by two graduates of the Our Lady of the Snows School (now the home of the Peninsula Belgian-American Club): Ralph Baudhuin of Rockford, Illinois, and his brother, George “Butch” Baudhuin of Sturgeon Bay, founder of Marine Travelift.

The newspaper account stated that “support is anticipated from the whole Belgian community of the United States. The country of Belgium is also cooperating through its consulate.”

But it was not meant to be.

“George died of cancer, and it was completely dropped,” said Belgian Heritage Center board member Theresa Alexander. “They asked for people around here to help, but Belgians are very frugal. There are a lot of regrets that it didn’t happen.”

However, the historical significance of the region was recognized in 1990 when the Namur Historic District – roughly bounded by County K, Brussels Road, Highway 57, Belgian Drive and Green Bay Road – was declared a National Historic Landmark.

Twenty years later, the preservation of the area’s history was assured with the establishment of the Belgian Heritage Center in the former Our Lady of the Snows Catholic Church.