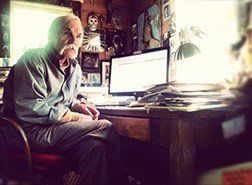 If an editor had worked up the guts to suggest that writer Norb Blei start a blog in say, 2002, Blei probably would have blasted her with an avalanche of disgust for suggesting he acquiesce to the whims of the day, to fit his prose into some new definition of what the reader would buy.

Blei’s relationship with that editor might end right there.

Blei, who profiled the characters of the peninsula in several books, most notably Door Way, acquired a love for the web the only way he could, in a stroke of serendipity, improbability and with a great story.

In August of 2007, Norb Blei sent out his Poetry Dispatch newsletter to his email list of devoted readers. This one, edition 179, included a review of a poetry chapbook by Los Angeles-based Mark Weber and Ronald Baatz. That email made its way to the inbox of a man living on the beach of Saint-Nazaire in Bretagne, France, who goes by the name Monsieur K. A fan of jazz and poetry, Monsieur K. had a website, Metropolis Free Jazz, where he sold hundreds of jazz, free jazz, improvisation and other obscure genres, including work by Weber.

Monsieur K. dropped Blei a note to let him know more about Weber, whose website he managed. Blei was fascinated both by Weber and by this strange new connection.

Blei wrote then that he “immediately loved everything [Monsieur K.] did on Weber, not to mention the beauty, design, quality of the website itself. Somebody doing something thing like this, somewhere outside one’s own country, immediately removes chapbook-poet Weber writing from Albuquerque, New Mexico and puts him and his work in a whole other dimension.”

Blei and Monsieur K. exchanged emails, leading the then 72-year-old Blei to take his words to a new realm.

“After catching up with Norbert Blei I came up with the idea to transform his Poetry Dispatch email list into a web page,” Monsieur K. explains. “That’s how Poetry Dispatch was born. Norbert sent me all the dispatches and Notes from the Underground in his archives so I could add them to the web page, and we began adding new posts as he produced them.”

Monsieur K. took the text from Blei’s “old fashioned” emails and posted it to the website, adding images, additional information, links and a visual touch. He had the relationship with Blei that a long line of editors only wished they had.

“Norb always gave me carte blanche,” he says. “It was really easy working with him. We were in contact on a daily basis and I still have thousands of his emails stocked on my computer.”

Now the words of an aging writer, one disenchanted with the deteriorating state of the publishing industry, made their way out of the old chicken coop he converted into his writing lair, tucked into the lonely woods at the tip of Wisconsin’s Door Peninsula, to readers worldwide. The blog has since been visited 649,000 times and still gets 250 more visitors every day, about half from the United States, but the rest from England, Canada, Italy and dozens of other countries.

Blei was enthralled by this worldwide audience. He learned the language of the web – links, trackbacks, CSS.

“He was very keen on following up new web techniques,” Klaus said. “Sitting in a converted chicken coop didn’t make him unaware of new forms of communication.”

The lone day I got to spend with Norb in his coop, he was energized when he talked about the blog. Where a typewriter once sat on his desk, a flat-screen monitor now held his words. It took him a while to make that switch (he loved the sound of the old ones. “It seemed like you had more ownership of the manual typewriter,” he told me.) but the ease of editing sucked him in. His first computer was a Tandy with a green screen, found down the road in Sister Bay at Hammersmith’s Radio Shack.

Twenty-five years later he found the Internet. Being discovered anew by readers in far-flung countries in the age when the book was dying gave him hope for the writer, hope for himself. The blogs brought him new followers, new people with which to communicate, to talk writing and words. But to some who had come to correspond with him over decades, something was lost.

“He got lost in the Internet,” said his close friend Jean Feraca, the longtime host of Wisconsin Public Radio’s “Here on Earth.” “I hate to say this, but it became almost annoying to get so much. When he was sending me stuff in the mail it was so personal. Before the Internet came along he would send copies of articles. I missed that.”

“If he had got the projects together I would have published the books,” Pichaske said. “But as a writer, you need an audience, you need to perform. At the end he didn’t have that in print. He did blogs, and that made him happy.”

Still, Feraca realized that the blog, email and this new audience were doing for Norb what the publishing industry no longer could.

“He saw it as the antidote to his isolation. The Internet was the way he could really be a contender.”

Myles Dannhausen Jr. wrote a profile of Blei in the winter 2015 edition of Wisconsin People & Ideas magazine. Dannhausen is a freelance writer who lives in Chicago’s Humboldt Park neighborhood. He is a native of Door County.