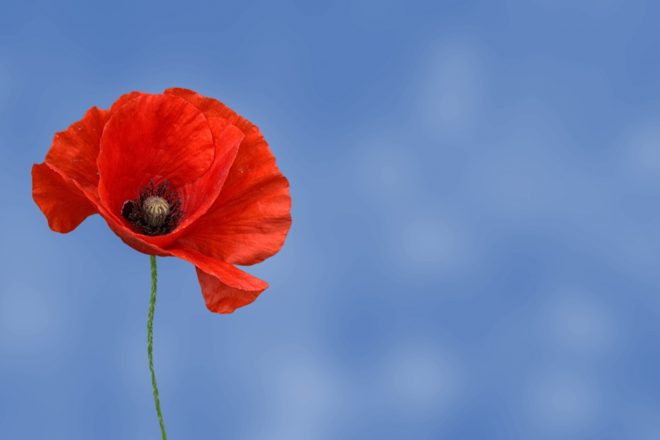 It began with an anonymous poem titled “In Flanders Fields” that appeared in the weekly British satirical magazine Punch on Dec. 8, 1915.

The poem’s author was actually a Canadian doctor, Lt. Col. John McCrae, who served as a brigade surgeon for an Allied artillery unit. He spotted a cluster of poppies shortly after the Second Battle of Ypres. (That battle, which took place between April 22 and May 25, 1915, was for control of the western Belgian town of Ypres. It marked the first time Germans used deadly chlorine gas against the Allies.)

Among the 87,000 dead, wounded and missing Allied soldiers was a friend of McCrae, Lt. Alexis Helmer.

In the wasteland between the warfare trenches, McCrae noticed the brilliant red flowers of the common (or corn) poppy growing, which prompted him to write “In Flanders Fields,” channeling the voices of fallen soldiers buried under the poppies.

The poem soon spread, eventually with McCrae’s name attached to it. In 1918, a woman named Moina Michael – a University of Georgia professor who had taken a leave of absence during the war to volunteer at the New York headquarters of the Young Women’s Christian Association (YWCA) to help train women for overseas duty – read McCrae’s poem in an American women’s magazine and vowed to wear a poppy every day.

After the war, she returned to Georgia and came up with the idea of making and selling red-silk poppies to raise money to support returning veterans.

Through her efforts, the Georgia branch of the American Legion veteran’s group adopted the poppy as its symbol, and the national organization followed suit in 1923 by voting to use the poppy as the official U.S. national emblem of remembrance.

Today veterans handcraft the poppies, which are distributed for donations (not sold) by the American Legion Auxiliary – the world’s largest women’s patriotic service organization – on Veterans Day and Memorial Day. One hundred percent of donations collected for the poppies directly support veterans, military members and their families.

In Flanders fields the poppies blow

Between the crosses, row on row,

That mark our place; and in the sky

Scarce heard amid the guns below.

We are the Dead. Short days ago

Loved and were loved, and now we lie,

Take up our quarrel with the foe:

To you from failing hands we throw

The torch; be yours to hold it high.

If ye break faith with us who die

We shall not sleep, though poppies grow