The white Badger Coaches bus gleamed in the moonlight as it stopped on a dirt road in Nicolet National Forest. Out walked 20 journalists, trying to silently cue up microphones, notebooks and pens.

If the wolves knew we were humans they wouldn’t howl back.

It was day four of the Institutes for Journalism and Natural Resources Mining Country Institute, and we had switched topics to wolf management. Wisconsin had its first wolf hunting season last fall, and Michigan may have its first this year. While they share a border and likely some wolf packs, the states take different approaches to wolf management. 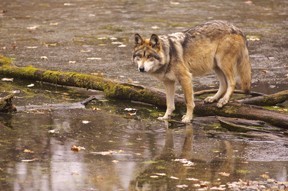 “In Wisconsin, the clear objective is population reduction,” said Dave MacFarland, wildlife biologist for the Wisconsin Department of Natural Resources. “We’re guided by several policies and documents, but the primary thing is our wolf management plan.”

The state’s current population is estimated at just over 800 wolves, and we went out to hear from some of them. Part of MacFarland’s job is to survey the wolf population, and the only way to do that is to get out in the field and howl. That night, he took us along.

“People like to think they’re really good at howling, but I need to remind myself that wolves will howl back at police cars and stuff, so it’s not rocket science,” MacFarland said as we approached the forest. “Basically just try and sound like a wolf. It’s a wolf howl. You don’t want to be too high pitched. You want to have a little baritone in there to avoid sounding like a coyote or something. It’s just sort of a… whooooooo.”

We were looking for a pack MacFarland estimated to have four animals and reproduce. Those wolves have stuck to their 40 square-mile territory for long enough that he was confident they were nearby, but not confident they’d respond. He doesn’t usually roll with a busload of 20 novice howlers, after all.

Speaking of novice howling, click here to listen to the reporters’ howl attempt>>

The first stop was unsuccessful, since nearby dogs returned MacFarland’s howls. We moved a mile and a half down the road and tried again. This time, we got a response. (The jury’s still out on whether it was a real wolf or a cell phone recording of MacFarland’s howl.)

Wisconsin’s 2013 wolf hunting season will open Oct. 15, and the harvest quotas were moved from 201 animals in 2012 to 275 this year. Only 117 were harvested last year, which MacFarland said didn’t change the population. This year he anticipates a 10 to 20 percent population reduction.