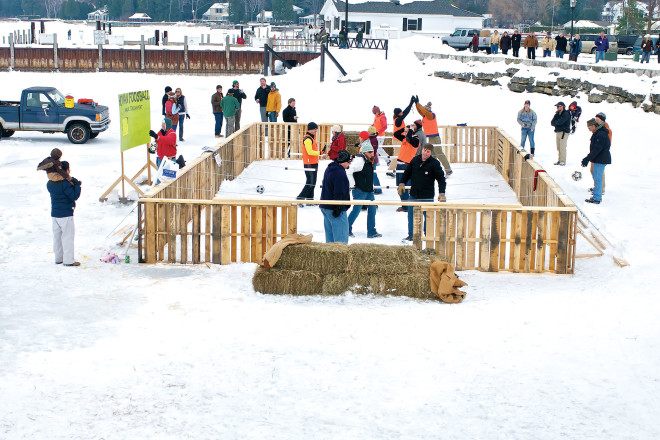 Most of us have memorable moments playing the fast-paced table game of foosball, whether in a bar, a college frat house, or a friend’s basement.

To fill in those who have lived a foosball-free life, the playing table looks like a miniature soccer field with walls. Players use small figures attached to rotating rods to “kick” the tiny ball into their opponent’s goal. 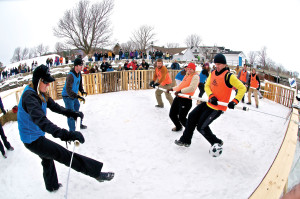 Now for a moment, imagine the table as a life-sized court outside on the ice; the tiny ball as an actual soccer ball; and the three-inch tall plastic figures attached to the rods as living, breathing, and questionably thinking human beings.

Now you can imagine the captivating sport of Human Foosball that made its Door County debut at Fish Creek’s Winter Festival last February.

“We couldn’t wait to get there and see what the court looked like and how the whole thing was going to work,” commented Andrew Holdmann, the Gibraltar/Sevastopol soccer coach, who had never heard of Human Foosball prior.

This makeshift court that sat on the frozen waters off of Clark Park was no inflatable, sissy contraption that is now apparently available from rental companies. It was constructed of wooden pallets and two-by-sixes for walls, steel cables drilled into the ice, PVC pipes for “rods,” and hay bales for goals. 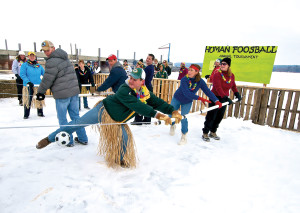 Approximately 50 pioneers braved the elements, prepared only with the expectations of the unexpected and the instructions of “dress warm and show up.”

With the first boot of the ball on Saturday morning, the Human Foosball Tournament began, evolved and took on a life of its own.

Players shuffled and jostled for position, constantly forgetting they were “attached” to their teammates on the same cable. The snow cover quickly turned into ice, and solid footing became as big of a battle as it was to score.

They fought for angles to the goal and best ways to defend. Goalies – whose hands were also “attached” to the horizontal moving rods – struggled to block the ball with every part of their body, except their hands.

The soccer ball, which in the cold weather turned rock hard (who knew?), ricocheted at lightning speed off of anything in its path – walls, shins, stomachs, groins, a pretty face. 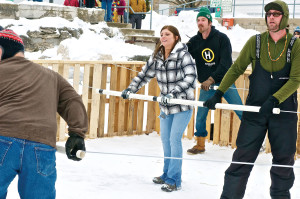 Amy Jacobs, whose On Deck team was decked out in hula skirts and leis in honor of her birthday that day, took two direct shots to the face but came out intact and with a resemblance of a smile. “Oh, it was nothing but fun,” laughed Jacobs. “The neat part about it is that all kinds of people of athletic ability, and non-athletic ability, can play.”

It did prove to be a great equalizer. As the winning team of Balls on Shins can attest, they were probably not the team with the most soccer savvy but did have the amazing fortitude to take a licking and keep on kicking.

Hundreds gathered, at first out of dumb-founded curiosity then later out of pure entertainment and for a first-ever spectator experience. 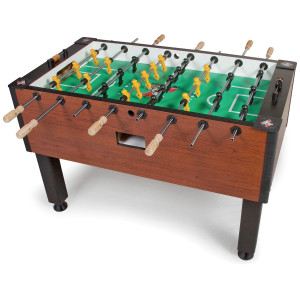 “It was a tremendous hit,” commented Karl Stubenvoll, one of the court constructors. “There was a great crowd cheering and watching, and the players were really into it.”

Human Foosball will return to this season’s Winter Festival, with the promise of expansions, tweaks, added participants, and perhaps an added court, softer balls and a lower bruise count.

And when Human Foosball becomes the world-dominant sport that it is obviously bound to be, those weekend warriors that forged a brave new world that Saturday in February can tell their grandchildren:  “When I played Human Foosball, we played without shin guards, in the winter, on the ice, without shoes, uphill, both ways…”

More pictures, video and information of the human foosball tournament, can be seen by visiting the Fish Creek Winter Festival Facebook Page or the Winter Festival page at www.visitfishcreek.com.