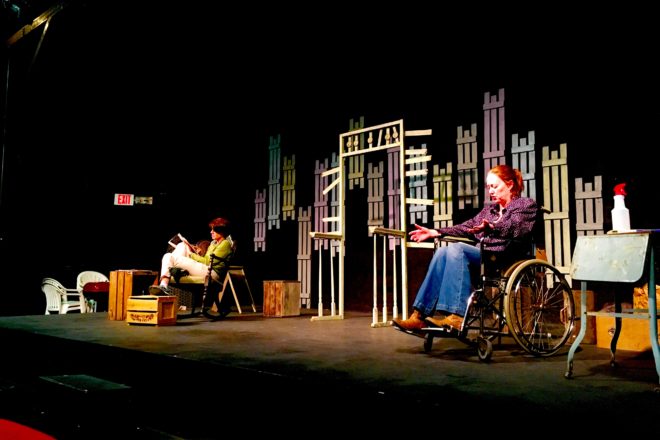 The first act, titled “Patio,” revolves around two sisters named Jewel and Pearl. Pearl is putting together a farewell party for her sister. She is a recent divorcée and is trying to make a life for herself on her own. Jewel is a beautician who cannot wait to leave town and move on with her life.

“Porch,” the second act, is set on the porch of an old Victorian owned by a cantankerous old lady named Dot. The other character is her daughter Lucille. Lucille, like Jewel, is eager to leave town. Her position varies from Jewel’s in one important way, however: she has no clear means of escape.

The play touches on subjects that are recognizable for a Door County audience: knowing all the people in the local newspaper’s obituaries or police reports, for instance. However, Valcq sees Door County as an unusual type of small-town community.

“Usually places that are as rural as this are not a magnet,” he said. “The way that at least two of the characters feel trapped in these small towns – I imagine that there are few who feel that way. Many of us who were not born here chose to live here.”

The openness of the plays is particularly intriguing. There is little backstory for the characters, and what should be taken away from the stories is open to interpretation.

“The plays don’t preach or even really teach a specific lesson like a lot of plays do,” Valcq said. “They certainly offer a lot to think about, but I think each person in the audience will have a completely different perception of what they’ve just seen.”

Valcq has found the format of the play to be an unexpected challenge. “It feels like directing and rehearsing two full plays rather than one play that’s two one-acts. The characters are completely different, and each act has a beginning, middle and end. You have to get into the right gear and get in the right headspace, and it is very different from a full-length production.”

What made the challenge feasible? Ensign and Troy, who Valcq praised highly.

“We are very fortunate that we get such wonderful actors to appear at our theater. I would certainly never choose a piece like this if it weren’t for the actors that we have. It has been a real joy.”

Performances will be held at 7:30 pm on Thursdays, Fridays and Saturdays and at 2 pm on Sundays. The May 21 performance will benefit the League of Women Voters of Door County. Tickets are $25 general admission and $10 students. For tickets, call 920.743.1760, visit ThirdAvenuePlayhouse.com, or stop by the box office at 234 N. Third Avenue in Sturgeon Bay.