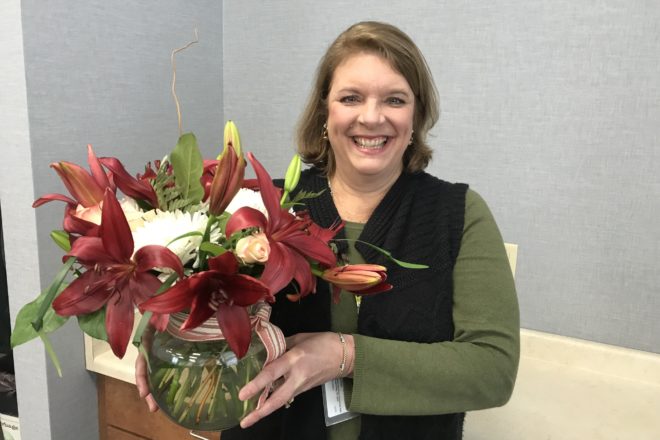 The Human Services board presented Cindy Zellner-Ehlers with flowers at the Feb. 13 board meeting. A plaque will be presented to her for 35 years of service as a social worker in the county Human Services Dept. at the Feb. 27 meeting of the Door County Board of Supervisors. Photo by Helen Bacon.

Members of Door County’s Human Services Board learned at their monthly meeting on Feb. 13 that Developmental Disabilities Program Manager Cindy Zellner-Ehlers once received a $1,000 check from a man who would become the future president of the United States.

The story of how her sister, a model, gave her Donald Trump’s private telephone number when she was soliciting funds for a program she started – a camp for siblings of children with disabilities – came out as Cindy Zellner-Ehlers told the board about the things she was finding while clearing out her office as she prepares to retire from a 35-year career as a social worker in Door County’s Human Services Dept.

She recalled to the board how she came to the job in 1982, from her first job as a social worker, managing a Sturgeon Bay group home for minimum wage, interviewing for a part-time social worker position with Door County along with a roomful of people, and then being offered the job that same night. The office clearing caused her to reflect on everything that came between.

“Don’t be afraid. Just be curious. Try and be creative,” she said. “I have a history of being able to try different things and trying to make a difference. My whole career has been based on that.”

Board member Helen Bacon said she was impressed with all the work Cindy has done building what may be the best developmental disabilities program in the state.

“I’ve always surrounded myself with amazingly gifted staff,” she said, adding that it takes a dedicated staff, as well as an engaged oversight board to make things happen for the clients.

“I think that’s the greatest gift we give the community, that gift of hope,” she said. “When you’re a parent of a child with special needs, that’s what they’re looking for.”

Board member Bob Rau recalled the first time he met Cindy in 1986, and remembered her as the involved, enthusiastic, can-do person she is today.

“Just the same enthusiasm you see today, which is just a marvel,” he said. “After meeting Cindy, I knew I had a friend.”

He also recalled how other people and counties marveled at Door County’s developmental disabilities program under her direction.

“They couldn’t believe the kind of communication that we did between the agencies and sharing of responsibilities and finances, and finding creative ways of moving money from one category to another so that it fit better,” he said. “Cindy was behind all of that.”

On top of that, Rau added, “She is a joy to have as a friend, co-worker, colleague, anything you want to name. And it isn’t just me. Everyone she meets. And she has a staff just as loyal as you can find. That’s really wonderful to see. That’s how you get to the point where trust is everywhere.”

Human Services Department Head Joe Krebsbach recalled the first departmental meeting he attended after being hired. Cindy impressed him so much that he went home and told his wife, “That’s the kind of leader I want to be.”

He also mentioned at least a dozen letters that have been received praising her skills and understanding. He cited one in particular from a La Crosse woman who met Cindy at a three-day developmental disabilities conference. She said they spent about 90 minutes talking and problem solving on a couple of the woman’s cases, and she wrote to say she got more out of that 90 minutes than she did the entire three-day conference, and wanted to let Cindy’s superiors know what they probably already knew – that they have a wonderful person on staff.

Referring to Cindy as both mentor and friend, Krebsbach said, “She’s the most amazing social worker I’ve ever worked with.”

“It’s just been an amazing journey,” Zellner-Ehlers said. “Thank you for the opportunities.”

She will also be recognized at the Feb. 27 meeting of the Door County Board of Supervisors, which convenes at 10 am.