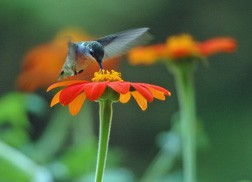 The Tithonia ranks high on the hummer’s list of favorites.

These are the days I’m quite happy to be able to sit quietly on the Leopold bench on our lower south-facing patio, virtually surrounded by flowers, and watch the hummingbirds. Throughout the summer, dating back to about the first week of May when the male hummers arrived here, these feisty little “spitfires” have tried their best to dominate the sugar-water feeders. However, this summer a few females have overpowered the males for a change and perched where they could be ready to “tell” the males where to go when the “red-throats” arrived at the feeders.

Judging by how quickly the sugar-water feeders were emptied in recent weeks, activity at their “watering-holes” has been very brisk, coupled with the fact that there are now more adults along with the young of the first brood competing for food. The same holds true with frequent visits to our front-yard flowers. Bear in mind that, yes, the hummers do get nectar from the blossoms but they are also constantly exploring for tiny insects, which the little birds especially like, that are lured to the deep-throated blossoms.

The adult males usually remain here until the last week of August or the first part of September before they head southward. They are the first to leave, followed in a few weeks by the adult females and finally, the last to take off for the South will be the young of this year. There is no close bonding between the adult males and females. They mate and that’s the end of a close relationship. He does nothing to help with nest building or feeding the young. One can’t help but assume that there also is no closeness between the female and her young, in that she takes off for the South a week or two earlier than her offspring. Undoubtedly they will never see one another again. 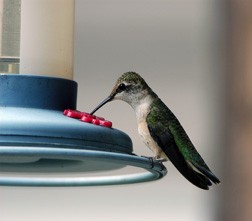 It’s been proven by banding the Ruby-throats in past years that, should the nesting conditions and food finding be of unusually good quality, and assuming these females survive the winter, there is a strong chance that these adult females will return to the very same location the next year to nest.

Realizing that the tiny female very likely migrated to southern Louisiana, for example, rested and fed for several days and then flew nonstop about 500 miles across the Gulf of Mexico. That she wintered in Central America and found her own way back the next spring to perhaps your woods and yard surely is just short of miraculous.

Years ago we became good friends with Drs. Fred and Marguerite Baumgartner, well known ornithologists and teachers from Oklahoma and later with the University of Wisconsin – Stevens Point. When they retired to Jay, Okla., where we visited and stayed with them, they banded many songbirds, including a few hundred Ruby-throated Hummingbirds each year. The bands for the hummers are not made of metal, which would be too heavy for the small birds, but rather of a special, strong, lightweight material. Each numbered band must be cut out with a pair of scissors and meticulously placed on one of the legs. No doubt, with today’s technology, there are new and improved ways of tracking a hummingbird, in addition to putting a band on one of their legs. 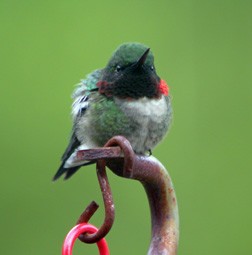 Here is one of the feisty adult males.

How fascinating it has been sitting so close to the flowers and bird activity. One of the hummingbird feeders was no more than four feet above my head at a point where I could watch every movement of the hummers. Occasionally one of the birds would fly downward and hover momentarily about two feet in front of my face, causing me to flinch a little. Another exciting move would be when one hummer suddenly arrived on the scene and proceeded to give chase to the one that was feeding. There were times they wouldn’t fly away from the feeder but instead sped around between my body and the upper porch support about three feet in front of me. I could practically feel the wind from their wings! Exhilarating! Electrifying!

There is no doubt in my mind that a colorful yard with many flowers does wonders in attracting, holding and feeding the hummers. This is the time of the year when a strange hummer male or two will suddenly appear in your yard to feed and rest for a day or two before continuing on its migration. The same daily changes in hummingbird population at your place will occur as the adult females begin moving southward, and also when it comes time for the young to do the same. 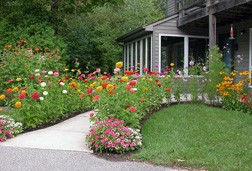 These colorful flowers attract hummingbirds, butterflies and other insects to the Lukes’ front yard.

We tend to use the same kinds of flowers from year to year, not because they are the best but simply because they have worked out so well for us in past years. The two perennials in our front yard plantings are the Swamp Milkweed, Asclepias incarnate, and Purple Coneflower. The rest of eight or nine kinds of plants are annuals. The tall zinnias are magical in luring and feeding not only the hummers but butterflies as well. Right now the only fairly abundant butterfly species is the Great-spangled Fritillary. What surprised me on a few occasions was seeing one of the hummers give chase to a fritillary!

Tall pink cosmos may not be visited very often by the hummers, but I happen to like them and I feel they serve as attractions, like miniature billboards, to the birds and butterflies. The brilliant Mexican Sunflower, Tithonia rotundifolia, is a top favorite of both hummers and butterflies. Their large orange blossoms surely liven up a yard. The tall verbena flowers are rich with nectar for the hummers, wild bees and butterflies. Flaming red salvia invites many insects to their deep tubular blossoms, which in turn appeal to the hummers. A little-known flower, native to Mexico, the Mexican Cigar Plant, Cuphea ignea, has tubular red flowers frequently visited by the hummingbirds in search of insects. Another Mexican plant, especially attractive to monarch Butterflies as well as the hummers, is the Mexican Milkweed, Asclepias curassavica.

Sparkly flowers, hummingbirds and butterflies combine to make for some exciting summer adventures, even while you are sitting perfectly still.