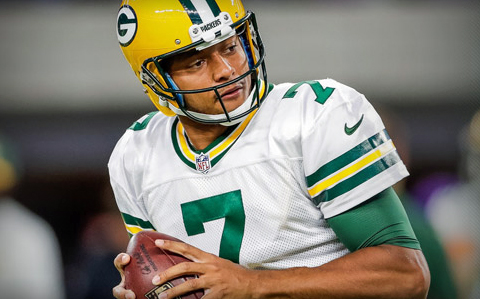 The Green Bay Packers head into their bye week on the heels of two straight losses, including a 26-17 defeat to the New Orleans Saints on a wet and rainy Sunday afternoon at Lambeau Field.

With quarterback Aaron Rodgers injured and Brett Hundley getting his first start, experts said Green Bay’s best chance for success relied on a strong rushing performance. The Packers delivered, averaging 7.5 yards per carry on their way to a total of 181 yards, including two touchdowns.

Rookie running back Aaron Jones turned in a stellar performance, rushing for 131 yards on 17 carries and one touchdown on a 46-yard run, Green Bay’s longest of the season. For those wondering what the Packers offense would look like with Brett Hundley at the helm, the early score helped to ease nerves.

Green Bay’s defense intercepted Saints’ quarterback Drew Brees twice in the red zone in the first quarter. However, Green Bay failed to convert two third-and-ones in the first half, allowing the Saints offense to find their rhythm.

After a Mark Ingram touchdown run early in the second quarter, Hundley answered with a 14-yard scamper of his own, exciting the crowd with his running ability. Green Bay held a 14-7 advantage going into the half.

The most obvious of the Packers’ struggles was the void Rodgers had left in the passing game. Hundley completed just 12 of 25 passes for a dismal 87 yards and one interception. Hundley was not able to get the ball into the hands of Green Bay’s playmakers, namely Jordy Nelson.

In fact, the top five receivers in the game were all Saints players. Leading the Packers in receiving were Martellus Bennett and Randall Cobb, each hauling in two passes for 17 and 15 yards, respectively.

The 24-year old Hundley, in his third season, has a career completion percentage of 47.8 with one touchdown pass to five interceptions for a quarterback rating of 32.3. Though he has performed well in the preseason, he has not yet been able to duplicate that success in the regular season and there are obvious growing pains as he takes over Green Bay’s offense.

His next opportunity will be in primetime when the Packers host the Detroit Lions Nov. 6 on Monday Night Football. With two weeks to prepare and revamp the offense, Packers fans should expect a different look from the team’s offense.