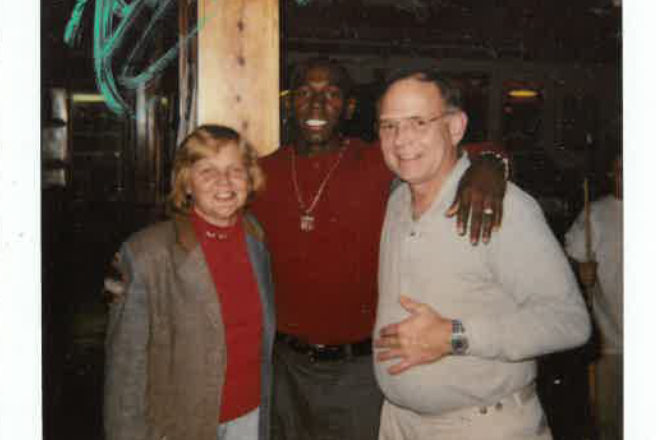 From left, Mary Dannhausen, Donald Driver and Myles Dannhausen Sr. at Husby’s in April of 2000. When Driver showed up at Husby’s to play pool with Northern Door youth athletes after the Lions Club banquet, the author’s parents could only find a dry-erase marker for him to autograph a Polaroid.

It marked the 39th year the club has brought a Packers representative to the banquet to speak to local kids. The event has created lasting memories for generations of young athletes, and though I never attended it as a kid, it also provided one of the most memorable moments of my days as a restaurateur.

Donald Driver was a little-known, little-used seventh round draft pick coming off a forgettable rookie year. He was the type of bottom-of-the-roster player that usually gets stuck with community outreach duties in the offseason, so the Packers sent him up to the banquet at the Sister Bay Bowl.

In April of 2000, I was in my first year running Husby’s Food & Spirits in Sister Bay, but I wasn’t in the house that night. It was food show season and one of the slowest stretches of the year in Sister Bay, so I headed down to a food show in Milwaukee. There, I heard speeches by legendary Packers quarterback Bart Starr and Vince Lombardi Jr., the son of the iconic coach.

After a day in the convention hall, I called in to check on the restaurant, expecting a depressing update about how little we made that day, to be followed by the usual anxiety about whether we could pay our bills that week.

What I got was an anxiety of a much different kind. Husby’s was packed. Apparently it was spring break in Chicago or Milwaukee, and we were one of the only restaurants open for the few families spending time in northern Door County.

We had only one bartender, one cook, and one waitress scheduled that Monday night. The waitress didn’t even bother to show up. But by 6 pm, the place was so overwhelmed that our lone bartender turned down the jukebox, screamed “screw it, serve yourselves!” before cranking the jukebox and walking out the door. (His language was a bit more colorful, and I must admit, it was a pretty cool way to quit.)

A couple of loyal customers stepped in to fill the gap, and my parents soon showed up to help out, but the crowd only grew with the chaos. When the Packers banquet ended the kids came across the street from the Bowl to play pool and shoot darts with their new best bud, who my mom said wanted to speak to me.

“Hi Myles, this is Donald Driver,” he boomed into the phone.

Driver had accompanied a bunch of the kids across the street to Husby’s, where he played pool, shot darts, and challenged kids in arcade games through the evening. He spent the next five minutes talking about the upcoming season, the new coach (Mike Sherman had recently been hired), bowling, and his night in Sister Bay. After I let him go he posed for photos with my parents and the kids.

In one day I had met Bart Starr, Vince Lombardi Jr., and talked football with Donald Driver on the phone. And thanks to Driver’s generosity, giving up an offseason night to hang with a bunch of kids in a tiny Door County town, what may have been the worst day in my eight years owning a restaurant is possibly my fondest memory.