“How do all those dollar bills get on the ceiling?”

It’s a question the bartenders at Husby’s Food and Spirits in Sister Bay come to hear in their sleep and may loathe on a busy Friday night. 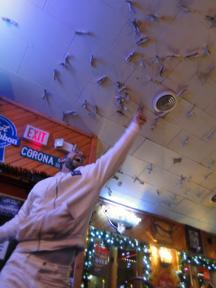 It took a few tries, but Geg Sparks of Madison finally got a dollar to stick to the ceiling.

The answer will cost the inquirer – only a dollar – but the fee goes to a good cause after its stint as part of the Husby’s décor.

In December, Husby’s bar manager James Larsen continued a tradition of giving through the bar gimmick by pulling $400 off the ceiling to donate to Toys for Kids to help buy toys and gifts for children.

“It’s nice to be able to take that money down and help out a great organization,” Larsen said. “We’ll keep doing it, pulling down a chunk a couple times a year.”

Last spring Larsen pulled $600 dollars down from the ceiling to donate to the Jim Larson Boys and Girls Club, an organization named after his grandfather. In previous years money taken off the ceiling has provided thousands of dollars for causes like the Door County Gulf Coast Relief Fund and local individuals in need.

The dollars on the ceiling tradition began 20 years ago when Husby’s was remodeled. The renovation moved the bar into an old storage area, exposing the high ceiling. It didn’t take long for people to figure out a new way to decorate the ceiling. 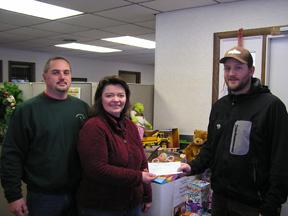 Holly and Geoff Hansen of the Sturgeon Bay Jaycees receive a check for $400 from James Larsen at the Thomas/Pfeifer Insurance office for donations to Toys for Tots.

Of course, the answer to how those dollars get on the ceiling is really quite simple. All you need is a bill (any denomination will do), a quarter, a tack, and a little bit of wrist snap.

You push the tack into the face of the bill, then put the quarter over the tack to give it some weight. Then you fold the bill over the quarter and pull the two ends of the bill together, grasping it with your fingertips. From there, it’s just a matter of getting enough wrist action in your throwing motion to whip it up to the ceiling.

There it hangs until Larsen pulls it down for a local charity.