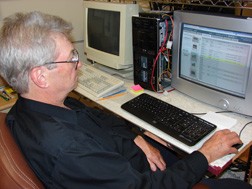 Our founding fathers would approve of Public Educational Government (PEG) television. Laddie Chapman, program director of the public-access station that operates from the Sevastopol Town Hall in Institute, says “We’re hyper local,” and that is what a democracy is all about – an informed public with a strong sense of community.

Public-access television is local programming that is broadcast through cable TV, funded through revenue obtained from franchise fees and other contributions, but not tax dollars. These specialty channels were created 40 years ago by the Federal Communication Commission (FCC) to be run by public grassroots groups, individuals, private non-profits, or government organizations to provide low cost or free communication services.

Chapman has been the driving force behind Town of Sevastopol TV. Using the video and broadcast technology skills he acquired during the 30 years he worked in Los Angeles, both as a professional musician and as a computer engineer in the technology industry, he has made his dream of public access television north of Sturgeon Bay a reality.

Because Chapman’s videos may also be viewed on YouTube, his audience extends far beyond Northeastern Wisconsin. The “American Tears” performance has registered more than 53,000 hits.

However, just as the course of true love never did run smooth, neither has the history of Sevastopol Television been without challenges. Initially Sturgeon Bay had been wired for cable TV. In 1992 the Glidden Drive Association requested service that they eventually received, providing them access to the Sturgeon Bay PEG cablecasts.

But in 2002 the cable company completed an upgrade that prevented Town of Sevastopol viewers from watching Sturgeon Bay TV. Chapman argued that the best option for continued viewing was “to start our own channel and program it with whatever we wanted: shows from Sturgeon Bay or original ones we produced ourselves. We could use the income from our franchise fees to support a small operation like this and it would be under our control.”

He petitioned the Sevastopol Town Board, they agreed, and by April 2003, Sevastopol TV was born. Originally the station was located at Sevastopol School as a cooperative venture, but then for more efficient management, co-located with the Sturgeon Bay stations in that Town Hall under the direction of Thomas Soik.

When the new Sevastopol Town Hall was built in 2009, a room was allocated that allowed the TV station to move back into the community where it now cablecasts on channel 986/97. Chapman, who had worked at the Sturgeon Bay Town Hall station, is now Program Director of Sevastopol TV. Sevastopol Town Supervisor Tom Gilman chairs the Cable Committee that oversees the operation.

Chapman’s part-time paid position at the station allows him to also work as a real estate agent. However, because his commitment to Sevastopol Television is a labor of love, he spends far more time than his official schedule requires. He records and edits many of the programs that air on the station, and because of present technology, can also manage station operations off site from his own computer.

He is proud of the fact that his is one of only two PEG stations in Door County, and of his priority programming: live events first, then local, then regional, followed by everything else. He urges subscribers of Charter Communications to call him (920.743.8400) if they have problems connecting with Sevastopol TV’s station.

Chapman believes that public access television fills an important gap in local news reporting. Green Bay TV stations may offer a sound bite of an event on the peninsula, but his station provides full coverage.

Because the programs may be viewed elsewhere, “they put us on the map,” he adds. The publicity instills pride and helps to draw a community together.

For a democratic society the coverage of local government provides an important transparency to decisions that impact citizens and, at the same time, includes a valuable record of transactions.

The Town of Sevastopol recently formed a historical society. Chapman feels that his PEG station is creating an archive of “history in the making,” recording local events and personalities to be saved for posterity as long as media storage techniques are kept current.

In the future Chapman hopes that Sevastopol School can once again become involved with the TV station. “I would love it if the school would work with us!” he said. Because the town hall is located physically next door to the school building, a cooperative program is a feasible consideration. With supervision high school students could assume a number of production responsibilities, subsequently learning communication skills that might lead to career opportunities. At the same time they would be promoting school activities, leading to more community involvement in education.

Charter Cable subscribers may view Sevastopol TV at channel 986/97, visiting http://www.doorbell.net/video for program listings. But everyone may watch programming at youtube.com/user/shermanbay as well as at the doorbell.net site.

Below is a sampling of programs offered this past year by Sevastopol Television:

• Celebration of Frances May at Miller Art Museum