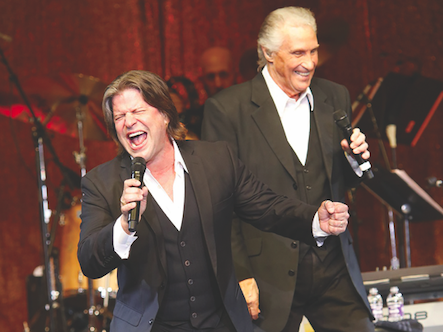 Drums drown out Righteous Brothers and rest of band

But I don’t think drums should be the lead instrument at a concert featuring vocals.

Unfortunately, that was the case at the July 22 Righteous Brothers concert at the Door Community Auditorium. The drummer might as well have been front and center instead of original Righteous Brother Bill Medley and his new partner, Bucky Heard.

The drum bashing drowned out their vocals. The drums drowned out the two horns, the two backup singers (which included Medley’s daughter, McKenna), the electric guitar (even during a guitar solo), the bass guitar and the keyboards. The drums appeared to be the star of the show, dominating and overshadowing any vocal nuances. You could hear every slam of the skin and tap of a cymbal while at times the singers might as well have been miming.

Still, Bill Medley on stage is living pop history. He paid tribute in a song to his late partner Bobby Hatfield (from Beaver Dam, Wis.), and Bucky Heard paid tribute to the high, manic vocals of Hatfield by singing the Righteous Brothers hit “Ebb Tide.”

Medley joked around, sang with his daughter the hit he had with Jennifer Warnes in the movie Dirty Dancing (“I’ve Had the Time of My Life”), touched on the R&B beginnings of the Righteous Brothers with their first hit, “Little Latin Lupe Lupe,” and several other songs from that era, did a solo tribute song at the keyboard to his old pal Elvis Presley, and promised they wouldn’t do an encore.

And how can you do an encore when you save the big one for the last song of the night – “You’ve Lost That Loving Feeling.” What could possibly follow that? What made that song work in the first place was the soulful vocals that here were pounded into submission by the drums.

I should add that this show was the first time I was seated in the balcony, right in the center, facing the drums. Perhaps the sound was different on the main floor. I hope so.