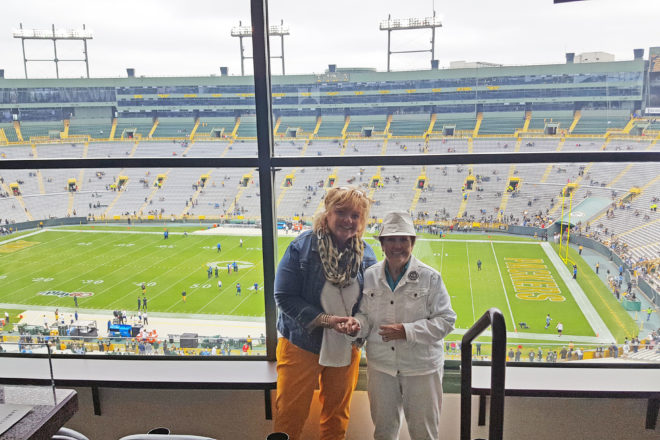 Given the chance to attend one game in Green Bay Packers’ history, past or present, you would be sure to receive varying responses from Packers fans.

Some may opt for the nostalgia of football’s early days, perhaps a game from the 1919 season, Green Bay’s first. Or maybe a game from one of the 13 world championships the Packers have earned, whether it be the six claimed between 1929 and 1944 or the five championships won during the Lombardi era of the 1960s.

Many could argue for the “Return to Titletown” season of 1996-97, where Brett Favre and company brought home Green Bay’s first Super Bowl championship after 29 years.

The list goes on: Favre’s inspirational performance in Oakland on Monday Night Football or his comeback win against Cincinnati in 1992, an Aaron Rodger’s “instant classic” of the 21st century, or 1983’s 48-47 upset victory over defending Super Bowl Champions the Washington Redskins on primetime television.

The favorite surely would be one of Green Bay’s championship games of the 1960s, 1967 to be exact. The “Ice Bowl,” Green Bay’s 21-17 victory over the Dallas Cowboys at Lambeau Field, earned Green Bay an 11th championship and an invite to Super Bowl II against the Oakland Raiders of the American Football League.

Most football enthusiasts or even casual watchers know of the Ice Bowl. The minus 13-degree temperatures and 48-below zero wind chill during the cold afternoon at Lambeau Field helped it to adopt the nickname “The Frozen Tundra.”

On Dec. 31, 1967, Elaine Hanrath attended what many consider to be the greatest game in Packers history and, arguably, the NFL’s. Hanrath’s now a 91-year-old Baileys Harbor resident and Packers stockholder.

For nearly half a century, 49 years to be exact, she would not witness the Green and Gold live in action again. In fact, she has not been to Lambeau Field for any reason since. Hanrath’s first and only visit to Lambeau Field was to the fabled Ice Bowl.

That stood true until last Sunday’s home opener against the Detroit Lions. Hanrath tallied her second visit to Lambeau Field, a 34-27 Packers victory over the Lions. Revisiting the Frozen Tundra brought back chilly memories of her last visit, when she was only 42 years old.

Sunday’s temperature was certainly warmer, 72 degrees and sunny, 87 degrees warmer than the Ice Bowl (and felt about 119 degrees warmer than the wind chill in the ’67 game). Hanrath hardly noticed the air temperature during Sunday’s game as she spent her time in a Lambeau Field suite, complete with a grand view. She watched alongside 80,000 fans cheering on their team, approximately 30,000 more in attendance than at the Ice Bowl.

“It was quite an experience to be that high” she commented. “When you’re up there in the suite, you get the whole panorama view. It was just awesome. It was so breathtaking that it was hard to keep my mind on the game.” 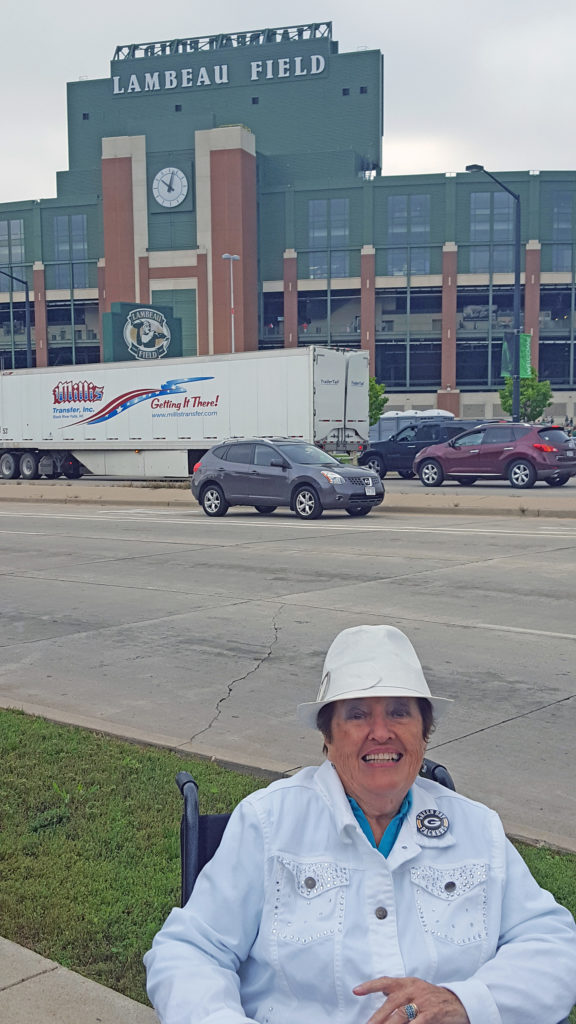 On Sunday, Elaine Hanrath made her first visit to Lambeau Field since the Ice Bowl. Submitted.

As for getting to the game on Sunday, Hanrath was in awe of how much has changed, particularly the parking.

“That was a whole new scene. I could hardly take that in. Miles and miles of homes and cars. Parking on lawns…that was all so new to me,” she said. “Frank and I just drove right into the parking lot where you went into the gates (during the Ice Bowl).”

Hanrath recalls her late husband, Frank, receiving the two tickets to the championship game in 1967.

“Somebody gave my husband, Frank, two tickets to that 13 below zero Packer game. He said to me, ‘Don’t you want to be where history is going to be made?’ He never let me know who it was that gave us the tickets,” she recalls.

Hanrath and her husband had a fine view of the action at the championship game. The couple was seated in the fifth row in the south end zone, the same end zone where Bart Starr would execute his game-winning quarterback sneak.

She admitted, “I didn’t even know what a quarterback sneak was, but I learned it that day.”

“I do remember that we were dressed to the teeth,” Hanrath recalls. “In those days, women were dressed in the finest fur coats; the fanciest outfits. You dressed for fashion, not for the cold.”

She noticed nearly everyone wearing green and yellow last Sunday, which was quite different than her experience 49 years earlier. She recollected the outfit worn at the championship game.

“I happened to have a three-quarter length coat where the skirt and coat were matching material. It was a cobalt blue and I had a hat that matched the outfit,” she said. “The fact that girls did not wear pants, you had nylons, it was almost as if you had bare legs. There was no ‘jump around’ or ‘the wave’ to keep you moving.”

The cold that day led to frostbite for players, coaches and fans alike. The officials’ lips were said to be frozen to their whistles, leading them to bleed. The Ice Bowl was the coldest NFL game ever played.

A legendary game, not likely to be matched, featured coaching greats Vince Lombardi and Tom Landry, with their equally legendary quarterbacks, Bart Starr and Don Meredith, in a battle of will and test of resilience.

Following the climax of the game, Bart Starr’s go-ahead quarterback sneak to put Green Bay on top, 21-17, Dallas had a mere 13 seconds to answer back. The waning seconds, with Don Meredith’s final heaves, ticked off the clock as Green Bay called themselves NFL Champions for the third straight season.

After the game, spectators stormed the field, including several who took down the goal posts in celebration. Most fans left Lambeau Field with the warmth of a championship and the hope that their vehicles would start in the frigid temperatures.

Elaine’s story, two games: 49 years apart, is just one of many unique tales of her interesting life. Sunday’s game added to her collection of fond memories.

“I can’t thank Jim and Colleen Christensen of De Pere enough for allowing me to go,” she said. “I feel so blessed in my life.”