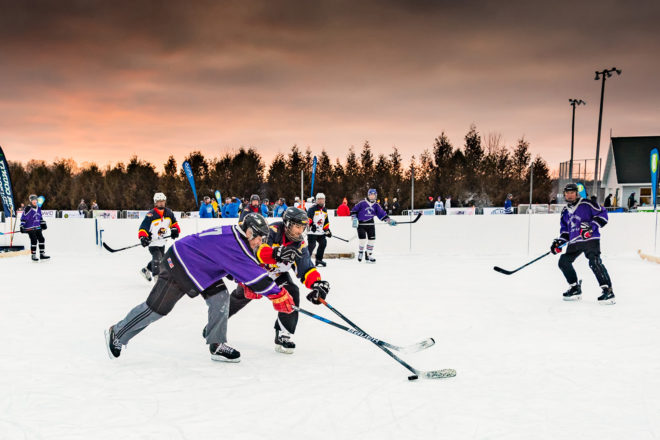 Locals and visitors, experienced and recreational players all find a place on the ice during the Door County Pond Hockey Tournament. This year, 49 teams will compete for the championship. Photo by Len Villano.

When you live in Door County year-round, out-of-towners often ask, “What’s there to do in the winter?” On Saturday, 49 teams will take to the ice for the 2022 Door County Pond Hockey Tournament, clearly demonstrating to both locals and visitors that the fun doesn’t stop at the end of the summer. It’s just getting started.

Pond hockey, a modified version of hockey typically played on ponds and lakes, is played on smaller rinks consisting of short sideboards, no goalies and just four players to a side. Teams in eight divisions will compete on five rinks at the Teresa K. Hilander Community Ice Rink in Sister Bay, with the winning teams taking home the coveted Stanley Thermos trophy.

But behind the scenes, dozens of volunteers have been at work long before the temperatures in Northern Door dipped below freezing.

Jordan Burress, the event’s registration director, said registration has typically opened the June before the next year’s tournament, but in 2020, event organizers decided to open it as soon as that year’s event had ended.

“We were pleasantly surprised with the number of teams that registered that first week,” Burress said. “Most teams want to get in as soon as possible, which helps us with the planning.”

That planning includes everything from organizing the game schedule to recruiting scorekeepers to ensuring the rinks get made – a task that’s easier in some years than others. In 2020, for example – the last time the tournament was held – poor ice coverage on Kangaroo Lake prompted a last-minute move. It was only because of the help of volunteers and careful planning up until that point that the puck still dropped right at 8 am the morning of the tournament.

“We put in many, many hours flooding the surface using a fire hose round the clock, right up until the tournament started,” said Cole Vanderleest, one of the tournament’s lead organizers. “As long as we have good ice leading up to Saturday, this year will go much smoother.”

That’s not to say that creating the rinks is an effortless feat, even with moving the tournament to its new home and a more traditional skating surface. Planning the rinks, taking inventory of the boards used in the previous tournament, fixing or ordering replacement boards if needed, and constructing the rinks takes weeks of logistical gymnastics and plenty of helping hands.

Then there’s making the ice.

“Before two years ago, I never made ice,” Vanderleest said. “I just thought you took a hose, turned it on and let it flood the surface.”

It turns out, creating that smooth-as-glass surface – or something as close to that as possible – requires technique and a whole lot of patience.

“It takes several hours,” Vanderleest said, explaining the process of using a fire hose to lay thin layers of water onto the rink surface in 20-minute increments and allowing the layers time to freeze in between.

Simon Hedeen – a longtime player whose team the Fitzgerald Freighters has participated in the past six tournaments and won the championship in four out of the past five – said some of the ambience of pond hockey is lost playing on a more traditional ice rink, but it also gives the volunteers in charge of creating the rinks a little more control over Mother Nature.

“When you’re out on a pond, it’s an ice surface that you don’t know what you’re going to get,” Hedeen said. “It’s never as smooth and consistent as a traditional rink. Not to mention, in this tournament, usually the best ice conditions are the first game of the day.”

During the later games, cracks and grooves made in the ice during the course of play create an additional layer of challenge for the players. But Vanderleest and the rest of the rink crew keep a few tricks up their sleeve to keep the surface playable, which is admittedly easier to accomplish on a rink versus a natural body of water.

“If a player finds a hole, you patch it as soon as you can using some snow and water,” Vanderleest said.
“You put some snow in a bowl, add some water, then use your hands to pack it as hard as you can into the hole.”

It’s no Zamboni, he said, but it works like a bandage that will freeze over and make the surface playable.

Although the ice at the outdoor rink is more predictable than the ice on Kangaroo Lake, it isn’t perfect because it can’t be. But that’s part of the fun.

“It’s an entirely different ball game from playing on an indoor rink,” Hedeen said. “It levels the playing field. It takes a really finesse player and brings them down a notch, and gives a really hardworking player a bit of a boost.”

Several of the players on Hedeen’s team, including Hedeen himself, have played competitively.

“We’ve got a pretty deep roster, but if you get outworked on the ice, you’re not going to win,” he said. “It’s one of the most hard-fought battles for the championship.”

In the middle of that battle stands another group of volunteers: the scorekeepers. Extensive knowledge of the game and skating skills are not required to fill this volunteer position, but a tolerance for the cold certainly helps.

“In years past, the temperatures were in the single digits, and even colder in the morning,” said Jeff Matson, whose search for fellow hockey players when he first moved to the area led him to the tournament.

“I figured if I didn’t have a team to play with, I would do the next best thing and volunteer,” he said. “At least I’d be able to watch people play.”

Matson typically keeps score for 10-15 games over the course of the day, which translates to several hours spent standing in the cold.

“You’re standing around for 30 minutes at a time,” he said, “so having the right gear on and keeping the blood flowing is important.”

But more important than that is having an attitude of fun.

“You’ll have one or two people who end up being a little aggressive out on the ice, but really, it’s a bunch of people just having a good time,” said Brian Ferrie, who volunteered as a scorekeeper for several years. “It’s a cool camaraderie thing. Every year you meet new people.”

“It’s just as neat an experience to go out and watch it as it is to participate,” Ferrie said.

Matson added, “Behind the scenes, we are all just people who enjoy being outside. Some of us just use it as an excuse to watch hockey.”

If you do head to the tournament on Saturday, Matson made one request:

“If you see a scorekeeper, don’t forget to offer them a beverage!”