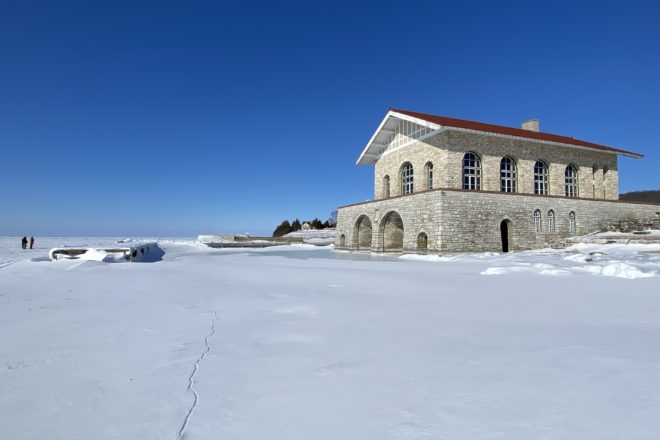 The route to Rock Island State Park was a welcome sight for the group, whose members had walked from Washington Island’s Jackson Harbor and back.

I’ve always been a big fan of winter. This year, much of January was cold and led to good ice conditions on area lakes. Once February rolled around, I was itching for a trip to Washington Island to see what the big chill had done to the water up there. In particular, I wanted to look for ice shoves and walk to Rock Island.

I contacted the most reliable person I know for intel on the icy waters around Death’s Door: Hoyt Purinton. He responded to my email by saying, “As luck would have it, my boys just got back from Rock five minutes ago and report good ice. Folks have been hiking, skiing and snowmobiling over for two weeks or more, and I’m seeing no real thaw on the horizon anytime soon that would foul things up.”

That was just what I was hoping to hear. I made a reservation on the winter ferry and booked a room at the Townliner Motel for Valentine’s Day.

February 14 turned out to be a gorgeous winter day. An overnight low temperature of -5 degrees F brought clear skies and light winds.

Captain Jeff Cornell and his crew of two directed my car and others toward the front of the Arni J. Richter. Behind the cars came a pickup pulling a very long trailer, a truck filled with a heaping load of firewood and just enough room for a box truck that ended up hanging over the back edge of the boat.

The ice-breaking ferry made it across Death’s Door with no difficulty.  More seasoned travelers remained inside their vehicles during the crossing, but I love to be out on the deck taking in the dazzling winter scenes and absorbing the crunching sounds the ice makes as the boat vibrates and plows ahead.

People’s Park is a tiny piece of public access on Washington Island’s northwest corner. The view from the edge of the bluff there revealed a sea of brilliant Aqua Velva–blue ice shoves. I made my way to the isthmus of land between Little Lake and Green Bay to get a closer look.  I am mesmerized by the jumbled piles and their amazing colors that are set aglow in the sunshine.

At 12:30 pm sharp, I met Steve and Laura Waldron at Jackson Harbor.  We had agreed to meet there so we could walk over the ice to Rock Island State Park. Islanders are rarely late because they’ve been well trained to follow ferry schedules, or they’ll miss the boat. Robert Herbst, Doug Hansen and John Larsen also joined us.

Some of us donned Yaktrax for added traction. Other precautions included having a charged cell phone, marine radio, throw rope, ice picks, hand and foot warmers, water, snacks and layers of warm clothing. Always remember that no ice is ever 100% safe.

It’s a mile or a little more to get from Jackson Harbor to Rock Island. I enjoyed the companionship of the others during the walk because not only did they provide friendly conversation, but they added a sense of moral support. We were following the route taken by the Karfi, a ferry that transports passengers to and from the park through open and deep water during the tourist season.

As we passed a red-and-green buoy frozen into the channel entrance, we were truly out in another world. Patches of smooth ice and intermittent snow were occasionally marked with snowmobile tracks. We also saw frozen paw prints. Could a wolf or a coyote have trotted by here, too? Pancake ice is what really piqued everyone’s curiosity. Round ice disks had been blown into the area and were then frozen into place as frigid winter temperatures continued to deepen.

Soon we arrived at the Thordarson Boathouse, surrounded by winter’s magnificent glory. The pier was glazed over in ice and surrounded by wind-driven snow. It appeared that a Zamboni had just smoothed a frozen rink inside the arched openings of the boathouse. It would have been a skater’s delight.

To me, experiences like this are among the most precious in life. We soaked in the memories and recorded them in photographs. I was thankful for the splendor of the day, the companionship of my fellow adventurers and the safe return to solid ground back at Jackson Harbor.