Where some see a chilly, relaxing hobby and others see a way to feed the family in the winter, Nick Oram sees TV gold.

“[Ice fishing] has all the trappings of a great sport,” Oram said. “It’s dangerous. It’s challenging. You’ve got one hole rather than an entire lake to try to catch fish. You have weather conditions, you have personalities on the ice and you’re in much tighter quarters than an open body of water. All those things create something very unique, and that’s the world and sport of ice fishing.”

Oram is producing a TV show called Ice Wars, a reality show about ice fishing in Northeast Wisconsin – in Lake Winnebago, Green Bay, Sturgeon Bay and other nearby lakes. He’s done initial filming, created a pilot episode and is choosing a network to work with. 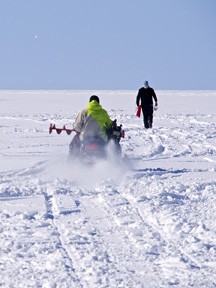 The show will focus on the characters Oram met on the ice, the guides and local enthusiasts, and follow them through the bad weather, big catches and arguments that go with fishing.

“There’s an unspoken, and in some cases spoken, battle between the guides and the locals just to the territory,” Oram said. “These ice anglers are making their marks on the ice and staking their territory.”

It may sound dramatic, but fishing guide Lonney Goman said there’s truth to the concept.

“Competition is pretty fierce,” he said. “You have a handful of guides competing for customers from all over the Midwest. We have a short season to make money.”

Goman, who owns Trophy Ice Fish, is working with Oman on the show. He wants more exposure for local ice fishing and thinks a show about the sport could be just as exciting as Deadliest Catch on the Discovery Channel or Duck Dynasty on A&E.

“Nick’s trying to portray the Midwest a little bit and he said our story needs to be told, what goes on here around the Great Lakes and the Midwest,” Goman said.

Fighting for good spots, guides cutting their prices to beat the competition and dangerous conditions are just some of the issues Goman sees on the ice. He also said there’s tension between hobby anglers and fishing guides. 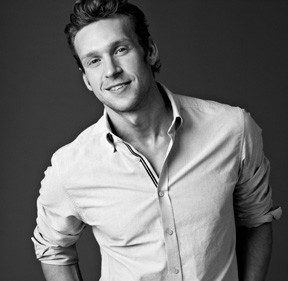 “When they see guides coming in to enterprise the area they get upset,” Goman said. “Now their spots where they’ve been catching fish they think are ruined or overfished because we’re making money on their spot, so to speak.”

But he hasn’t always been in the city. Oram grew up in Sturgeon Bay, surrounded by hunting and fishing, and can’t wait to get on the ice when shooting Ice Wars.

“I’m really waiting to catch a trophy walleye,” he said. “That’s really exciting to me. I see these huge fish these guys catch.”

The show’s future depends on which network Oram works with. He plans to shoot more video during the ice fishing season and edit the footage simultaneously, and have the show wrapped up in spring. He doesn’t expect the show to air until fall 2014.

When it does, Oram hopes it will show the culture of Northeast Wisconsin from the ice – “the struggles, the irony, the competitiveness, the sheer sport of ice fishing.”