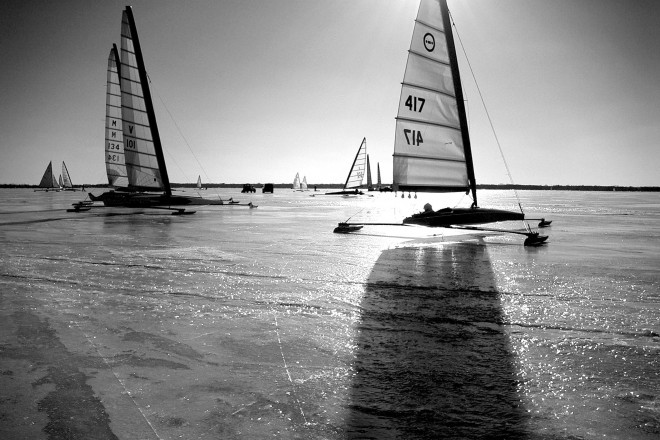 The scene is late December. Whistling winds breathe freezing temperatures upon the Door County winter landscape yet not a flake of snow has fallen.

On a bed of ice from an inland lake a distant thunder may be heard from an oddly shaped craft traveling at a remarkably high speed. To be on the ice in the presence of such a creation as it roars toward take-off velocity is an awe-inspiring experience. The runners skid along the surface and you feel the ice below your feet rumble through your entire body while the deafening sound of wood, metal and ice fly past and dissipate without so much as a breeze. Some compare it to standing at the end of a runway and having a commercial jetliner scream overhead at takeoff, only iceboating seems so much more ethereal and surreal. How can it be going so fast in such a light wind? Short days, brown fields, gray skies and bone-chilling cold are the womb from which iceboating is reborn for its very brief season each year.

The origins of the seldom publicized sport of iceboating date back to the necessity of moving cargo over large distances during the winter months. Such occurrences were commonplace in Door County during the late 19th century when fishermen, lumbermen and builders would attach square sails to their sleds to assist their horse teams in moving cargo between Menominee, Michigan and Fish Creek. Regular trade routes were marked along the ice by well-placed Christmas-tree-sized pines for the travelers to follow. At that time speed was not the primary goal of the ice sailor, rather it was the safe and efficient movement of materials from point A to point B. The sleds in those days could travel on both ice and snow and were simply aided by the use of square sails and a lucky wind at the backs of their drivers.

Nowadays, the ice should be perfectly smooth in order to iceboat to maximum potential. The runners will not run on snow and they cannot be sharpened with a commonplace knife sharpener. Therefore, while most winter sports enthusiasts will bemoan cold snowless days spent looking at their sleds and cross-country skis with longing, the iceboater will revel in their good fortune of having the precious, short-lived and perfect combination of cold wind, smooth ice, and no snow.

According to Bjorn Johanson (BJ), one of Door County’s most well established iceboaters, the actual sport of iceboating arose from the ashes of the old trade routes and from modern advances in sailing technology to what it has become today. Predating the gas engine, the sport holds special meaning due to the craftsmanship involved in creating an iceboat vessel and sailing it. “Winter is such a gray time of year,” says BJ with his Australian accent. “We learned how to make do with what we had around us. When you sail with a club there is so much camaraderie. You can make a real great time of it. Everyone pitches in and we are not polluting the environment. It’s a nice way to go.”

Unlike “soft-water” boats which are manufactured by any number of boat companies for summer use, an iceboat is, 90 percent of the time, crafted by the hands of the people who sail them. According to BJ, “When I started iceboating in the late ‘60s I came across a couple of skeeters and was able to scab together a few parts and pieces to make one go.” While he contends that the boats themselves are not a “personal-type thing” he does admit that “you got to be careful about things when you use them. No one in our club owned the club boats because of liability issues. In many cases these things are so old that it’s likely the guy who created them is already dead.”

Today hobbyists will spend days and weeks of the off-season (summer) measuring and cutting molds and jigs for their fuselage. In a haze of paint, varnish and teak fumes obscure parts such as the plank and the runners are fastened together to create any number of one-design craft that are often raced in annual regattas throughout the Midwest. Groups of builders have been known to rent warehouse buildings and build three or four boats in one swoop.

Perhaps the easiest and smallest craft for an individual to create is the DN design. The plans were first published in the Detroit News (thus the boat’s name) and feature a simple combination of wooden parts that may only take a semi-skilled amateur under 100 hours to piece together. Runners, sails and rigging may still be ordered over the Internet through independent distributors who manufacture the essential, hard-to-come-by parts for hobbyists. These distributors are often craftsmen who have taken their skill to a quasi-professional level for the sake of preserving the sport for others.

While iceboating and sailing share similar attributes, the skills required of each sport are quite different. First, with iceboating, it is imperative that you have the capacity to withstand any amount of cold Mother Nature brings. Assembling an iceboat means standing in absurd cold to work with dozens of metal parts as they freeze to the icy nubs that were once your fingers. Then, with enthusiasm running deep within, you don a crash helmet and hurl yourself at speeds of 60-100 mph straight into the frozen breath of what has already frozen you straight to the bone.

While onboard the world around you becomes a cold-induced frozen mesh of potential danger and extreme speed. Where subzero wind has blown protection off your face, shards of ice trailing off the lead runner peck your now-exposed flesh, which will later bleed through your wind-burned cheeks like a dozen bad shaving wounds. Thoughts race: Will the runner catch an edge? Will the wind overpower the boat, sending half of the plank skyward? Which direction will I turn when that happens? How thick is the ice ahead? Is it safe? Where are my cohorts and are they aware of where my boat is? Are they heading straight for me at 100 mph? Between these thoughts and the bitter cold comes the pure exhilaration of speed and the utterly addicting nature of the sport.

Not too surprisingly, heading back to shore for a warm-up gets included in such thoughts but not until you absolutely cannot stand the cold for another second more. Returning to a warm-up hut to observe other comrades zipping around the ice like maniacs brings one to reflect on their own humble bragging rights of survival that day. Among such a small group only a mutually shared experience can bring such glory. For unlike sailing, iceboating is a one-person show. With the exception of only a few classes of iceboat (the Nite and most Stern Steers), iceboats are a solitary sporting experience with room for only one person: the driver. Clubs, race circuits and iceboating groups exist for the camaraderie and for the safety of their membership.

Clubs survive through teaching safety, offering advice to iceboaters, and keeping tabs on the comings and goings of its members. “We used to keep a rowboat on top of our warming hut back in the day, along with extra lines and life jackets, just in case,” says BJ. “There are tons of stories, rescues and moments of glory. In the early season when the ice is still forming we would sail on a skin of ice along a two-mile stretch of shore where the water is only two or three feet deep. If you go in there it’s no big deal, you get wet and it wrecks your day until you change into different clothes. At the end of the season you might get a trophy for being an idiot. It’s all in good fun.”

But deeper water obviously exists and the risks of hypothermia and exposure are not lost on such a crew who many onlookers already consider to be insane. Knowing about a lake does not equate to knowing about ice. Ice conditions change by the hour no matter where you sail. There is no magic to “knowing the conditions”– it takes a great deal of careful observation and communication between club members in order to stay safe. Still, accidents do occur. Boat runners find cracks in the ice that come out of nowhere, splitting planks and sending splinters of wood and often the vessel’s pilot careening along the ice for hundreds of feet before coming to a stop. Capsizing an iceboat happens so fast the only thing you see is the ice hitting your helmet. Then there’s full submersion into weak ice, where the seldom worn life jacket comes in very handy – as do a set of bear-claws worn around the neck which pull apart to reveal two picks used to bring oneself back to the ice surface. No matter how many club members might be sailing around, you will still have several minutes to yourself, alone in the water, to make important decisions.

The safest way to iceboat is to race on an established course with a group of similar boats. An iceboater in Madison’s Four Lakes Ice Yacht Club had this to say about safety: “We stick together out there. It’s usually a non-club member who is unfamiliar with the ice and unaware of our club who gets into trouble.” While deaths from iceboating are extremely rare, even in instances where iceboaters break through the ice, it is still a very serious environment that commands a great deal of respect. The unthinkable can occur, as it often does in the ice-fishing and snowmobiling communities each year. Being on the ice alone is never a good idea. Always, always go with someone else, even a spotter. Let someone, especially club members, know if you have a medical condition that would create an emergency in and of itself.

BJ continues, “When it comes to iceboats – you can’t buy these things. They are not commercially made. It requires some ability to construct them and you have to be aware of the history and the elements. Then you get to take it out onto the ice and race your effort. It’s a way of testing yourself and your ability. I’ve found few sports in life to be as rewarding.”

To experience iceboating in Door County, bring whatever iceboat parts Great Uncle Larry or you have lying around the garage attic and meet at the banks of Kangaroo or Clark Lakes or on the Sturgeon Bay coast near Sunset Park when the ground is brown and the air sticks to your nose hairs. There you will find a group of individuals who will be short on talk but quick to show you how fast their boats will go. If you don’t see them there, don’t go. Finally, when the brown days of winter start nagging, know this: amidst the camaraderie, the wood-smoke haze and the din of laughter of an iceboating warming hut, you’ll never meet a more disappointed group as this when the first snowflakes start to fall, putting an end to another fleeting season of iceboating.

Dedicated to the memory of John Redmann, friend and iceboater.