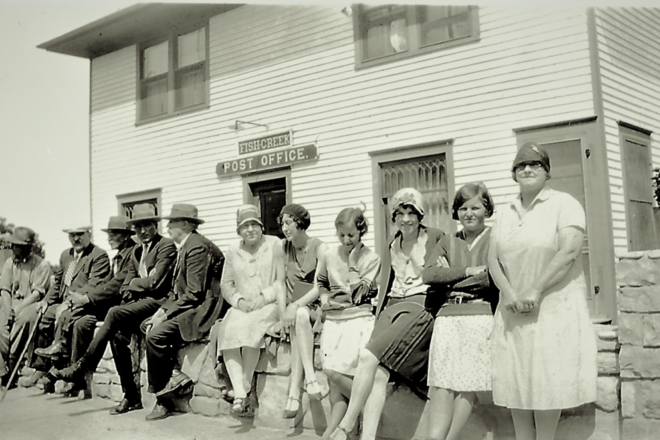 In addition to sending and receiving mail, the post office, which the Kinsey home at 4148 Main Street in Fish Creek served as from 1915-1935, also acted as a gathering place where residents could visit and catch up with each other. Photos courtesy of the Kinsey family collection.

Fish Creek’s Kinsey property and its role in heritage tourism

What gives a community its sense of place? Is it the people? The scenery? The history?

The answer “all of the above” would be correct to some extent, but a 2022 survey by the online travel-planning firm Priceline reports that one-third of Americans say that heritage travel – “the experience of traveling to a destination to experience artifacts and activities representing the stories and people of the past and present” – brings more meaning to their travels. Even more interestingly, it’s the younger tourists – ages 18-34 – who are showing the highest interest in heritage tourism.

It’s lucky for them that the towns and village centers in Door County continue to be destinations where residents and visitors alike can connect with the past through the historical buildings, parks and sites that shaped those communities.

In Fish Creek, the Kinsey home at 4148 Main Street is one such property, illustrative of a time when Fish Creek was still a fishing village, but coming of age as a tourist destination.

“The first thing you need to know about Fish Creek is that it was a small fishing village for the longest time,” Barbara (Kinsey) McKesson said. “But if you came down the hill and turned left, toward Cottage Row, it became the area that was summer homes, tourists, motels, that kind of thing.”

The separation of business and pleasure is evident in old photographs that show the waterfront surrounding the Kinsey home lined with fishing nets and stacked five feet high with cordwood that would then be loaded onto the steamers docked in the bay. While the fishing and timber industries occupied the outdoor area of the property, the home itself functioned as one of the village’s early post offices.

“It was built as a home, but it functioned as the post office from the time it was built until about 1935,” said Nancy (Kinsey) Sargent, the eldest of Roy and Virginia Kinsey’s four children. It was Roy’s uncle, Alson Kinsey; along with his wife, May Thorp Kinsey, who built the Prairie-style home in 1914 on land deeded from the United States to Charles and William Claflin in 1854. In 1915, May was appointed postmistress by then-President Woodrow Wilson.

Back then, McKesson explained, it was customary for the local post office to be in someone’s home. In fact, the Kinsey residence is one of several buildings of historical significance that served in that capacity, among them the Alexander Noble Home and the buildings that currently house Fred & Co. and Hide Side Boutique. Standing in the current living room of the Kinsey home, one can still see the outline of the pass-through – now disguised as a built-in shelf – where Fish Creek residents would collect their mail.

“This was where you would come to get your mail,” McKesson said, gesturing to the arched, recessed shelf.

“And over there,” she continued, pointing to the adjacent room, “was Aunt May’s office.”

While tourism grew up around the house, the side of town where the Kinsey home sat remained the working part of Fish Creek’s waterfront area well into the mid-1900s, thanks, in part, to that side of the bay’s safe harbor and easily accessible pier.

McKesson, who grew up in the home with her parents; two older sisters, Nancy (Kinsey) Sargent and Andrea Kinsey-Jauquet; and younger brother, the late Charlie Kinsey, remembers her father mending fishing nets in their backyard as well as in the vacant lot next door.

“You’d see the pond net stakes, and some people would be drying their nets,” McKesson recalled. “But what ended up happening was more and more people visited this side of the bay and loved Fish Creek.”

By the 1950s, tourism had become the primary industry in the village. But it was Aunt May who, ahead of her time nearly 15 years earlier, had inadvertently planted the seed for what became a multigenerational vacation getaway on the property.

“One of the things that Aunt May told Uncle Al was that she wanted to be closer to the water,” McKesson said. “So he ordered the Sears Roebuck cottage, now the Shorehaven, in 1934.”

Alson Kinsey added the screen porch and stone fireplace, still in existence today, to the cozy, one-bedroom cottage perched on the then-natural shoreline – with the water, at times, lapping at the edge of the porch.

“She wanted to be close to the water, and close she was,” Kinsey-Jauquet said. “At times she was almost in it!”

Two summers after constructing her waterfront hideaway, May received a letter from a woman in Chicago inquiring about renting the cottage during the upcoming season.

“She asked if it had rugs and refrigeration – it was just kind of a fun letter,” McKesson said of the correspondence.

May Kinsey agreed to rent the cottage, and the rest – as they say – was history.

When Roy and Virginia Kinsey purchased the property in 1950, another cottage, The Holiday, was added, along with some modifications to the circa-1925 coach house that, until then, had functioned as a garage.

“Before then, it was just ‘Mrs. Kinsey has a cottage’ kind of thing,” McKesson said.

For the next several decades, Roy and Virginia Kinsey operated Holiday Harbor Waterfront Cottages while continuing to run The Summertime gift shop – another Fish Creek architectural landmark – located in the building that Barringer’s occupies today. From the 1950s until its last summer in operation in 2021, Holiday Harbor welcomed generations of families to a slice of quintessential Door County.

“That is very typical of a lot of these places here in Fish Creek,” Kinsey-Jauquet said. “Families would return generation after generation, and often the families that stayed here would become friends with the people who stayed next door.”

The property and its structures, like many in Door County, offer a glimpse into the past. They’re an example of how residences supported their local communities, and how families found ways to adapt to and coexist with the growing tourism economy by highlighting the distinctive charm and offerings of the area.

With the property purchased by the Town of Gibraltar in late 2021, the fate of the historical home and cottages remains in limbo, despite being part of the village’s guided historical walking tour. Although generations of memories may make the Kinsey family a bit biased, there’s good reason for them to hope that the home and cottages will remain a fixture of Fish Creek’s architectural landscape and history.

“Everything today seems so transient – it comes and goes,” Kinsey-Jauquet said. “In Europe, people live and work in buildings that are three [hundred] and four hundred years old. Here, we tear them down and start over.”

She continued, pointing out that preserving historical buildings within a community, including Fish Creek, fosters a shared identity for both residents and visitors through the stories attached to the physical structures. With heritage tourism poised for a postpandemic boom, some communities may want to rethink letting the adage “Out with old and in with the new” guide their community planning and development.

“When people come here, and come often here, they develop a sense of belonging to this community,” Kinsey-Jauquet said. “And to know the history of this place, well, that only strengthens that.”