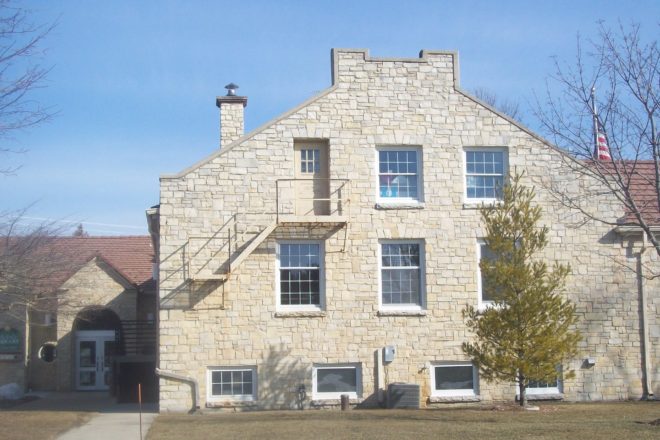 The two windows on the top floor of the Baileys Harbor Town Hall were part of the small apartment that housed the building’s caretakers and others, 1938-1965. The kitchen was on the right; the living room was in the middle; and a tiny bedroom with a steeply slanted ceiling was on the left, with a door to the fire escape.

Unless you grew up in Baileys Harbor or have been there for 60 years or so, it will probably surprise you to learn that people used to live – and in some cases, raise their families – in a tiny apartment above the town hall. And, you probably won’t know that for a few years, people climbed the stairs inside the building’s east entrance to see their doctor.

The “new” town hall, funded by a bequest from Michael McArdle, was dedicated on Aug. 1, 1938. Louis Hickey was its first caretaker, and he; his wife, Minnie; and their son, Jim, were the first residents of the three-room apartment.

In 1907, Louis had joined the Lifesaving Service, which became the Coast Guard in 1915. The Hickeys lived in the town hall apartment until May 1945, when, according to an item in a local newspaper, they bought “the north lake cottage from Bernard Walter.”

When the Hickeys moved out, Victor Meyer became the new caretaker, and he; his wife, and their baby boy moved in that summer.

Leann Despotes, a Bailey’s Harbor native, said that Victor worked for her dad at his service station, where the town marina is now. She also recalled that Victor raised rabbits and sold things made from rabbit fur, including a muff for her. The Meyers were devout Catholics, and the three older children – Ronald, Theresa and Cecilia – attended mass before school every day. The girls were not allowed to wear pants, even on the coldest days, and their lunch was often “sugar sandwiches.”

An item in the local newspaper on April 25, 1947, announced that the Victor Meyer family had left the apartment and said that Mrs. Victor Meyer and the children had gone to Ladysmith to stay with relatives “until they find a place to live here.” The same newspaper item noted that Henry Meyer – no relation to Victor – had assumed the caretaker’s duties, and that he and his wife, Irene, had moved in.

Irene, now 92, still remembers the apartment well. It had a living room, a small bedroom, a kitchen “just big enough for a stove and refrigerator and a “bathroom” with only a toilet.  It was crowded,” she said, “but we were just married and very happy. We were used to making do.“

Daughters Julie Ann and Jane Ellen were born during the five years when the family lived in the apartment. Asked how she handled laundry with two babies, Irene laughed and said, “Very carefully. There was a wringer washer in the basement, and I had to run a hose from the shower room across the hall. There were some clotheslines out back where the library is now and also lines window to window in the basement. If I had to fire up the furnace – oh, boy! Coal dust all over the just-washed clothes.”

Irene also remembers loading the babies in their buggy and going to the post office and grocery store every day.

Leann remembers seeing Irene take the little girls outside to play on the lawn – “so beautifully dressed, with bright white baby shoes and perfect hair. They looked like dolls to me. And Irene was a very pretty young mother, too. It looked like a scene out of a movie.”

“The girls were five and three and a half when we left the apartment in October 1952 and built a little house on County F,” Irene said.

Although there is no record in local newspapers, Larry Hanson, son of Eben Hanson; and his wife, Jean, sister of Olivia Traven, were the next occupants of the apartment, 1952-55. Larry signed up to be a “sky watcher” in Baileys Harbor during the Korean War. He was also a constant presence in the newspaper’s sports pages as a pitcher/manager for the Sturgeon Bay Athletics, Institute Cubs and Baileys Harbor Harborites and as a golfer, tying for first in the Door County Amateur Golf Tournament in October 1954.

Jean participated in activities at the Catholic church, was a member of the Women’s Club and sometimes filled in as librarian when Olivia was on leave.

Alice Merkel remembers that the Hansons moved out just before she and her husband, Fritz, moved in in October 1955. Fritz became the new caretaker and also worked at the Maxwelton Braes Golf Course. Alice, now 85, said the apartment was “small, but nice.” She recalled that they had to use the shower in the basement “and hoped no one else came in!”

The newspapers of the day apparently didn’t take notice when Dr. Charles Sargent set up his office above the town hall, but in December 1959, it was reported that he – along with Edmund Collins, Wayne Williams and Fred Traven – were installed as new members of the Baileys Harbor Lions Club during the Christmas dinner party at the Florada (the forerunner of the Florian II supper club).

The only other reference to Dr. Sargent in local papers was on April 5, 1962, when Baileys Harbor correspondent Kitty McNeely reported that at Tuesday’s town meeting, it was voted to invite Dr. Sargent – then serving in northwestern Wisconsin – to return to Baileys Harbor. There was no explanation of why he had left or why he was being invited to return.

Leann remembers the doctor as being very young.

“I don’t think most people ever really accepted him,” she said. “Although Baileys Harbor was pretty thrilled to have a doctor, somehow it didn’t work out. My most distinct memory of him was his frequent trips to get a foot-long hot dog and walking back to the town hall munching on it. That was quite a topic for conversation back in the day.”

As far as can be determined, the late Roy Lukes was the apartment’s last resident. He was The Ridges Sanctuary’s first manager and naturalist during the summer of 1964 and again in 1965, and he occupied the apartment during both summers. His widow, Charlotte, said he described the place as being hot and stuffy.

In 1966, Olivia Traven may have been instrumental in helping Roy to secure a teaching job at Gibraltar, and Emma Toft paved the way for him to move into the Upper Range Light at The Ridges Sanctuary.

For the last 55 years, the old apartment has been used for storage. If the walls are talking, they’re whispering to Christmas decorations, old No Parking signs, and boxes and boxes of who knows what else.