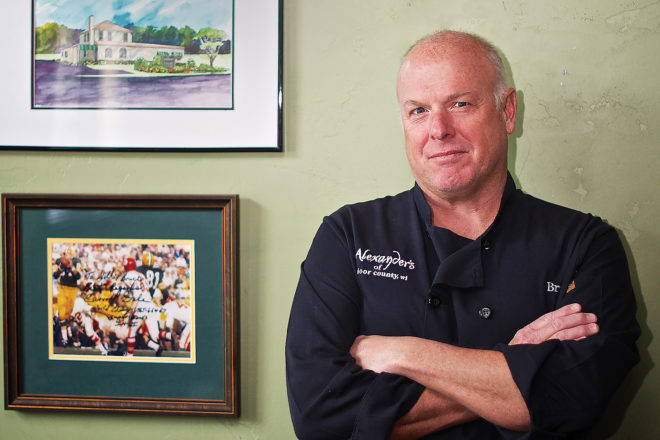 Bruce Alexander of Alexander’s of Door County credits his mother for setting an example for him of giving back to the community.

“She was always giving an extra hand. That’s just the way she was. She could never say no,” the Fish Creek restaurateur said. “Of course, I don’t say no. If you come through the door and see me eye-to-eye to talk, you’re in. People who send me letters and I don’t know them, no, unless it’s stuff we believe in. You’ve got to come in and tell me what it’s all about.”

The list of causes and events Alexander, his wife Jill and their restaurant has supported is testament to his inability to say no.

“I think what you give back to the community is important. A lot of people open a business in Door County, they’re looking to get rich. I’m looking to give back,” Alexander said. “My kids are being raised here. They’re younger. I started later in life. My philosophy is, if you can afford to do it and still make a business work, do it. There are a lot of people who need help. I just look at it, it’s a rich environment. People would give anything to live in Door County. No doubt about it, but trying to make a living up here, it’s tough. Not everybody has that luxury. I know people who are struggling but doing the best they can, so why not give back.”

He recalls the first event he got involved in was for the Peninsula Preschool when he was still the chef at Hotel du Nord, before he began leasing the restaurant in 2000.

“We’ve been doing preschool fundraisers ever since,” he said. “That’s Miss Leslie (Leline) over at Peninsula Preschool. Both my girls went there. We do Trivia Night here as well (for the preschool). That’s a big event. It’s packed.”

Gibraltar School and the Friends of Gibraltar have also benefitted from the Alexanders’ largesse, as have the Gibraltar Fire Department, the Gibraltar High School baseball team, the Senior Resource Center, Lakeshore CAP and Scandia, to put names to a few.

“This year my wife, Jill, was asked to do the concession for girls basketball. One of our girls is in fifth grade basketball. So she did it. It was a little more upscale, and she raised $2,500. We gave everything. I didn’t charge anything for the food. I work with my purveyors quite a bit.

“Another thing big to my heart is the Scandia Golf Outing,” Alexander continued. “That started years ago. We did it at Maxwelton Braes. I did all the food at Nord and brought all the food over to Maxwelton Braes and served it there. We did that for years. Now we serve it here.”

“Another thing big to my heart is the Scandia Golf Outing,” Alexander continued. “That started years ago. We did it at Maxwelton Braes. I did all the food at Nord and brought all the food over to Maxwelton Braes and served it there. We did that for years. Now we serve it here.”

“Chris said they’ll take all they can get. That’s great because in the summer we are just overloaded,” Alexander said. “As long as you live a comfortable life and can give back, give back.”