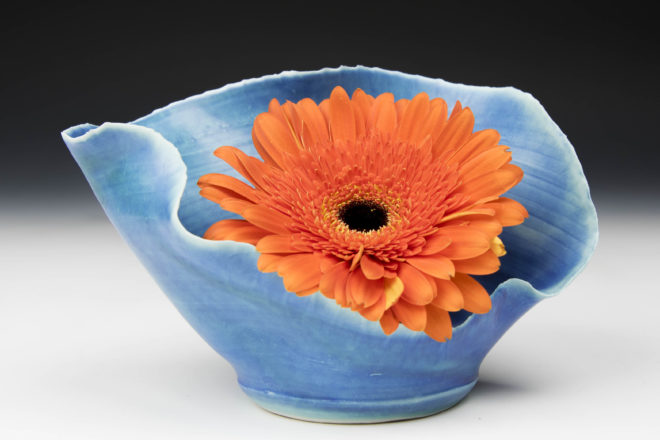 Despite a fresh heaping of snow on the Door Peninsula, potter Chad Luberger is thinking spring with a new crop of vases honoring ikebana, the Japanese art of flower arranging. While he admits he is not a “master ikebana-er,” he has spent years creating seashell-esque forms for others to use in their creative floral endeavors.

Luberger’s ikebana vases are thrown on the potter’s wheel and crafted into a cylinder shape. He then cuts a large section out of a side and begins hand-sculpting the porcelain to creating crimped and flowing edges. Some are given a second layer to create more spaces in which to tuck buds, and others have wall hangers installed. The works are then fired, glazed and fired again before Luberger puts them on display in the gallery, accompanied by the freshest flower heads from the Plum Bottom Pottery garden. They are now the most popular pottery Luberger creates.

As Luberger prepares for another springtime selling ikebana vases at Plum Bottom Pottery, I caught up with him to talk about this traditional Japanese art form. The gallery will host Art Show 3: Think Spring Ikebana show from 10 am until 4 pm on Saturday, April 14. 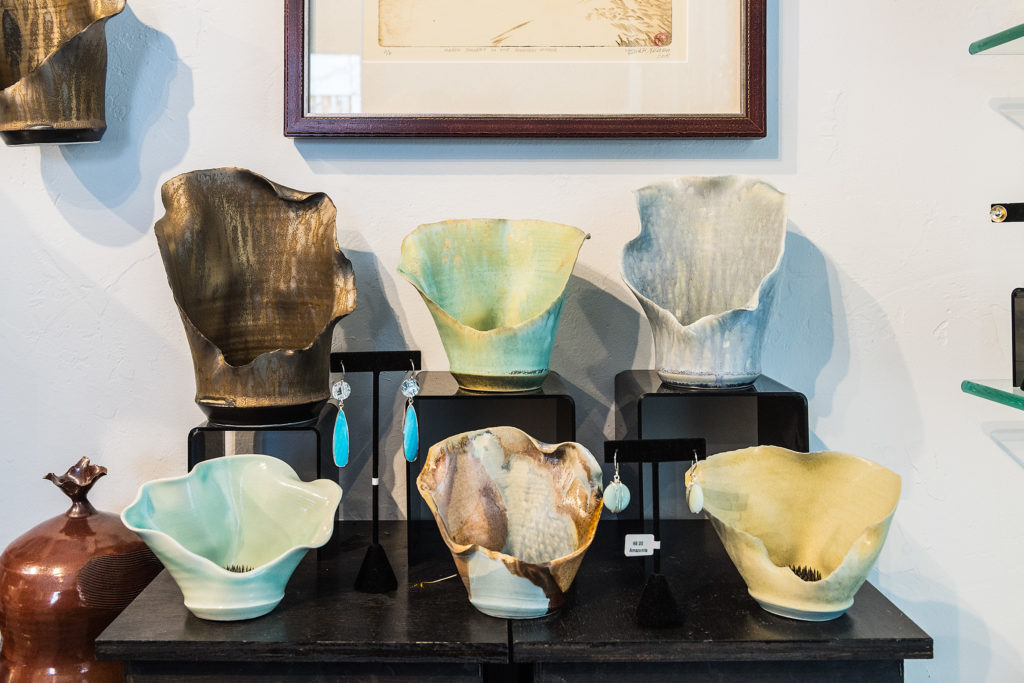 Alyssa Skiba (AS):  What inspired you to begin creating ikebana vases?

Chad Luberger (CL):  I probably started them six years ago and it actually was a bit of an accident that I started making them. I do a lot of sculptural random pieces and I had these pieces that weren’t really vases and they weren’t really sculptures and I was like, ‘What do I do with these?’ and I thought, I’ll put a pin frog in them and they ended up selling pretty quickly and I just kept making them and varying them to a certain degree. It’s become something I really love making now because they’re really sculptural, it really shows the fluidity of the clay that I like to show off, but it really showcases flowers quite beautifully.

AS:  What form does ikebana traditionally take in Western society?

CL:  The typical ikebana is three stems and that symbolizes something tall symbolizing the heavens, something very short symbolizing the earth, and then something in the middle that is man and our balance within that. It gets way more complicated than that.

AS:  What are some of your favorite arrangements to display in your ikebana vases?

CL:  What we’ll do in the spring, we’ll take a long cherry blossom branch that’s two feet tall and put it in there and you can just play. That’s the thing. It’s so simple. What I like about it is you can put a single hosta leaf in and you appreciate the hosta leaf…We’ll have a big daylily in there and it’ll look fantastic or I’ll put a hosta leaf in the background and just one single daisy coming up with the hosta leaf and it can be quite beautiful. But ikebana can go beyond just beauty; it can really make statements…Sometimes people will leave a blossom that’s brand new and flowering right next to a blossom that’s on its way out and that can kind of symbolize the life and death that we all kind of go through. 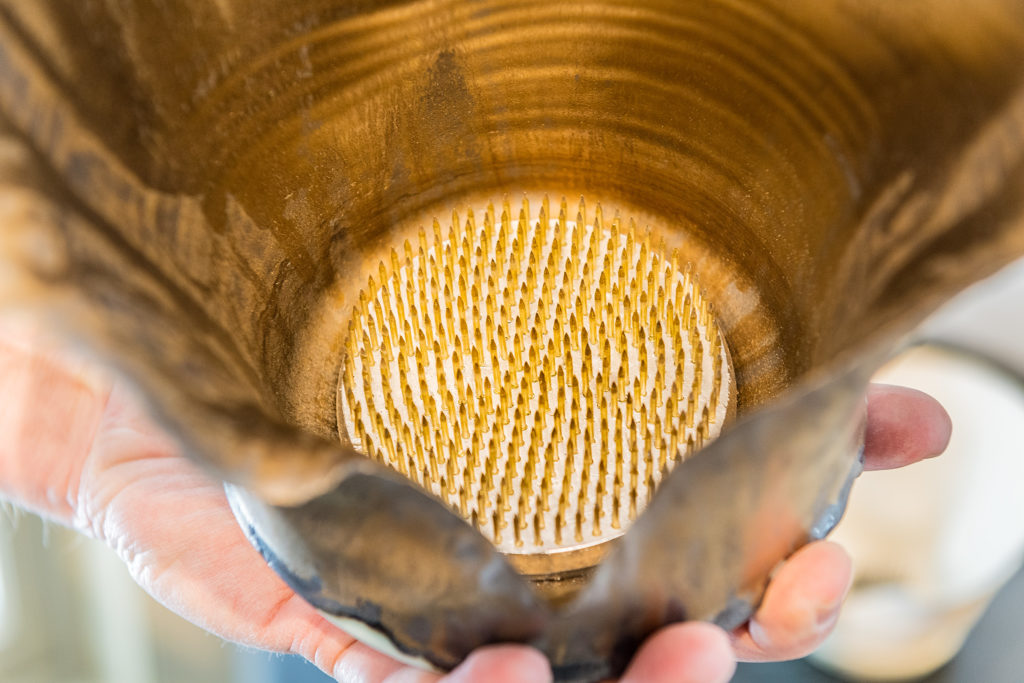 Pin frogs in the bottom of the vases ensure a long-lasting flower. Photo by Len Villano.

AS:  How does ikebana change a viewer’s perspective on flowers?

CL:  It’s really interesting how the flowers look and how you can appreciate them rather than having to get a big bouquet of flowers together and put them in a vase and then really that bouquet is kind of the statement where you’re looking at everything as one whole. Putting a single stem or putting three stems, you can appreciate the flower in a whole new way.

AS:  Why do you enjoy working in this form?

CL:  It’s such a loose form. It can go anywhere. It can evolve and change and I think that’s the way things happen with potters. You kind of work in a series and slowly you start to hone in on something. I’ve made these really tall. I’ve started to like these a little wider compared to something that’s a little more vertical. Just little things like that.

AS:  How do you engineer your pieces for the flowers?

CL:  I put a pin frog in the bottom of these pieces so you can stick stems on it and they will stay, so that’s one way you can get really tall things to sit where you want them. What’s nice about the pins is they go up the stem and they keep flowers fresh for an incredibly long amount of time, especially if they’re fresh flowers we can keep them for three weeks. 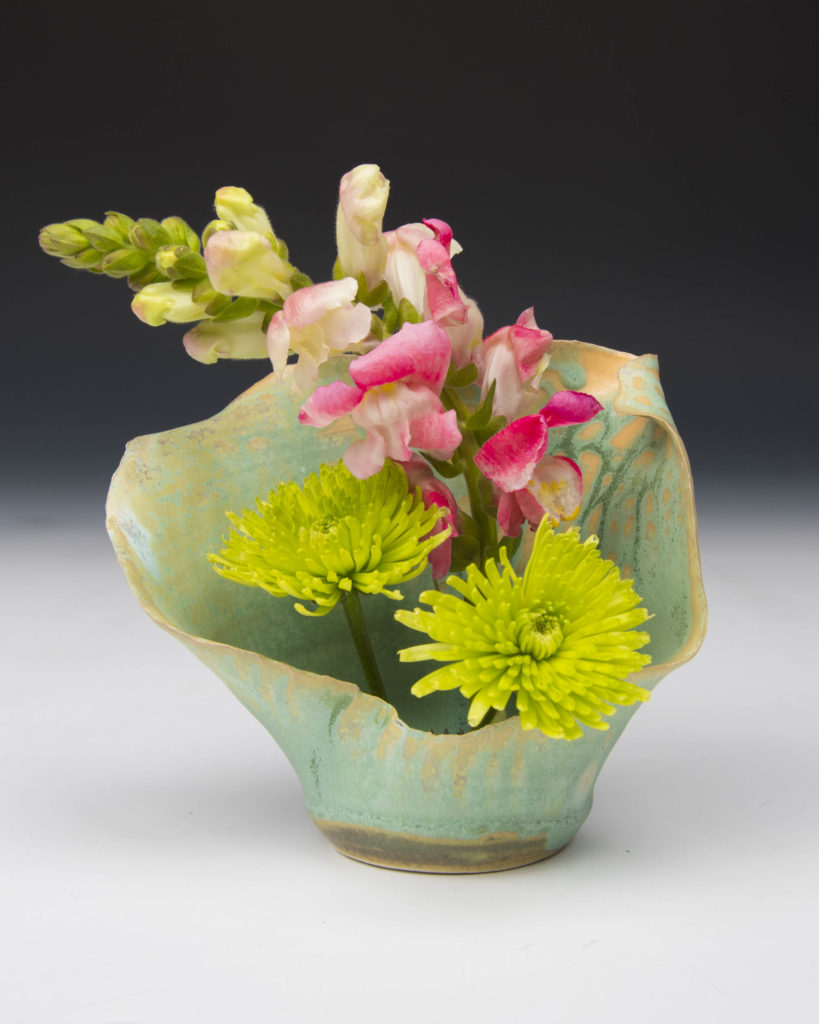 AS:  What kind of glaze do you use on your vases?

CL:  All different sorts. I have 50 different glazes so I use everything from blacks to I have a Door County ash glaze where I use ashes from trees on the property here in the glaze and they melt out into these soft kind of gray-blue rivulets. It’s kind of a little bit of Door County right in the glaze, which is kind of neat.

AS:  How might your work be viewed in regard to traditional ikebana?