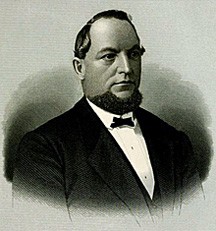 Valentin Blatz might want to get Blatzed if he knew what had become of the Milwaukee-brewed beer that still carries his name.

I once wrote a beer column that joked about Blatz being an onomatopoeic beer, which means the word suggests the sound associated with the object. I left the meaning up to whomever was interpreting. It could mean something along the lines that you bet Blatzed on Blatz, or it could have meant the sound of gastric disorders bought on by drinking Blatz.

However, it was all in fun. I never meant to imply that Blatz was any worse or better than any other cheap American lager.

During a recent visit to Washington Island, my companion and I were traveling by bicycle, so we kept it light by not bringing beer with us. We decided to buy it on the island.

After stopping at a bar with off-sale, we listened as the owner recited a few megabrews he had available before he stopped to tell us about the union meetings he attends where there are only two rules: If an argument starts, the conversation has to be changed immediately, and everyone brings cheap beer. He said he brings Blatz.

“Get it cold enough and it will go down,” I thought.

But, alas, that was not the case. Even ice cold, Blatz is a disgusting excuse for beer. It tastes as though a small teabag of malt and hops was dangled in a bucket of brackish water for a few moments. I could not finish a can. 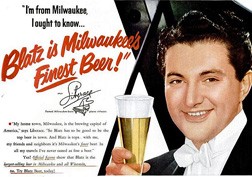 In the early 1950s, Blatz enlisted a number of celebrities for a magazine ad campaign, including hometown boy Liberace, who seems an unlikely beer drinker.

I went to the Blatz website and learned that “Blatz beer is everything Val Blatz himself was – bold, determined, innovative, and new to the country. Blatz still retains its heritage of fine American beer made with German craftsmanship. Brewed with the finest six row barley our country can grow, Blatz marries old world Gumeiklekeit [I believe the marketing genius who wrote this means ‘Gemütlichkeit’] with new world creativity. Next time the barkeep asks what brand you want, ask for Milwaukee’s Finest Beer – Blatz!”

Poor old Valentin Blatz has to be rolling in his grave over that hyperbolic description of the anemic liquid now sold under his name.

Blatz and many other old-school beer brands such as Old Milwaukee, Old Style, Schlitz, Lone Star, Colt 45 are all owned by virtual brewery Pabst Brewing Company. All of its beers, including Pabst Blue Ribbon, are contract brewed at Miller Brewing facilities around the country.

Nothing wrong that, but it’s painful to see how this once proud Milwaukee brew has become a pale imitation of “fine American beer made with German craftsmanship.”