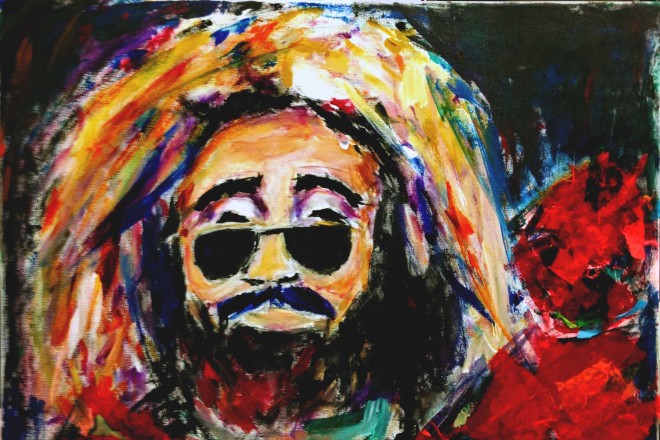 From an early age, Ryan Mueller has been captivated by the things that grab the attention of most boys: werewolves, monsters and dinosaurs. He remembers the first time he saw The Wolf Man at the age of five, marveling in the transformation from human to hairy beast.

But that’s where Mueller stopped being like most boys. When he rented monster movies, he fast-forwarded through the story to get to what captured his attention most – the artistic process behind creating imaginary creatures. 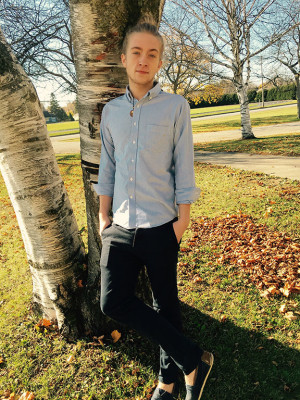 “When I was a kid, I would rent monster movies and I would not watch the movie; I would watch the special effects features on how they made the monsters because I wanted to do that,” Mueller recalled. “… It struck a chord and it’s still been ringing to this day, and you can see where I take that imaginative transforming into my artwork.”

Since last summer, the Sturgeon Bay High School senior has undergone his own transformation, taking art from a graded requirement to a career focus. This fall, he will start his art foundations year at Milwaukee Institute of Art and Design, where he recently earned a $56,000 merit scholarship.

“I got really serious about it this past school year,” Mueller said. “There was kind of a lull in my interest in art for my first couple years of high school. I was still in art classes but me personally, I don’t think I was creating anything that spectacular but all the sudden something clicked my senior year and I just kept creating and creating and creating and then all of these things happened with it.”

Those “things” Mueller referred to are his acceptance of the Leonardo DaVinci Award for Most Inventive through the Wisconsin Art Education Association (WEAE) Northeastern Wisconsin Regional Art Show and more recently, his first place award at the Norman Miller Photography and Graphic Design Competition, sponsored by St. Norbert College and Press-Gazette Media.

These awards represent more than success in art – they represent the variety that Mueller has exhibited in his work. The Most Inventive Award was given for his pen and ink surrealism piece of human anatomy while the Norman Miller award was for his mono-print series and writing on social inequality.

Both of those projects were the result of his third year of work in AP Art. Every two weeks, Sturgeon Bay High School art teacher Nicole Herbst assigns the AP class a theme that they can pursue using any media they choose.

His “Social Inequality” piece was originally part of the “Dismal” theme Herbst assigned the class earlier this school year. The mono-print series is textured with oil pastels, chalk pastels and paints and resulted in dozens of pieces. When Herbst shared the competition information with Mueller, he narrowed his focus down to the pieces that best spoke to his chosen theme of the contest, social inequality. From there, he created another series that focused on that theme.

“I’m kind of noted for having this unconventional, backwards way of working,” Mueller said. “I dive into my medium, experiment with it and as I’m working, I find my inspiration of what I can make it into.”

The result was a three-piece “washy, confused” contrast of color and black and white that best represents social inequality in Mueller’s mind – conditions that “tear the social fabric, undermine social cohesion and prevent nations, communities and individuals from flourishing,” as he wrote in the description portion of his entry. 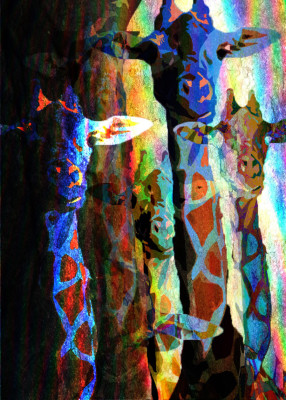 “Becca the Beloved” by Ryan Mueller.

“The black kind of reminds me of thoughts colliding in your head and not trying to feel right within a crowd and having your back turned on people,” Mueller said.

In a way, his “Social Inequality” piece represents not only his theory on art and humanity but his willingness and drive to keep pushing the boundaries of his own comfort zone.

“This year showed me that you can’t really think about what might drag you down, you have to keep on going,” Mueller said. “That gave me a lot of inspiration to take a chance and go for it because this is what I love to do.

“I always find myself having to search rather than having found myself somewhere,” he added. “It’s all about trying to do the next thing.”

In that way, Mueller is already doing what his artist teacher has inspired in him – that “True artists are always searching humbly; their success is built on knowing there is always something more to learn and we can’t assume we have all the answers; we have to continuously look beyond the obvious.”

“I think through Ryan’s hard work and constant searching, he is finding that he is creating meaning for not only himself but making an impact on others,” Herbst said. “I think it’s going to be a big influence on where his art is headed.”