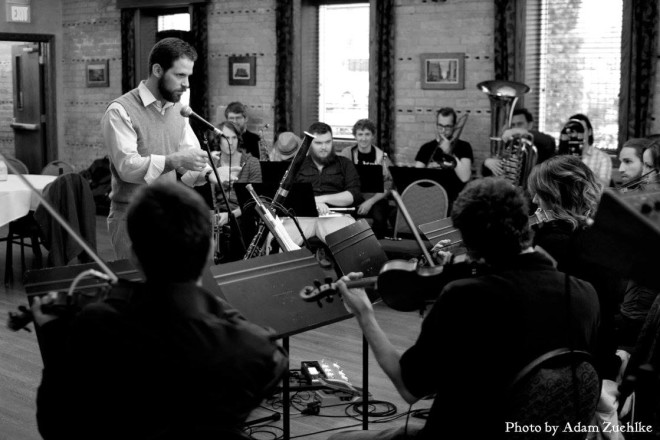 When Adam Conrad assumes his position in front of his orchestra Oct. 9 at Door County Brewing Co., he will do so without the signature conductor tools – a baton and music stand, or sheet music for that matter. In fact, when he raises his arms before the band, he will be as unsure of what’s to come as the audience will be.

It’s the name of the game for the aptly named Improvestra, a Twin Cities-based improvised orchestra that can include anywhere from eight to 45 players all under the direction of Conrad’s improvised conducting hand signals.

“We don’t have any music,” Conrad explained. “I use somewhere in the vicinity of 40 hand signals to guide a full-scale improvisation and make it as composition friendly as possible.”

It began with an assignment from a professor at Conrad’s alma mater, McNally Smith College of Music, where he was asked to organize a large-scale musical improvisation group. He began researching the late Butch Morris, an American jazz cornetist, composer and originator of Conduction, a structured free improv that Morris described as providing “immediate possibilities to alter or initiate harmony.”

“He lived in New York in the ‘70s but he did sort of free form jazz improvisation so the gestures sort of meant an idea of something rather than something very specific,” Conrad said. “…I figured out some of his hand gestures … then made up some of my own, got about 20 guys together, and we’ve been gigging monthly since. That was five years ago.” 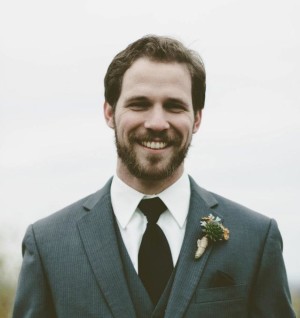 Since then, Improvestra has grown to include a bank of about 200 musicians who have played with the group at one point or another. Among some of the more unusual instruments to appear are the washtub bass, melodica (otherwise known as the blow-organ or key-flute), harmonium, Hammond B-3 Organ, synthesizers, electric bassoon, electric flute, cajón, djembe, contrabassoon, lute and the occasional beat-boxer.

There is just one important characteristic of playing with the group.

“It’s really just about feeling like your instrument is part of you rather than an instrument that you’re playing,” he explained. “It just becomes an extension of your brain and the closer you are to that, the better you work with Improvestra.”

So how does it all work?

“It usually starts by just inviting one person to play,” he said. “And when the first person starts playing, then I’ll start creating textures behind them with the other musicians or I’ll take an idea of what they did and give it to another musician to repeat, and kind of play with it like Play-Doh – lengthen it, shorten it, chop it up, do different techniques with the idea or the riff.

“The beautiful part is that I don’t know what we’re going to create until I’m standing in front of everyone,” Conrad continued. “And sometimes I’m standing there in front of the orchestra and they’re all looking at me, and I look at the bass player and he’s rip roaring ready to go. You can see it in his eyes. He’s nodding at you like, ‘Dude, I got it.’ Guys do that all the time; they look at me, put their finger in the air, and they’re like, ‘I got something.’ And you give it to them and see what they come up with. Whenever a guy does that, it’s always hot … they’re not just trying to play to play, they know when they’re feeling it.”

That intuition ultimately guides the entire performance, leading them in the direction of funk or reggae, cinematic or classical, and everything in between. Songs can range from five minutes to 30, if only because Conrad’s grasp on improv conducting helps him sneak in transitions that even leave him questioning whether to count each segment as its own song or just one long one.

He credits his grandfather, the late Allyn Ferguson (a legendary film composer/conductor responsible for such themes as Barney Miller and Charlie’s Angels) for teaching him harmony, orchestration and conducting, and helping music become “pretty easily a second language” for Conrad – a language he continues to experiment with in Improvestra.

Improvestra will perform from 7 – 9pm on Friday, Oct. 9 at Door County Brewing Co., 2434 County Road F in Baileys Harbor. For more information on the group, find them on Facebook.com/improvestra.