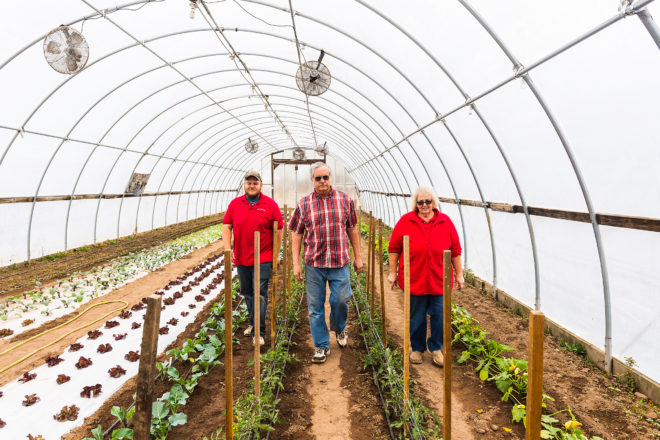 Before most people have had the chance to wipe sleep from their eyes on a Saturday morning in the summer, Char, Michael and Steve Sullivan are already several hours into their weekly Sturgeon Bay Farmers Market routine.

By the time locals and tourists begin strolling the market at 8:30 am, the Sullivans have already packed three extension vans full of freshly picked produce, delivered it to their two rented spaces (the equivalent of four parking spots) at Market Square, and spent an hour unpacking it in boxes and crates carefully arranged and priced on several tables spanning their designated space.

For the next four hours, they greet every person who stops by the Sully’s Produce stand. For anyone who has been to any of the county’s weekly farmers markets, it’s a familiar name. Sully’s Produce is among the largest suppliers, quantity wise, of produce at every one of the five weekly markets in Door County that it serves.

“When I go to Jacksonport, Fish Creek or Baileys Harbor, I bring more produce than all of the other produce farmers combined,” Michael Sullivan said.

During peak harvest season – July and August – seven people work the Sully’s Produce tent, trading fresh fruits and veggies for the dollars that have allowed this small Sturgeon Bay farm to not only stay afloat the past 35 years, but to grow and thrive. From their initial half-acre of produce to today’s nearly 40 acres (plus seven greenhouses and a roadside self-serve shop), the Sullivans are among a growing contingent of farmers proving that small can be successful.

“If we didn’t go to the farmers markets, we’d probably sell 45 percent less than we are now,” Steve Sullivan said. “We sell as much up here [at the roadside stand] as we do at all the farm markets. We’re about 20 percent wholesale and 80 percent retail.”

It’s been a dedicated effort on the Sullivans’ part to make those numbers a reality. Selling at a farmers market is more than just setting up a table and laying out produce on market day. It’s using your hands (starting tomatoes in the greenhouse in January, building more greenhouses, and growing and harvesting the produce), your mind (attending produce conferences and field days), and your business sense (developing a strategy for reasonable growth and securing and paying employees).

It’s doing what they do at the Sturgeon Bay Farmers Market four other times at four other locations every week, from May until October. It’s knowing your customers tastes and habits.

“Even if I’ve only got four or five people who want this one yellow bean, I have to bring those because the customer has a strategy,” Michael Sullivan said. “They know I have my yellow beans, they want them every week and now they’re at my table and I have everything else you could possibly grow that’s in season. They’re going to buy that stuff from there already because they’re standing right in front of me.”

Despite the costs associated with selling at the market – renting spaces, paying employees and fueling up – the Sullivans know customer service and quality control reign supreme, even above the almighty dollar.

“You can’t be afraid to throw it out. That’s what it comes down to,” Char said. “It’s amazing because things are inspected and touched more than once…sometimes there might be a tomato that has a soft spot. It slips through. If you see that it’s not good, you get it out of there. You don’t say, oh, maybe someone will buy it, or you don’t say, oh this one is half price. You don’t want to do that.”

The Sullivans supplement their farmers market sales with a seasonal self-serve shed at the end of their driveway and through wholesale to several Door County grocery stores and restaurants. That trifecta has become an increasingly popular business model for local small farms. 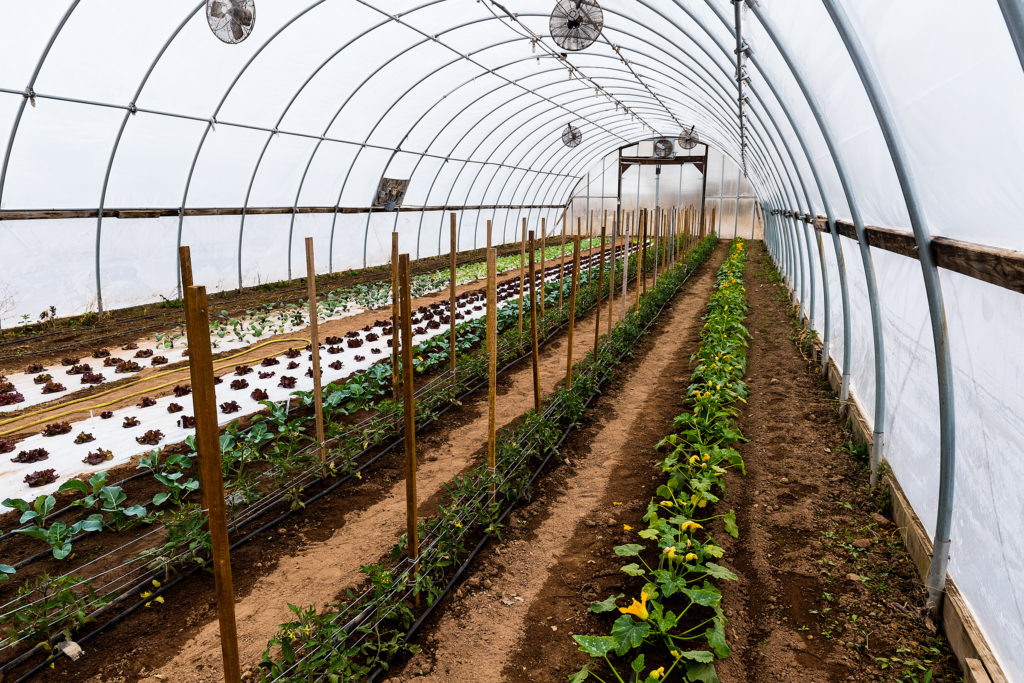 The increasing business support of local farmers in recent years is helping Door County build a reputation as a farm-to-restaurant destination. Peninsula chefs and restaurateurs are increasingly seeking out local farms to supply seasonal produce. Those who list these suppliers on their menu and website play an important role in introducing established and new small farms to consumers.

JR Schoenfeld, who owns Chives and Barringer’s, buys from between 10 and 15 local producers each month depending on the season. That variety allows for an ever-evolving menu at Chives.

“One of the coolest things about using local is it gives you the challenge and the creativity of seasonality,” Schoenfeld said. “A restaurant that is fun and exciting and fun to work in is one that you change regularly. But sometimes you get stuck in a rut so following the seasons, following the local produce gets you excited to look forward to a season, whether it’s ramps or wild mushrooms. It gives you change and evolution.”

Benjamin Blohoweak and Sarah McCarty, of Cold Climate Farms in Little Sturgeon, are among the relatively new small, local farms connecting with customers through farmers markets and local eateries. They are also among the young farmers experiencing firsthand the financial aspects that make starting a farm difficult, if not impossible, for most.

Prior to moving to Door County in 2014, Blohoweak and McCarty were involved in the local food movement in Madison. What began as plans to return to Blohoweak’s Green Bay roots and start a farm there quickly turned to life in Door County when Blohoweak’s uncle sold him a blank piece of property in Little Sturgeon on a land contract.

Blohoweak acknowledges the land contract played a major role in his ability to get the farm started, along with a Farm Service Agency startup loan, and noted other difficulties that prevent other young people from attempting life in farming.

“A lot of people, all those things don’t line up well and I think it’s hard for someone to get their foot in the door and a lot of people want out or their children don’t want to do that,” Blohoweak said. “They want to move to the city, they want suburban life, so how do you get people that want to do it access to all the machinery that you need?

“There’s just such a disparity between different generations’ expectations of what that land is worth and in what format people will be paying for it,” he added. “And then just becoming part of a community. How do you just jump into that area? For a year we didn’t meet anyone.”

The early years have proven to be that important mix of hands, mind and business sense. Cold Climate Farms will add a third farmers market to their season this year and the duo have already developed a longe-range business forecast that includes orcharding (they have grafted and planted 250 apple trees for future cider production), grazing, market gardening and possibly agritourism “to showcase what you can do with sustainably in our eco-region.”

Bring Folks to the Farm(er)

Agritourism – bringing visitors to the farming operation – has been growing in the United States since the turn of this century. It’s one of, if not the only way to bring the consumer to the farmer. Ron Schweigert, of Flying Tractor Farm in Sevastopol, welcomes classrooms of area children to his operation every spring to meet the farm animals and learn more about farm life.

Schweigert is a relative newcomer to the agriculture world. He is a retired mortgage banker who spent the first four years of life on his parents’ farm before his father’s injury led them to sell it. From then on, his parents spoke fondly of their days on the farm and inspired Schweigert’s desire to return to his agricultural roots.

It was a long time coming but in 2013, after earning a certificate in Sustainable Agriculture from Northeast Wisconsin Technical College, Schweigert purchased his property in Sevastopol – a 20-acre property with ramshackle buildings. He has spent the past few years simultaneously rehabbing those old buildings and establishing his produce and meat farm.

Like the others, his consumer outreach involves selling at three local farmers markets along with area restaurants and grocery stores. He is also part of a Green Bay co-op of small, local and sustainable farms.

While he invites people to stop by and ask for a tour of the farm, he also has visions of rehabbing the remaining dilapidated buildings – he has his sights set on an old silo – and incorporating agritourism into his business.

Maybe then, he muses, people will understand why their support of local farms is so crucial to the agricultural heritage and landscape of the Door Peninsula.

“This is part of Americana that will never return,” Schweigert said. “And if people like the feeling that they get from them, like I did when I saw this, they need to solicit those businesses. They need to buy from those people…support your local farmer, know where your food is coming from, and then give them as much business as you possibly can.”