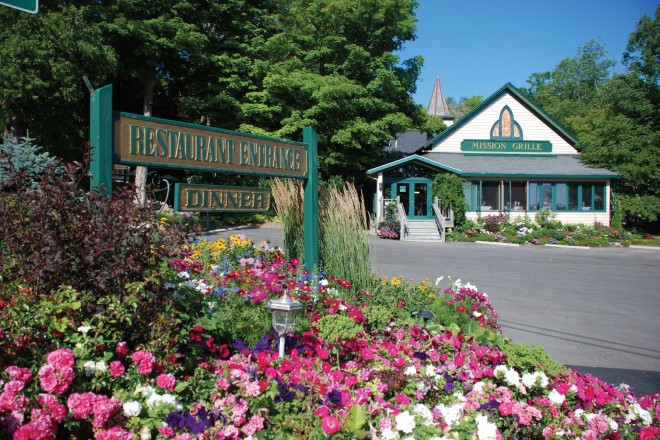 Fine dining can be intimidating. There is a perception that the wait staff will be snooty, the sommelier will talk down to you and the atmosphere will be stuffy. That is a misconception that the Mission Grille has successfully turned on its ear for the past 20 seasons. Diners are greeted with more than just the prospect of a meal; they are also welcomed by a sea of flowers, an outdoor waterfall, a building that is a living piece of Sister Bay history, and a seasoned staff that is in love with food and wine. By the time diners have made it to the hostess stand and are warmly welcomed, they realize there is nothing to be intimidated by. Gary and Mary Ann Guterman put their guests at ease so that they can focus on having an enjoyable dining experience.

The Mission Grille has been a big part of the Northern Door dining scene for two decades. The restaurant’s success is due to a skillful balance of consistency and reinvention. Diners are comforted by seeing the same faces in the staff year after year, yet look to see what will be new each season. For their 20th anniversary, the Gutermans have a couple of changes that are eagerly anticipated by their loyal patrons. There will be early dining specials nightly as well as several “Hard Times” selections for those feeling the pinch of the economy. In addition, the Mission Grille will be serving Sunday brunch from 9:30 until 2:00 which will include mimosas, Bloody Marys, an omelet station, a ham and prime rib carving table, Lyonaise potatoes, fresh fruit, and Belgian waffles. Guests will be able to enjoy brunch on the covered porch or the outdoor garden patio. Another new addition will be a wine bar in one of the private dining rooms which will serve wine flights, antipasti, appetizers and cheese, and will highlight various labels from the restaurant’s plentiful wine cellar. There are over 500 wines featured at the Mission from all over the world from countries such as Spain, Argentina, Austria, France and Germany as well as domestic selections from California.

Gary and Mary Ann are assisted in the running of their restaurant by their extended family, most particularly head chef Bryan Bradley and general managers Tonda Gagliardo and Karl Bradley. “Our staff is our most important asset. This is a people business and the treatment of our staff is paid forward by their service to our customers,” Gary explains. “Bryan is a joy to work with since he has such imagination. We give him free reign on the specials and we love to see what he comes up with. He’s somewhat of an atypical chef due to his easy going manner; his demeanor alone makes our kitchen a success.” Mary Ann nods in agreement and adds, “We are so fortunate to have Tonda and Karl as well. The professionalism and care that our patrons receive from the staff is really something. We consider our employees our extended family.” Karl and Tonda started at the Mission Grille in 1995 and worked their way up to management by learning every aspect of the business from helping in the kitchen, serving at the bar and waiting on tables. They became so ingrained with the restaurant that Karl and Tonda even held their wedding at the Mission in May of 1998. As they enter their 15th season, their attachment to the restaurant and its customers has only grown. Tonda remarks, “It feels like we are hosting a party every night.”

When Karl’s brother Bryan began at the restaurant in the fall of 1996 he, too, started on one of the lower rungs as a dishwasher. He gradually started helping out with the cooking under the tutelage of former CIA (Culinary Institute of America)-trained Chef Tom McGinn and eventually became head chef in 2004. In addition to the nearly 20 entrées on the regular menu, Chef Bryan also has three or four featured entrées each evening and also has two other special menus upon request:  one for vegetarians and another that is gluten free. When a patron makes a selection from any of the menus, it is clear how much thought and care has gone into their meal. Everything on the menu is made from scratch – from the soup course through the dessert course – using the best and freshest ingredients from all corners of the world:  Door County produce, Maryland blue crab, New Zealand lamb and wild salmon from Alaska.

All the efforts of the familial and expert staff appear to have paid off. The Mission Grille has been awarded the Wine Spectator “Best Of” Award of Excellence for nine years running, Wine Enthusiast Award of Unique Distinction, and North American Restaurant Association Award of Excellence. It has also been named one of Gourmet Magazine’s top 12 Wisconsin restaurants and, most recently, as part of the Best Small Town for Dining in Wisconsin.

The most important award, however, comes directly from the patrons. “There is no bigger compliment than for a customer to say to us ‘You are our favorite restaurant, period,’ especially when they are from larger metropolitan areas like Chicago or Minneapolis,” Gary relates. Those customers keep coming back for many reasons; some would say it is for the Maple Leaf duck with Door County cherry sauce, others would claim it is for the slow roasted Angus prime rib, while a great number more would say it is for the pistachio encrusted Alaskan halibut. Just as all of these customers would have a favorite place to sit – al fresco on the outdoor garden patio, tucked in an antique church pew in a cozy corner, or having the best of both worlds by sitting on the porch.

The Gutermans are really looking forward to celebrating their 20th year in business with long-time enthusiasts as well as those discovering the restaurant for the first time. From May to October the Mission Grille serves dinner nightly and from November to April they are open Friday through Sunday with the exception of March when they are closed. Diners looking to celebrate the holidays at the Mission will find them open on Thanksgiving, Christmas Eve and New Year’s Eve. For other special events, such as rehearsal dinners, anniversary parties and family reunions, private rooms are available. The Mission also caters parties and events outside of the restaurant.

Gary and Mary Ann expect that this season will fly by as quickly as the others have. Gary remarks, “It’s amazing how fast the time goes by. One minute it’s May 1st and then the next thing you know, it’s Fall Fest already.” Patrons probably have an opposite view of the matter. While they are dining at the Mission, they find that time stands still for a couple of hours as they savor an incredible meal, sip on a great glass of wine and soak up an atmosphere that is both relaxed and reverent.