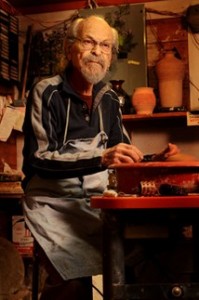 Abe Cohn, who passed away May 10 at the age of 88, was many things. He was a devoted husband and father, a man with a sly sense of humor, a good listener, a fisherman, and a mensch, just to name a few.

But at his core, Abe Cohn was a potter.

“When I think of him, I think of his passion for clay and how that always amazes and impresses me,” said Reneé Schwaller, owner of Off the Wheel Pottery in Fish Creek. “I look at how long he did it and how it was such an integral part of his life. He was such a potter, the quintessential potter.”

Reneé worked at the Potters Wheel, the Fish Creek studio Abe and his wife Ginka started in 1956, for a couple of summers in her youth. While there she discovered a passion for clay that sent her back to school and inspired her to eventually open her own gallery.

Abe made his mark on many (perhaps even most) of the county’s potters. If you were to call around to galleries throughout the county you’d not only hear stories about Abe, but you’d also be directed to a list of other people who worked with him at the Potters Wheel and could tell you even more stories.

“Abe was interesting because he never involved his ego in looking at other people’s work,” said John Dietrich of Ellison Bay Pottery, who apprenticed with Abe at the Potters Wheel from 1968 to 1974. “He could accept other people’s work as long as it was good. That’s kind of a special quality that not too many artists have.”

Dietrich said that when he approached Abe about being his assistant, he asked if Abe would like to look at his work. Abe said he did not and took Dietrich on blind, saying that it was desire and the ability to find your own artistic style that was most important.

“Three years later he said, ‘Well John, I think you’re going in the right direction,’” said Dietrich. “That was probably the best thing in the world for me.”

According to his daughter Tamar, Abe and Ginka were just as encouraging with their children, and the couple lived their own lives by the edict that they needed to follow their passions.

One of Abe’s passions, of course, was Ginka. Ginka, who passed away in 2011, was a former student of Abe’s and a dancer; they’d been married for 57 years. It’s rare that you can find a photo of the two of them together where Abe isn’t completely focused on Ginka, paying the camera absolutely no mind.

“Neither of them could’ve had the life they had together with anybody else,” said Tamar. “They admired each other’s talents, and they were so proud of each other. They were always a real solid love.”

In the wake of Ginka’s passing and his own health complications, Abe stepped away from the wheel for a bit. But with the help of his son Jonathan, he came back to pottery in the fall of 2011 and stayed with it up until a couple months ago.

“For last week’s Mug-O-Rama we fired 50 mugs for Abe,” said Dietrich. “He had a thoroughly good representation at the studio.”

“His whole identity was ‘I am a potter’,” said Tamar. “So it was just natural that he should be working. It probably felt good for him to be able to more fully be himself.”