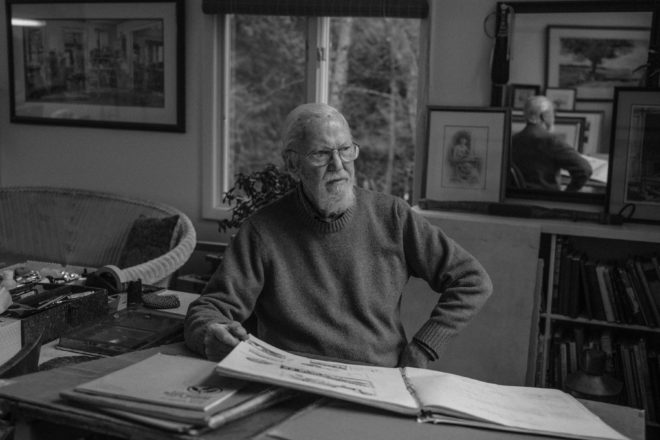 Mark Kauzlarich, a freelance photojournalist, documentary and portrait photographer based in New York City, took these photos. When giving us permission to use them, Kauzlarich said Chick Peterson “was very important to me, and I think this is the best way to honor him.”

April 5, 1927 – June 2, 2022
A complete obituary is available at doorcountypulse.com/obituary-charles-lloyd-peterson.

Peterson and Deborah Rosenthal, the museum’s curator at the time, spent more than a year selecting the pieces to be displayed.

“He had a clear understanding of what he wanted – a chronological review,” Rosenthal said. “He had started to save things very early in his life as an artist, and we talked about each item as he pulled them out of his files.”

The final item in the exhibition, at Chick’s request, was an in-progress piece he had aptly titled “Next.” The museum’s executive director, Elizabeth Meissner-Gigstead, saw that as an expression of Chick’s desire to continue to pursue what he so loved.

“It was an artistic career that was never complete,” she said. “Now, in his passing, it will live on through our educational work at the museum.”

Both Rosenthal and Meissner-Gigstead noted their appreciation for the decades that Chick served on the museum’s art-acquisitions committee, dating back to the 1970s.

“Because of his long history of teaching art at the college level, he had an extensive knowledge of art history,” Rosenthal said. “He was so articulate in talking about art and extremely valuable in reviewing pieces that had been offered to us as donations.”

Bonnie Hartmann, the museum’s executive director from 1992 to 2014, said that she and Chick often did presentations they called “dog-and-pony shows.”

“I was the dog,” she said with a laugh. “Chick was the pony that always stole the show. I am so blessed to have known this man who had such integrity, intelligence and talent.”

‘This Man Can Draw’

Chick – whom his mother called “my little chick” as the youngest of three sons – had an extraordinary ability to tell a story, not only in words, but also through his art. He gained national and international fame through his marine paintings.

When Sally Slattery Collins interviewed Chick for a piece in the Peninsula Pulse in 2014, one of the stories he told her was that Walter Cronkite, a passionate sailor (as Chick was) and appreciator of maritime art, looked at Chick’s work during an international competition at Mystic Seaport’s Maritime Gallery in Mystic, Connecticut, and said, “This man can draw!”

“I thought he had used his power of observation and his power of communication to summarize my whole career in four words,” Chick said.

Although his fame may be based in large part in that genre, including his much-loved work called “Sabbath at Sea,” it’s the 60 paintings in the Memory Collection, completed between 1989 and 2004, that have “spoken” to thousands of people.

The Dec. 29, 2020, issue of Beautiful Life magazine said that “in creating them, Peterson used a combination of a bright and clear background with faded human ghost-like figures from the past – people who may already be dead, but who will always live in our memories and hearts.”

A Modest Man, a Great Man

Without exception, everyone who was interviewed for this story emphasized that Chick was a modest man, never seeking to be famous – a perfectionist without being impressed with himself.

Mark Quale, CEO of White Door Publishing Company in Minnesota, was Chick’s agent for 20 years and the publisher of two of his books.

“I met Chick and Sue [Chick’s wife of 64 years, Susan (Gilson) Peterson] in the late ’80s,” Quale said. “Chick was hoping to slow down a bit and close their home gallery. I convinced them that working with me to sell his works nationally rather than locally would help them do that. Not only did prints of the Memory paintings put Chick on the top-10 best-selling list for the next several years, but the prices of his originals soared.

“We had a close relationship – more than business partners. I’ve had many great friends, but I’ve known just one great man.”

Hartmann recalled that when Chick learned in 2004 that Quale wanted to arrange an exhibit of the Memory Collection at the Miller Art Museum and a celebratory dinner at Stone Harbor, she recalled he told her, “‘I don’t know who’d come to a dinner for me. I guess Sue and me, you and Mark, and maybe a couple of others.’ He was spellbound when more than 300 people appeared at both events.”

Chick touched and reached people through his art and personality in ways that were deeply personal.

“When I look at the Memory paintings, I think, ‘That’s my story he’s telling,’” said Rev. Frank Kauzlarich, pastor of St. Paul Lutheran Church in Juddville and a close friend of Chick for 25 years.

It’s a feeling experienced by many, but it’s actually true for the Kauzlarich family, including Mark, who is Frank’s son. The Ephraim house pictured in “Family Reunion” belonged to Carl Nelson, an ancestor of Frank’s wife, Anne.

Some paintings were created with a special recipient in mind. Joan Fitzpatrick, with her husband, Walt Fisher, was the longtime owner of the French Country Inn in Ephraim. Her joy was maintaining the lovely flower beds on the grounds, usually with their dog, Bouvoulina, beside her. After Bouvoulina’s death, Walt asked Chick to create a Memory painting of Joan and Bouvoulina as a surprise for Joan. That painting of Joan in the front yard, with a faint image of Bouvoulina resting near her, is, she said, “the dearest gift in my life.”

For Kauzlarich, whose father died when Kauzlarich was 12, Chick superimposed an image of his father over a mine sweeper, like the one on which he’d served in three wars.

Like others, Mark Kauzlarich – who is a photojournalist based in New York City – described Chick as an observer of the world and its people, places and events.

“His walks through Ephraim every afternoon led to ideas for many of his paintings,” Kauzlarich said.

Collins reported that Chick listened to classical music on NPR as he painted, but he turned it off at 3 pm each day and went for a restorative walk, making him a familiar figure in his old hat, heading for the Ephraim dock.

Kauzlarich met Mr. Peterson – “I didn’t call him Chick until much later,” he said – at an exhibit of his work at Jack Anderson’s gallery. “There’s not much I can say to explain what this man has meant to me through the years,” Kauzlarich said. “He was a mentor and a kind of grandpa. Outside of my family, I can think of few other people who have had as outsized of an impact on my life as he has. But more importantly to me, with 62 years between us, he has continued to be one of my greatest supports as an artist – a sounding board for my artistic struggles.

“Chick summed up his success to luck, the right people finding him at the right moment. In my view, I just see brilliance. But today as we said goodbye, we agreed that all we are is a constant attempt to emulate those we admire, and in failing to, we live in hope that we become closer to who we are meant to be.”

Chick first exhibited his work in the gallery in his home, and during the 1990s, he also began to show his work at Jack Anderson’s gallery in Sister Bay. When it closed in 2008, Chick moved his work to Anne and Myron Rogers’ Cottage Row Gallery at Lautenbach’s Orchard Country Winery & Market.

“There are no words to express how fortunate Myron and I have been to know and work with Mr. Peterson,” Anne said. “Chick was not just a fantastic artist, but a truly wonderful, kind, good person. His artwork has and will continue to bring so much pleasure to so many people. He will be greatly missed.”

The Rev. Phil Sweet, former pastor of Hope United Church of Christ in Sturgeon Bay, met Chick by accident in 1973, when he took a shortcut that took him by Chick’s gallery.

“I’d have bought everything on his walls if I could have,” Sweet said. “As it was, I bought one painting and faithfully made every monthly payment on time until I owned it. After that, I often brought a bag lunch so I could sit and talk with him. Some people become what they are bound to be.”

Conversation around the Easel

Learn more about Chick Peterson’s work on Thursday, July 14, 10:30 am, at the Miller Art Museum’s new satellite education space, M3, at 142 S. 3rd Ave. in Sturgeon Bay. The free Conversation around the Easel program invites visitors to focus in new ways on a small, select grouping of the artist’s paintings from the museum’s permanent collection and to engage in conversation about them.