My brother Bill introduced me to Chris Aaron about 20 years ago after dragging me to one of his gigs at what used to be The Rock. It’s now Alexander’s. Chris seemed like a kid to me, but he played like an old soul.

After the show, we stood outside, meeting for the first time, and he wanted to know if I had any advice about his playing. I was surprised he’d ask that of me – his lead playing was way beyond anything I could do on the guitar – but he seemed very sincere, not just trying to flatter me, so I just told him what I thought. I just said, “Play more weird notes.” 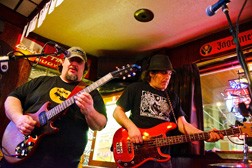 A few years later, Chris helped me at a time when I didn’t even know I needed help. I’d recently come back from living in Spain and there was nothing really happening for me here. And I didn’t really care about my “career” at that point. All I wanted to do was write songs and record. And play only when I felt like it, without much forethought. Nice work if you can get it, huh? And totally unrealistic. I really needed to be playing as much as possible – paying gigs – to make a living and to keep in good shape as a musician.

Chris was playing mostly solo bar gigs at the time, but he was playing all the time. And he kinda came to my rescue. He started booking double bills for him and me where we’d split the night. And through that, we started jamming together and it grew into playing regularly as a duo, playing lots of gigs – all booked by him – and it got to where I didn’t really want to play gigs without him. He added so much to the songs without overplaying and it all flowed so easily. I loved playing with Chris.

I don’t know why we stopped playing so much together. I think melaniejane had a little somethin’ to do with it. And he was always moving, it seemed. And that’s just the way life is – things change. Whether we want them to or not.

But we were still co-workers and co-dreamers, whether close together or far away. Steel Bridge and the Holiday Motel wouldn’t be the same – maybe wouldn’t even exist – without his contributions and his unwavering commitment. As a musician, a volunteer, an engineer, a cheerleader, his enthusiasm was infinite and contagious, and it roped in more people than anyone knows – good, key people like Steve Hamilton, Tony Menzer, Steve Smith, Ruby James, Steven Cooper, Billy Triplett, to name a handful.

Less than half an hour before he died (on Oct. 15, 2014), he called and asked me to write a few words about him. He was in his studio, working on his website, wanting a few good quotes to help promote a retrospective CD release he was planning. He was all charged up and feeling good about taking the reins of his career, learning how to build a website after all these years. “I should have learned this stuff a long time ago,” he said, more excited than regretful.

Chris wasn’t a self-promoter at heart. He just loved the music – and it didn’t matter whether it was his or someone else’s. If you were his friend, he was your greatest fan. Self-promotion was only a necessary evil, way down on the totem pole. Music and love – which were the exact same thing to him – always came first. Music, family, and friendship trumped his ego every time. This, as any musician knows, is career suicide in show biz. 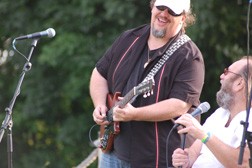 What could I say to my dear friend who had somehow managed to avoid the pitfalls of occupational narcissism all those years? Someone who had finally come to the point of realizing that a little good old self-promotion isn’t a vain ego trip – it’s a survival skill. That it could in fact benefit all those things (or that one thing) that trumped his ego: his family, his friendships, and his music.

“I should have learned this stuff a long time ago,” I still hear him say.

And what was my ridiculous response?

I suppose it really wasn’t too late – at least not too late to give him some good energy and a renewed sense of purpose in his final days, if not the career boost that was too long overdue.

But he wasn’t asking me for a response to the question of whether he should have been a better self-promoter earlier on. He was asking for a few words to help other people get more interested in his music. He was calling upon his friends (I wasn’t the only one – he had a whole list), asking us to come forward and endorse him publicly. Something I wish we’d all done more of, earlier.

Last time he was here in Sturgeon Bay, there wasn’t much time to talk. We’d only exchanged a few words, something about how our love and loyalty to one another can’t be damaged by space and time – a typical conversation with Chris. Now, talking on the phone, I was happy that he was giving me the opportunity to help him in some small way, something simple I could do. Just write a few words.

I asked him to send me the promotional tracks he said he was going to be putting on the website. “Not that I need to hear them to think of something good to say,” I said, “I just selfishly want to hear them and enjoy them.” He said he’d send them right away, and he did. (This was all happening during his last half hour on earth.)

I don’t often take time during the daytime to sit and just listen to music, but that day, I dropped everything and listened to all three tracks he sent from beginning to end. They were from his days with American Standard. He wasn’t singing on them; Cory, the lead singer, was. Chris was just playing, but the songs were all Chris Aaron classics that had been burnt into my soul from hearing him perform them over the years. I was amazed at how nicely they were mixed, how clear and sweet his guitar sounded, how mature his playing was, even way back then.

I immediately wrote him an email with a couple comments – “great tunes… my favorite is…” stuff like that. And I thanked him for sending the tracks. And finally I asked him, “When do you need my glowing endorsement?” I clicked send at 4:56 pm.

Little did I know, by then he was already down on the floor, not breathing. And I was oblivious, waiting for an answer to my email.

“When do you need my glowing endorsement?” If he could have answered that question, he might have said, jokingly of course, “Well, yesterday would have been nice.”

And here it is, just a few days later, and I’ve seen literally hundreds of glowing endorsements coming in from everywhere. He asked for it, but there’s no way he could have predicted the amount he’d get.

Sure, people say lots of nice things about people after they die, but…this massive outpouring of love, for its sheer magnitude, is not normal. Chris was not a normal man. In retrospect, we all can see that he lived life like legends live life. He was a pure spirit walking on this earth. And death can’t dim a light like that. Death only makes it glow brighter.

So please, let’s all continue to write our glowing words, to share his light, his music, and make damn sure it can never be forgotten. Chris deserves to be a legend. Let’s make him one.