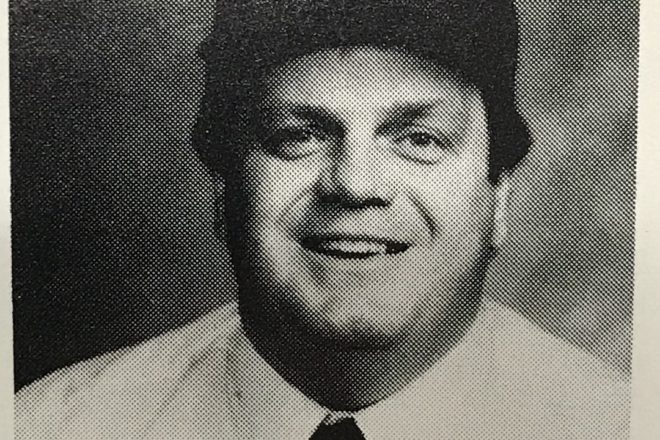 Former Southern Door teacher and football coach Rich Fahey brought intensity to his teaching, both on the football field and in the classroom. Photo courtesy of Southern Door High School.

Mallien, a senior offensive lineman for the Eagles in 1986, said Fahey, the offensive line coach, was running the linemen through a drill demonstrating the correct way to pull. Mallien and his teammates chose this drill to demonstrate instead an apathetic effort, and Fahey took notice.

Ever the teacher, Fahey asked one of Mallien’s fellow lineman to grab the tackling dummy and hold it while Fahey demonstrated how to pull with the proper technique. He quickly provided a lesson for his observers: Never give less than your best effort.

“I don’t think [the lineman] took [Fahey] too seriously, and he wasn’t holding the dummy very hard,” said Mallien, who is Southern Door’s athletic director. “Coach Fahey pulled, and he just blew him up. He went one way, and the dummy went the other. The reaction from everyone in that drill was, ‘Holy cow, did you just see that?’”

Naturally, Fahey helped the dazed player to his feet and made sure he was OK.

“He knew how to bring out his intensity at the right moments. In his moments of intensity, you got the picture.”

Passion and intensity for coaching and teaching, as well as a love for his players and students, were common themes provided by those who shared memories of Fahey, who died Dec. 2 after a battle with cancer.

Great legacies are validated by the stories people share, and based on that, it’s obvious that Fahey’s legacy is of a life lived well.

Tom LeCaptain, like Mallien, shared a story of Fahey’s abhorrence for a lack of effort and how he used intensity while maintaining the respect of his players. During LeCaptain’s sophomore year in 1989, Fahey took exception to the performance that LeCaptain and teammate Scott Shefchik were providing on the defensive line and attributed the Eagles’ two-score deficit to rival Kewaunee at halftime to that performance.

“Scott and I were supposed to create a double team so [linebacker] Jim Flanigan could mop everybody up, and we weren’t doing that,” LeCaptain said with a laugh. “[Fahey] was screaming so loud that he was spitting all over us. I don’t think I had ever seen him that mad.”

LeCaptain, Shefchik and the rest of the Eagles’ defenders proved they had received Fahey’s halftime message clearly by holding Kewaunee scoreless during the second half of a three-score win for the Eagles.

Southern Door, anchored by that bullish defense Fahey coached, went on to win the Division 4 state title. Fahey’s defense dominated what most people considered an unbeatable Westby team in a 17-7 win in the final.

Former Southern Door head coach Brent Claflin, who coached with Fahey during the ’80s and ’90s, described him as the consummate colleague. Claflin added that Fahey’s expertise and professionalism made his job as head coach immensely easier.

“I pretty much gave him the defense for himself because I trusted him,” Claflin said. “I had enough to worry about with running the total program, and I knew he would coach at a high level.”

Claflin, who played for Fahey at Southern Door when Fahey was head coach during the mid-1970s, said that he not only lost a great colleague but also a friend.

“His legacy will be around here for a long time,” Claflin said. “I don’t know anyone who didn’t like him because of who he was and how he handled himself. I have nothing but good memories.”

Tony Kiszonas, a science teacher at Southern Door, said he admired Fahey’s demeanor with students and witnessed his expertise in the classroom in person. Fahey started off as a special-education teacher, evolved into a history teacher and eventually became chair of the social studies department and a well-liked drivers education instructor.

“Rich also had a great deal of passion and intensity in the classroom,” Kiszonas said. “This allowed him to reach kids on multiple levels. Along with his other great attributes, he really got to know his students.”

Kiszonas, who has taught at Southern Door since 1981, was effusive when describing Fahey’s influence on his own teaching career.

“I learned the art of teaching from Rich,” Kiszonas said. “He was the package deal. I learned more from Rich’s teaching than I learned in any college course on teaching.”

Author Daniel V. Chappell says, “People remember us, think of us and speak of us for how we make them feel.” Based on the remembrances of those who were fortunate to know Rich Fahey, it’s obvious he validated Chappell’s opinion.

“A number of years ago, there was the loss of a family friend, and I gained a lot of insight on how to deal with loss,” Kiszonas said. “Instead of being despondent and feeling sorry for the loss, I will celebrate the knowing. I’m happy with the fact that we did have the friendship and collegiality for many years. I celebrate that more than I mourn the loss.”