George Larsen, an influential Door County musician, philanthropist and friend, died on Monday, Aug. 5, at 88 years old. He left behind his wife Barbara, sons Jeff and Steven, and grandchildren Blakey and Peter.

During his life in Door County, Larsen was a founding member of the Friends of Björklunden, directed and performed in many musical productions and was a big part of creating the Door Community Auditorium.

But it wasn’t just the finished projects that received George’s focus and passion. He cared about the people he met and worked with along the way.

“I think some people focus on the end result, and he cared about how he got there and the way we treated each other,” Anne Emerson said. “He was a great force.” 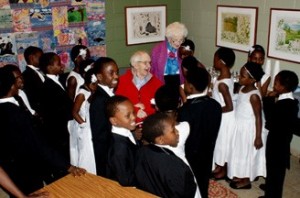 George grew up in Green Bay and studied music at Lawrence University, where he met his wife Barbara. World War II interrupted his undergraduate years, and Larsen left school to crew a B-29 bomber in the South Pacific before returning to finish his degree. He got a Master’s degree at Columbia University in New York and became a high school choral director in Sheboygan.

George’s longtime friend Gretchen Maring said he was an influential teacher and after his retirement was often visited by former students who came to see him conduct and perform in Door County.

“People were drawn to him, and especially young people,” Maring said. “He kept his own counsel very well and he overcame his problems with never a complaint. He always was a positive thinker.”

George contracted polio while teaching in Sheboygan and used crutches for many years. That didn’t stop him from gardening, directing the Peninsula Chamber Singers or cooking batches of Scandinavian Christmas bread.

In 1986 George and Barbara moved full-time to Door County, where they were very active in the community. 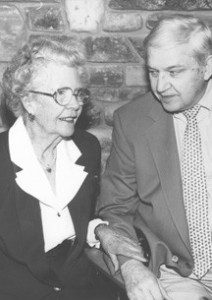 “Both of them are shining examples of how to live,” Maring said.

George continued to volunteer at Björklunden throughout his life, and played a big role in building the Door Community Auditorium.

“He had boundless energy to give to this, and knowledge, and he would follow through,” Emerson said. “He was a real team person and brought out the best in everybody.”

George worked with Emerson and a team of other motivated people to organize, fundraise and build the auditorium. Emerson said George was passionate about creating a place for children to experience music and he and Barbara often sponsored youth-oriented shows such as the African Children’s Choir.

“He would always remind everyone about the year-round use of it and the children’s use of it,” she said.

George’s work on the auditorium wasn’t just behind the scenes. While it was being built he went to the site every day, put on a hard hat, swept up the dust after the day’s work and became close friends with the construction crew. He and Barbara even invited the crew over for dinner.

Because for George, as important as it was to get the auditorium off the ground, it was just as important to care for the people who worked with him along the way.

“We all recognized that as wonderful as the auditorium is, the friendships were even more wonderful,” Emerson said. “It was just a wonderful lesson – don’t work on something if you’re not going to work with really good people. Just getting there was such a pleasure.”