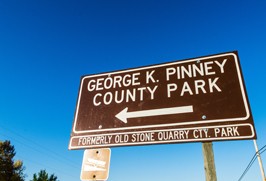 George Pinney’s 17 years of stewardship over the Door County Parks System came to an end on Sept. 28, when he succumbed to the bone marrow cancer he’d been diagnosed with in February of this year.

Pinney, who started as a park aide with the county in 1994 before he became director of the Door County Parks System in 1995, worked tirelessly to both improve upon and expand the county’s parks. Under his watch, Door County gained 182 new acres of parkland, brought in over $12 million in grant money for the parks system, and completed improvement projects at a list of parks so numerous that it would be impossible to name them all.

The most notable of those was perhaps the acquisitions and renovations at the park that was known as Olde Stone Quarry County Park. In April of this year, the county renamed it in honor of Pinney via a resolution submitted in-part by County Board Supervisor Charles Brann.

“[George’s] legacy will probably be seen from the very northern tip of the county, on Washington Island, down to the southern part of the county,” says Brann, who worked with Pinney as head of the county’s Airport and Parks Committee. “I’ve been travelling a lot back and forth from here to Green Bay recently, and when you see that ‘Welcome to Door County’ sign, that’s got George Pinney written all over it. He’s what I think of when I drive into Door County.”

Sean Ryan, director of the Door County Triathlon, says Pinney wanted to make the county’s parks about more than just passive enjoyment. Pinney was instrumental in helping Ryan set up the triathlon, which takes place in Frank E. Murphy Park, and this year was the first that Pinney wasn’t wearing his straw hat and standing at the end of the race with Ryan, holding the tape across the finish line.

“He’d be there all day long, waiting for the last runner to cross,” says Ryan.

Ryan says Pinney was kind, patient, and encouraged him to stick with the event even when it only managed to break even the first couple years.

“He was a wonderful listener, and he had a vision for the greater good of the community,” says Ryan. “He was concerned with the peninsula as a whole.”

Pinney’s passion for the natural world was something he took with him into every aspect of his life. When he wasn’t working on the county parks, he could be found volunteering at Sturgeon Bay Moravian Church or Crossroads at Big Creek, maintaining their lawns and landscapes as well as performing various odd jobs.

“Man, if he could get down on his tractor and go do something for them, he’d always really get a kick out of that,” says Ben Pinney, one of George’s three sons.

Tanner Pinney, another son, says when his father wasn’t helping others he would be at home working on his own lawn, applying the same ethic of improvement and expansion that he brought to the county’s parks.

Tanner says George put all of himself into everything he did, whether it was watching over the county’s parks or watching over his children, Tanner, Ben, and Burke, with his wife, Julie.

“There was no halfway with him,” says Tanner. “He was considerate and passionate and loving and everything the classic father should be.”

Greg “Fuzzy” Sunstrom, owner of Fred and Fuzzy’s in Sister Bay, became a part of Pinney’s family in 2007, when his daughter Claire married Tanner. Sunstrom says Pinney was an avid Badgers and Packers fan who had a great sense of humor and loved to tease.

“He was always telling little stories and little things going on,” says Sunstrom. “When he was telling stories there was just this grin on his face, like he was leading you astray.”

According to Sunstrom and Tanner, Pinney handled his illness as well as could be expected and made sure to organize his personal affairs and reach out to his extended family before his time came to an end.

Even in his last days, the county’s parks were on Pinney’s mind. One of the last conversations Sunstrom had with Pinney was about the possibility of the Emerald Ash Borer sneaking into some of the trees at Door Bluff Headlands County Park.

“He was still worried about his parks and things not getting done that needed to be done,” says Sunstrom.

Tanner says there were a number of projects that George was working on before his death, including trying to open up the cave at Frank E. Murphy Park so the public could explore it and learn about it.

“His passion really was the space around us and the land and the trees and the planet and taking care of it so it’s around for other generations to enjoy,” says Tanner.

A memorial service for George Pinney will be held at 11 am on Oct. 6 at Sturgeon Bay Moravian Church, with visitation from 9 am until the start of the service.

In lieu of flowers, memorials may be made in Pinney’s name to the Sturgeon Bay Moravian Church or Friends of the Door County Parks.