Herbi Hardt’s life led him from a childhood in Germany during WWI, to a radio booth in Chicago, to a home at the corner of Highway 42 and County Highway A, where he died on Friday, March 15 at 101 years old.

Although he led a long, eventful life, he’ll be remembered most for his personality and his passions. Herbi loved history, learning and the environment, and was concerned with the way people across the world were treated. 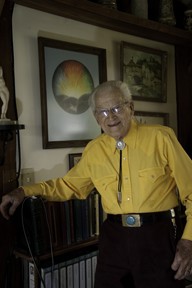 “He had an intense wisdom, vision and passion for humanity and nature,” said Herbi’s daughter Holly Somerhalder. “He was a great dad and faithful husband. He had a lot of determination and the heart of a lion.”

He was also a part of the community. Herbi was a member of the Fish Creek Civic Association, and occasionally helped the Gibraltar Historical Society with research and volunteered at the group’s events.

Eunice Rutherford, Gibraltar Historical Society board member, recalled a skit Herbi performed at a fundraiser last year. It was an old bit from his radio days about outdoor toilets.

“He had props and everything – it was just adorable,” Rutherford said. “He had the whole thing down pat, didn’t have to use cue cards or anything. He knew it all.”

Herbi was an entertainer and a storyteller through and through. In Chicago, where Herbi and his wife Emily raised their children Holly and Herb, Herbi was a well-known radio performer. He sang for the comedy team Louie and the Weasel, appeared in operettas like The Merry Widow and Valkyrie and performed with many orchestras.

Even years after his career as a professional performer, Herbi was still entertaining. He told jokes and stories to everyone he met, and was never slow to come up with an interesting tale.

“That was part of his professional background, and that never left him,” Herb said. “He always enjoyed doing that, and people enjoyed hearing it. He was a great storyteller – he had this knack for making the stories come to life.”

His children didn’t often think about Herbi’s career growing up. They were happy for his success and his love of performance, but to them, Herbi was just their dad.

Herbi made a point to get his kids outdoors, which can be a challenge in Chicago. He took the kids sledding and on hikes, anything to get them outside and spending time together.

“That was a big part of his life, and that’s why he loved it so much in Door County,” Herb said. “He loved living up there and experiencing everything that Door County has to offer in terms of lifestyle and the environment.”

Herbi and Emily moved to Door County in the 1960s. They purchased a motel, then about 10 years later retired and moved to Emily’s father’s property across the street. There, Herbi spent the rest of his life riding horses, gardening and watching the wildlife.

And whether he was inside or out, Herbi was learning.

But learning wasn’t all – Herbi had opinions on those serious subjects, too. He was most concerned with prejudice and violence, and sought a world where everyone was treated equally. He wanted people to be responsible for themselves and each other, to pursue knowledge, and to love each other.

He believed in celebrating people and caring for them while they were alive, not grieving once they passed away, so he chose not to have a funeral. Instead, Herbi threw a 100th birthday party last year.

“He said that was his going out party,” Somerhalder said. “He was in good shape and he could still enjoy people. It was a fun thing and he just wanted people to remember him that way.”