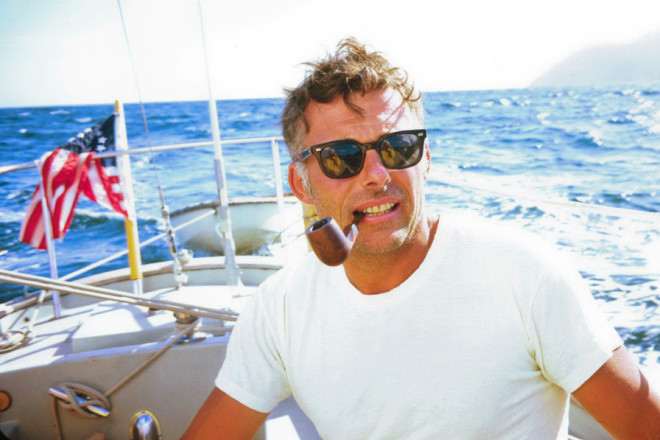 How does a man make his mark on the world?

Perhaps he falls in love with chamber music and learns to play the violin at the ripe old age of 27. Perhaps he leads the charge against the blatant pollution of an important body of water next to where his family lives. Perhaps he helps to organize a successful land conservation group. Perhaps he learns to sail and passes those skills on to his family. Perhaps he lives a life of passion for life itself and embraces as many of its many pleasures as he is able in his allotted time.

It almost seems impossible for one man to have that wide a footprint, but John Wilson Sr. seems to have made his mark in all those ways and more.

“He was a special guy,” said his widow, Karen Wilson.

John Wilson Sr., 88, died on Wednesday, Sept. 9, after complications from a fall.

That very night, the Door County Environmental Council held its annual summer program with an interesting double-whammy speaker program and the naming of the environmental Citizen of the Year (Lynn and Nancy Utesch of Kewaunee County), but the evening began by mentioning that John Wilson Sr., a co-founder of the DCEC and founder of the Door County Land Trust, had died. It seemed like a blow to the gut had been delivered to the entire room at news of the death of this dedicated conservationist.

So what drives a man to such passion for the environment?

“John was on our founding board of directors, and actually, before a board was created, he was sort of the inspiration and guiding force behind the Door County Land Trust,” said Dan Burke, executive director of the land trust. “And then he joined as a founding member of the board of directors, and he continued to serve on the board for nearly 20 years. John was also, I believe the second landowner in the county to put his land under a conservation easement held by the Door County Land Trust. I believe that was in the first or second year of the land trust’s inception [in 1986], so he was a leader in land protection, too.

“Once the organization was created, he enrolled his land under permanent protection of the land trust, so he was more than just words,” Burke continued. “He was all about action. I think that’s probably true with everything he’s been involved with in life, whether it’s music or his passion for keeping Door County healthy as a beautiful place to live, work and visit.”

“He left the board while I was serving as president in ’04 or ’05,” said Bryan Nelson, owner of the Blacksmith Inn in Baileys Harbor and land trust board member with Wilson. “He was an idea guy. He was a glass half-full guy. He was an optimist who thought the world could be made better. He was an out-of-the-box thinker. In that respect, it was always good to work with him. He came at things with angles the rest of the room hadn’t considered. There was always energy and excitement whenever John was in the room.”

Jerry Viste, the recently retired longtime executive director of the Door County Environmental Council (DCEC), said he became involved with the DCEC in 1980 after contacting John Wilson about what Viste refers to as “the power plant episode” – when Wisconsin Public Service was considering first a nuclear plant and then a coal-fired plant on a piece of land on the canal in Sturgeon Bay.

“They were looking for ash disposal sites for the ash that would be generated,” Viste said. “My farm was the No. 1 site. They were just drooling over my 400 acres, surrounded by woods on all three sides, so it wouldn’t offend the tourists.”

So he contacted John Wilson with the recently formed Door County Environmental Council.

“John called me with all kinds of theories of what we could do,” Viste said. “That’s how I got involved with the environmental council. John always analyzed everything in depth and knew a lot of the angles behind what was really happening, the inner workings of the Public Service Commission and the rest of the group that was pushing this power plant issue.

“Of course, John always had a reputation on the board of dealing with a heavy hand,” Viste said. “Someone would say, ‘I hear the heavy hand of John Wilson in there.’ Well, that’s the way you get things done. I hope people say Viste had a heavy hand in dealing with issues.”

Nelson of the land trust backed up Viste’s perception of Wilson in a leadership role.

“He could be very forceful. He had the passion of conviction. He couldn’t be a bystander. That was not who he was,” he said. “He shared that with his wife. Karen and he balanced each other in various ways, but when it came to the environment, they were both equals on that. They were great partners.”

So it seemed natural to turn to Karen for an explanation of his dedication to improving the environment.

“I married him when he was 50,” Karen said. “It’s a second marriage for both of us. I’m very happy we were able to do 38 years, which is pretty good for a second time. He and I were of such equal mind and soul when we met, that is part of what brought us together. He was pretty well formed when I met him, as was I. I would think it would be living in the out of doors and sailing and hunting and all the things that bring you close to the environment. It can’t take a whole lot of abuse.”

All who talked about John Wilson mentioned his abiding passion for life in general.

“Always with a sense of the absurdity of life,” Karen added. “What is that old saying, it’s hopeless, but it’s not serious. I don’t have that quote right, but that was very much how he thought. The absurdity of it all and the joy of it all.”

She mentions that she and John lived halfway down the bluff in Juddville.

“John built the home in 1969. I came in 1977,” she said. “And that’s where we’ve been. We’ve traveled. We have a summer home in the UP [where they also arranged for a conservation easement], where we escape the crowds. But this is our home, and we love the winter in Door County as much as any other season. Some people would consider the home inaccessible. It’s worth a lot of trouble to live here for the beauty. He was a great lover of beauty – visual arts, music, all were appreciated by him. And reading. Our den is chockfull of books.”

His obituary describes John as “an amateur musician.”

He wanted to be able to play chamber music with friends in his own home.

“He did that in our home with friends up until just a few years before he died,” Karen said. “I play the violin as well, so it’s hard for me to believe you can take it up at age 27, but he was so determined.”

Midsummer’s Music Festival was his current passion, and Karen said he loved the early days of chamber music at Birch Creek.

“Chamber music was his favorite, and opera,” she said. “We never missed going to the Lyric in the winter season. Loved the human voice.”

I mention to her that Jerry Viste said John insisted sitting at aisle seats at meetings so he could pop up to make points. She laughed and said, “I don’t know if he would literally sit on the aisle, but he certainly would make his point wherever he was sitting.”

For a better understanding of John’s dedication to the environment, she refers me to John Wilson Jr., who does in fact know the source of this environmental “rosebud.”

“We lived along the Fox River in the ’50s,” he said. “The river was so incredibly polluted, the mantra was, ‘Don’t go near the river,’ when we’d go out to play.”

The Wilson family regularly visited Door County, and it bothered his father that “we’d leave the very clean environment of Door County back to the cesspool that was going into the Fox River,” John Jr. said. “Finally my father organized a group called the Wisconsin Ecological Society, and they sued Fort Howard Paper Company for polluting and won the suit. Then they convinced Fort Howard, rather than trying to appeal it, why don’t they join the suit and they’ll go back upriver, and they went after Kimberly-Clark and Scott, those guys up in Neenah and Menasha, then they went after municipalities. That was how that all began.”

But he reminds us that his father was more than a conservationist, a point he intends to make at an October memorial service.

“I’m going to propose a toast for the things he brought to us. My father had a great love of good food and wine. He became quite a connoisseur and had a substantial cellar. Everybody in our family, we all have a great love for that beverage and it’s all because of him.

“He had a great love of sailing and he brought that to our family. We all became great sailors. I loved it more than anyone else, perhaps, in the family. And the third is the environment. And, lastly, it’s music. He started a chamber series in Green Bay, chamber music that he brought up from Milwaukee, the Fine Arts Quartet. From the time I was in short pants I would be going to those concerts, our family sitting in the front row because our father sponsored it. The Midsummer’s Music Festival was a great joy to him. I will fondly remember him every time I partake or embark on any of those pleasures.”