Lee Traven made the community his family. 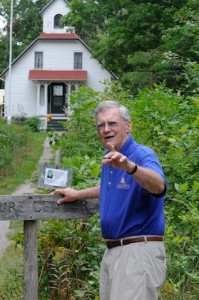 Traven came from a family of philanthropists. His mother, Olivia, was a founder of the Ridges Sanctuary and his father was president of the Ridges.

Traven grew up in Baileys Harbor, and left to attend college at Lawrence University. He graduated, spent four years in the air force, then lived and worked in New York City until he retired and moved back to Door County.

From then on, Traven became a big part of the community. He was a member of boards for organizations around the county, like Scandia Village, and was named Philanthropist of the Year by the Door County Community Foundation in 2011.

The Philanthropist of the Year award is meant to honor people who give of themselves completely, Bicoy said. It’s for people who don’t just give cash contributions, but contributions of time, labor, wisdom and love.

“Lee Traven was the epitome of that,” Bicoy said. “He motivated others around him to join him in his causes – and that’s a beautiful thing. That’s what a philanthropist truly is.”

Even at 82 years old, Traven was a frequent volunteer. He spent every Monday at the Ridges Sanctuary’s nature center, greeting visitors and making them feel welcome.

“He just loved people, and the one way he got to know people and made connections was that he got involved through many different organizations,” said Steve Leonard, executive director of the Ridges Sanctuary.

When he wasn’t volunteering, Traven spent a lot of time in the local libraries, walking his golden retriever KC through Baileys Harbor and going to plays at Gibraltar schools. Leonard said that no matter where he and Traven went, Traven knew almost everybody, as if he were walking through a family reunion instead of through town.

And he treated this community like a family. Even after all the hours Traven clocked at board meetings or greeting visitors, and even after the prestigious Philanthropist of the Year award, Traven was humble about his work.