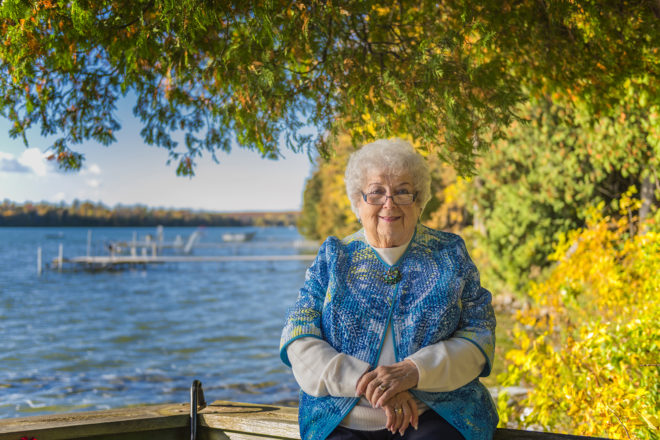 Patty Williamson was 74 years old when she wrote her first story for the Peninsula Pulse – a piece about the history of Ellison Bay’s Pioneer Store, published back in 2008.

At the time, I thought it was a one-off effort. Over my 18 years at the Pulse, a lot of people have told me they want to pursue writing for us regularly. Few of them finish even a single story. Most of those who do find that one story is all they had in them. And when that’s the case, I’m more than happy to take it.

But Patty had more stories to tell, and she relished the process of wringing them from her keyboard. In the 14 years since that first assignment, her byline has appeared in our pages an astounding 340 more times without missing a deadline. She turned in her last article in September, being sure to send it off before leaving on a two-week road trip with Howard, with her beloved husband of 68 years, to see grandchildren play soccer and a great-grandchild ride a horse, and also to attend their 70-year high school reunion. Shortly after they returned to their home on Kangaroo Lake Sept. 27, Patty died.

Patty came here after a long career in public relations for Missouri school districts, earning her doctorate during that time “to show I was as good as the men in the office.” On the side, she nurtured the journalism bug she first caught in high school through freelance gigs and fill-in duties for local newspapers.

But in her years writing for us, Patty became part of the fabric of the Pulse. Alyssa Skiba, our former Arts and Literature editor who profiled Patty for Door County Living magazine in 2015, called her “our Pulse grandmother,” and that seems fitting. Patty checked in on us, and she kept us checked in on her with updates on her family, her trips and her shockingly busy calendar.

Patty wrote with such attention to detail and such love for the people and stories of this place that you’d think she was writing about her hometown. But Patty and Howard didn’t come to this peninsula until 1990, after Patty had been given a book called The Best of Door County and suggested to Howard that this remote peninsula might be a nice place to escape from the St. Louis heat.

Two years later, they bought a home on Kangaroo Lake and have spent half the year here almost every year since, engrossing themselves in the community, in their church, at Northern Sky Theater, and through Patty’s articles, books and presentations.

Patty loved to follow the thread of a story. What seemed to be a one-interview profile would grow to conversations with three, four, five people, each interview followed with an email to me detailing what she had learned and how interesting the person was. (If Patty Williamson didn’t find you interesting, then you aren’t interesting.) She found nuggets in everyone and saw stories where nobody else could see them.

As the email chain for a story grew longer, so, too, I learned, did the story itself. And though that mission creep gives an editor anxiety, it also brings relief because this meant Patty would soon be pitching me a handful more story ideas from what she was stumbling across. They would inevitably become articles that would fill holes in a week when my own stories had fallen through or would end up as features in Door County Living magazine.

There is no better example of this than the time when I asked her to take an idea off my hands – one that had been collecting dust on the “someday shelf” in my brain. My dad once suggested a story about the old rural grocery stores that had mostly disappeared by the end of my childhood, and the special role they filled in their communities as more than just places of commerce. I wanted to do it right, so there it sat for years in my notes, waiting for the right time, before I finally let it go to Patty.

It didn’t take long for the email thread to grow, and grow. I had suggested a couple of stores to focus on, but Patty found more. Then more still. Eventually it became a 27-part series called This Old Store.

“The stores served as community centers as well: repositories of news and places to find camaraderie,” Patty wrote. “Most were heated by pot-belly stoves, which made them a convenient place for men to gather – usually with a spittoon nearby. For many farmers’ wives, the ‘butter and egg money’ they earned each week was their only personal income, and it provided their chance to visit with other women while their orders were being filled. It may have been their only nonfamily social contact in weeks.”

Those details, drawn from her own experiences, peppered her writing and provided perspective few others could offer. These stories, and so many like them written by Patty over the years, put on paper a version of Door County that has either slipped away, or is slipping past us now.

She captured the life of 98-year-old Herbi Hardt, who, as a kindergartner in Germany during WWI, met the Red Baron; Clyde and Greg Casperson and the family funeral-home business; the artist Gerhard CF Miller. She looked back at the Ahnapee and Western Railroad, Leathem Smith and Lake Cinema. Patty loved history and the research that came with trying to unearth information never known or long forgotten.

“Who would’ve ever believed that I’d be in my 70s and I’d finally be doing what I always wanted to do?” she said to Howard years ago. On their drive home in September, she told him she was going to call me when she got back. Patty had more story ideas.

She was gone before she had the chance to call. But I like the idea of Patty forever out there with those final stories, giving me enough hope that another message will arrive in my inbox with her finely cleaned copy, and the story of all the interesting people she met along the way to writing it.

Patty Williamson will be remembered during a memorial service Monday, Nov. 14 at Zion United Methodist Church, 8781 Cty F in Fish Creek. Visitation will take place 12-2 pm, with the memorial service to follow. A separate service for family members will be held in St. Louis at a later date.