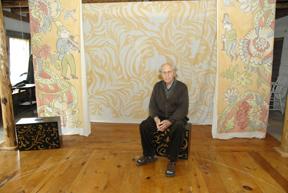 “…and when tired at last, he sat on the bank, while the river still chattered on to him, a babbling procession of the best stories in the world, sent from the heart of the earth to be told at last to the insatiable sea.” – K. Grahame

What links the careers of performing artists like Ed Asner, Elaine May, Paul Sand, Valerie Harper and Robin Williams to Door County favorites like Martha Garvey and Doug Mancheski? Each of these individuals was influenced by directly working with Baileys Harbor resident Paul Sills. His life work as a director and teacher impacted hundreds of acting careers and made an incalculable contribution to American theatre.

His unique childhood learning experiences and a strong partnership with his mother, Viola Spolin, greatly impacted Paul Sills’ approach to theatre and life. Viola Spolin wrote the first text on improvisation for the theatre. The book emerged as part of her lifelong study that began with her mentor Neva Boyd. As son, student and collaborator, Paul gleaned valuable lessons from Viola that, like a pure and deep well, he drew from throughout his entire life.

Paul was the original director and co-founder of Chicago’s Compass Players in 1955, the first improvisational theatre company in the United States. Then, in 1959, Paul started The Second City in Chicago. It’s since gone on to become one of the most recognizable names in theatre with locations in Toronto, Los Angeles, Las Vegas and Detroit.

In 1968, Paul created “Story Theater” which drew from stories, myths and legends. The original Story Theatre production was a sensation in Los Angeles and on Broadway. Paul used this form again and again where expertly revisited tales, combined with Spolin’s improvisational techniques, gave him wide latitude to elicit resonant interpretations of the classical texts from his players. In these performances, actors played as both characters and narrators. Paul contributed to his mother’s legacy through his natural talent as a highly gifted director.

Playwright, director and Emmy-winning writer Vince Waldron said, “There’s an old expression that says you can’t step into the same river twice. Paul understood that concept better than anyone. He knew it applied to theatre, as it did to all of life. And so he chose to live each day in the here and now, always aware that each drop of water that rushed past his feet was precious. And that, in the next instant, it would be gone.”

His productions were unencumbered by props and theatrical mechanisms. He coached players to transform space, creating imaginary scenes that held all the production value a story could need. Carol Bleackley Sills, Paul’s wife, who collaborated with him on his productions, created minimal yet luminescent and painterly environments that offered luscious platforms for the action to unfold.

All the while, Sills taught scores of actors and non-actors the fundamentals of theatre games and improvisation technique. He co-founded the New Actors Workshop in New York, a two-year acting conservatory, and he taught at Bard College, and founded the Wisconsin Theatre Games Center at his farm in Baileys Harbor, which has attracted talent from around the world.

Drawn by Door County’s natural surroundings, Paul began establishing himself within the community decades ago. The farm on Mill Road that Paul and Carol purchased has been a safe and inspiring place for their children and grandchildren to live and return to over the years. With much of it preserved through the Door County Land Trust, Paul and Carol have been impeccable custodians of the land. Despite his productions, Paul has been a quiet presence in the community. He never had patience for fanfare about his stature. For him, engaging in his process and the integrity of his practice always had a heightened focus over any recognition that came with high-profile productions.

Martha Garvey, a regular in his community theatre productions, said Door County “totally lucked out.” Locals were exposed to “really fun shows here for a lot of years. Living [in New York part time], I see a lot of theatre, and there is nobody who does theatre like Paul.”

Having worked on lighting for some of Paul’s community theatre productions at the Peninsula Art School and the Ephraim Town Hall, I had a birds-eye view of the way he put a production together. He loved working with local people and formed a small, trusted troupe. For many winters, they enlightened dedicated Door County audiences who would brave whatever winter weather to come see the productions.

Paul’s contributions to American culture and our theatrical tradition will be celebrated, taught and honored for generations to come. In this way his legacy will no doubt continue to evolve as the spirit and wisdom that Paul brought into the world continues to be a vital reference and inspiration for many.

His Work Lives On…

The family is planning a memorial service at the Baileys Harbor Town Hall July 18. In lieu of flowers, contributions may be made to the Paul Sills Wisconsin Theatre Games Center. This summer’s Story Theatre Workshop at the center will be led by Carol and Neva Sills and take place between July 28 and August 1. A Teachers’ Workshop will follow in early August.