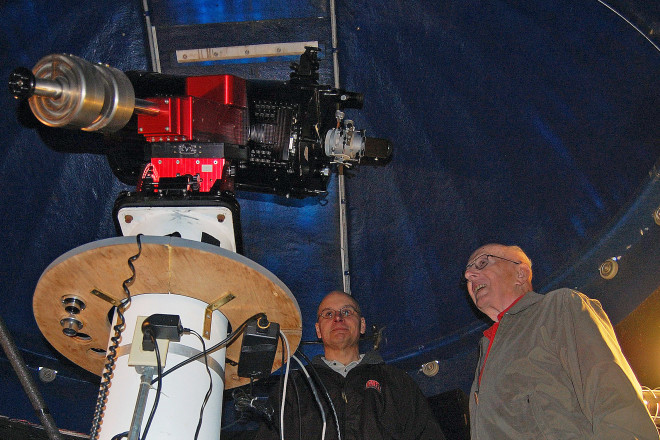 Dave Udell and Ray Stonecipher in the Leif Everson Observatory at the Ray and Ruthie Stonecipher Astronomy Center in Sturgeon Bay. Photo by Jim Lundstrom.

Ray Stonecipher, a great advocate for the Door County environment – terrestrial and celestial – died of cancer on Aug. 27, 2015. He was 87.

Stonecipher retired as a University of Wisconsin-Whitewater professor of astronomy who brought his love for the skies to Door County when he moved here, helping to create the Door Peninsula Astronomical Society, which meets at the Ray and Ruthie Stonecipher Astronomy Center in Sturgeon Bay. His titles with the society included “curator” and “inexhaustible resource.”

Friends knew him as a modest man, a lifelong educator, a voice of reason and full of new ideas.

Besides being an advocate for the environment as a member of the Door County Land Trust, Stonecipher was also on the board of Door Property Owners and the board of directors of the Friends of Toft Point.

His dedication to astronomy led him to help educate Door County on the international dark sky movement, including the recent effort to have Newport State Park designated an International Dark Sky Park through the International Dark-Sky Association (IDA).

“The application has been submitted,” said Newport Manager Michelle Hefty. “We were hoping we would see it through before Ray passed. We’re all very saddened we weren’t able to get it done before he passed.”

She said the IDA board meets on Sept. 28 to consider the application.

“We’re in the waiting stage right now between submission and presentation to the board,” she said. “Without Ray, things wouldn’t have rolled as quickly. It was too much for just me to do. Ray jumped right on the bandwagon. My heart sank when I found out he had passed. As someone said, he’ll be a star up above watching what was going on.”

A gathering of friends is being planned for the fall. One of those friends, Charlotte Lukes, said though Ray was a modest man who did not want an obituary, he would probably approve of donations in his memory to the Door Peninsula Astronomical Society, PO Box 608, Sturgeon Bay, 54235.

The IDA posted a tribute to Ray Stonecipher that you can find here.