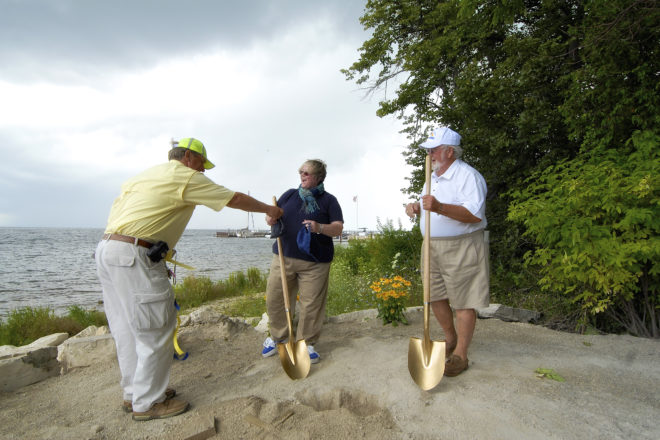 Some of those who take the big chair on municipal boards preside, others lead. Nancy Fisher was one of the others.

If you didn’t know better, you’d think that in her six years as president of the Village of Egg Harbor Fisher was seeking out battles. When she first became a trustee in 2004, the village marina was crumbling and the beach was little more than a postage stamp. Egg Harbor was a village full of lodging establishments that accommodated people who went to other peninsula communities for recreation.

But when she became president of the tiny village of just 202 residents, she took on big projects. First up was the marina. Fisher led the board toward a larger vision laid out by Mike Fitzgerald and the Harbor Commission. That vision would be challenged by residents. Eventually Fisher and the board scaled back the plan to reach a compromise that most residents were more than happy to embrace.

“She could be polarizing,” said Bob Dickson, who served on the board with Fisher. “She was a strong woman in government in little Egg Harbor. She was definitely one to think outside the box, and she was a bulldog too.”

The marina was the largest of several major projects the village tackled during her tenure. Fisher, who died Nov. 21 at Casa de la Luz Hospice in Tucson, Ariz., of metastatic liver cancer at age 69, launched a dark sky initiative to limit light pollution from village fixtures, co-founded the public arts initiative and the Harbor Hounds Dog Park. She led the way as the village paid $1.6 million to buy land to expand the public beach.

Fisher’s love of dogs spurred her interest in building a dog park, and she also brought her time and skills to the Door County Humane Society. After leaving the village board Fisher moved to Sturgeon Bay, where she spent five years at the Boys & Girls Club of Door County making a resounding impression on her co-workers there, including CEO Julie Davis. 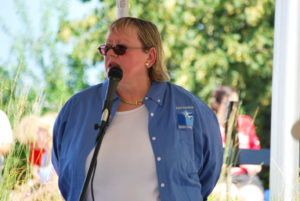 Nancy Fisher speaks at the grand opening of the Egg Harbor marina in 2010. Submitted.

“Everything that Nancy did was about being involved in the community and giving back to the community,” Davis said. “More than anybody that I’ve ever known, the community was her family. It’s what drove her.”

Jeannie Bernard, a cousin, described Fisher as a very private person in her personal life who was nonetheless extremely community-focused. She said Fisher grew up in Evanston, Ill., but loved Door County from her childhood, when she would visit her grandparents’ home in Fish Creek.

“When she moved here she was very interested in civic work,” Bernard said. “She decided that she really wanted to do more service and started by volunteering at the Humane Society. Then she was doing stuff with the Boys and Girls Club. She loved that job.”

Before she left the village board she took part in one last controversial decision, the purchase of the long-standing Lena’s Sip and Chat with a plan to raze the building and build a new library and community center. It was one of several decisions that I disagreed with over the years, but Fisher was a leader that could handle the criticism in print or in person. She didn’t hide behind her board or administrator when it was time for tough calls or conversations. She was out front and always available and responsive by phone or email.

In an exit interview with the Pulse in 2012, she encouraged more people to run for office, if for no reason than to have a contest of ideas.

“To anyone that’s interested in running for office I’d encourage them completely,” she said. “I hate the fact that so many of our races are uncontested. I find that most people are very civil when they deal with trustees. Their opinions are important and they matter tremendously and people do take the time to let you know what their ideas are and that’s a really good thing.”

A celebration of life for Fisher will be held May 19 at the Kress Pavilion in Egg Harbor. She asked that any donations in her honor go to the Wisconsin Humane Society Door County Campus.