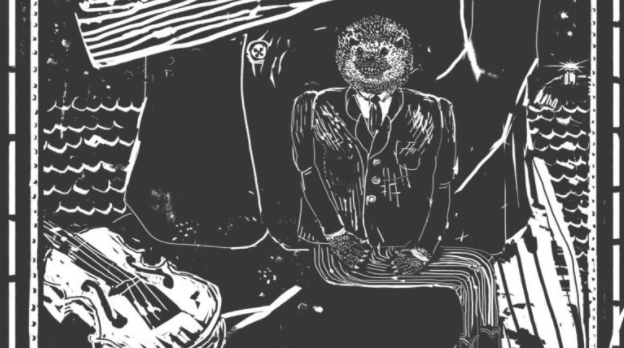 Over the years, I’ve talked to a number of folks who are deeply entrenched in the maritime industry up here, and during those discussions, a name has come up time and time again. A name that piqued my interest enough to pull me into the archives and, believe it or not, got me to pick up a book or two (which is saying something for a 26-year-old in 2019). A name that, any of my co-workers here at Door County Living will tell you, became my obsession for more than a month.

That name is Amos Lovejoy.

Besides having the perfect cowboy name, Lovejoy has been credited with a number of noteworthy things. He is considered to be the first shipbuilder in Door County. He was the first to name the peninsula’s northern-most town, which he called Hedgehog Harbor, but it’s now Gills Rock. Lovejoy was an accomplished ventriloquist and violinist, and he was known as the “bachelor of Rock Island,” which was not a kind moniker because his friends often jested about how he would run scared at the sight of women. Lovejoy was also a decorated Army veteran, and not only was he the first white settler on Rock Island, but he — along with Increase Claflin — was one of the earliest white settlers in all of Door County.

The first story I heard about Lovejoy was the Hedgehog Harbor story. The legend goes that he came up from Sturgeon Bay one winter, tied up his boat, and waited out the ice and snow on the peninsula. When he returned to his boat, he found that a family of porcupines had eaten the bottom of his boat, and I guess he started telling everyone who’d listen that the area was to be known henceforth and forthwith as Hedgehog Harbor, despite the facts that hedgehogs are not native to North America and that porcupines are rodents and not related to hedgehogs at all.

And I guess the name Porcupine Port wasn’t on the table for some reason.

If you’ve heard of Amos Lovejoy at all, I’m willing to bet this is the story you’ve heard as well. In fact, when I googled Lovejoy, this was pretty much all I found. On website after website, the Hedgehog Harbor story was copied and pasted a dozen times, each one elaborating on some things, embellishing others. It was at that point in my research that I had a thought …

Was Amos Lovejoy a real person, or is he a Door County tall tale?

So I dug deeper, to find as many writings about Lovejoy as I could. The first place I looked was Old Peninsula Days, which is where any research into Door County’s past probably begins. Much to my surprise, its author, Hjalmar R. Holand, didn’t write about Amos Lovejoy (well, he did, but more on that in a moment), so I had to search elsewhere.

My search led me to Conan Bryant Eaton, author of Rock Island, who describes Lovejoy as one of a number of settlers on Rock Island following the establishment of the Rock Island Lighthouse. Though he appears several times in the book, very little is shared about Lovejoy besides the Hedgehog Harbor story and one sweet anecdote about playing the violin so couples could dance to his music. The final mention of Lovejoy in Rock Island tells of his departure back to his native Massachusetts.

I found brief mentions of Amos Lovejoy in several other books — the works of Marvin Lotz, Dick Purinton and Gayle Soucek — but they were either the Hedgehog Harbor story or even smaller notes about his shipbuilding. I looked for his tombstone, family tree, any anything else I could find to answer my question about the reality of his life, but I found nothing substantial …

Until I revisited Hjalmar R. Holand.

Remember how I said I couldn’t find anything about Amos Lovejoy in Holand’s Old Peninsula Days? That’s because Holand didn’t write about Amos Lovejoy. He wrote about George Lovejoy. Who was George Lovejoy? Holand describes George as a tour de force. He was an Army sergeant, a famous hunter, tracker, shipbuilder, expert violinist and master ventriloquist, fluent in Chippewa and a fervent trickster.

“This, with his reckless bravery and easy skill in every undertaking” made Lovejoy a “veritable demon,” writes Holand, creating this larger-than-life icon whose life brimmed with thrilling escapades and narrative irony due to Lovejoy’s almost comic fear of women.

I was at a crossroads. Was he Amos or George? I found only two sources for George Lovejoy stories. One was Holand, but the most important use of the name took me back to Conan Bryant Eaton and a short piece he wrote for the Door County Almanac in 1982, in which he actually calls Holand out for using the wrong name.

This was where my research finally concluded because Eaton cites primary sources, including quotes from a letter written in 1880 by Oliver Perry Graham that support a lot of the stories surrounding Lovejoy. Eaton also provided the most important proof of all in answering my burning question about whether Lovejoy was a real man or a Door County legend: evidence that Lovejoy was on Rock Island during the 1855 census, which led me finally to his signature on that very document.

A. Lovejoy was real.

I wasn’t disappointed that I didn’t discover Door County’s first tall tale. What I began to feel instead was a familiarity with a man whose photo I’ve never even seen. His life, if Holand is to be believed, was one of adventure, music, practical jokes and comedic irony, and even if all of that was embellished to create a richer narrative for Holand’s work, I think it’s wonderful that we know anything about this man at all. What a testament it is that our deeds, no matter how mundane, can be remembered long after we’re gone.

If you strip away the narrative hyperbole, Lovejoy was a man who lived alone on an island and did his best to make it through each day, the same as anyone else, then or now. I don’t know what happened to Lovejoy after he left Door County and returned home, but I know that wasn’t the end of his story, and I hope he lived a long and full life.

I share in that hope with Jesse Miner, whom Eaton quotes in the almanac: “A year or so afterward we heard that he had got married, and I suppose he lived happy ever after.”