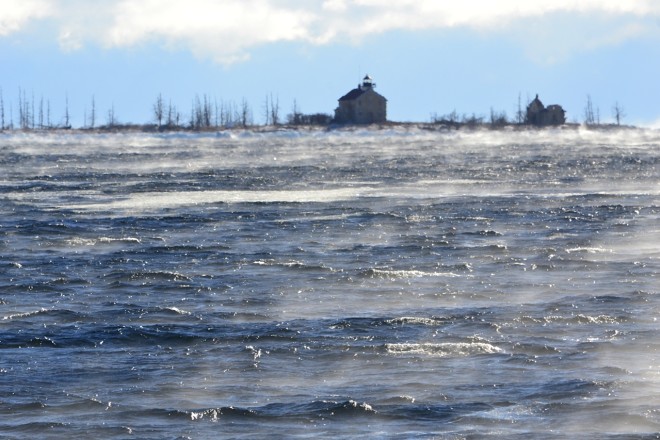 Immediately after work on Friday, Feb. 12, I hightailed it for The Sweet Retreat in Sturgeon Bay. I was Washington Island-bound for the Friends of Plum and Pilot Islands (FOPPI) winter board meeting. 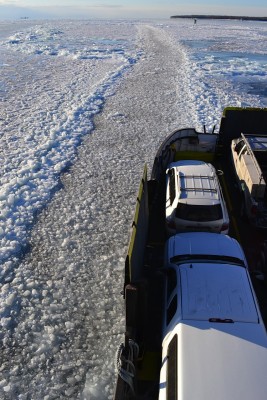 The weekend forecast called for the coldest weather of the winter. When I arrived at the Retreat the National Weather Service reported an air temperature of +1 degree F with a wind-chill of -21. I fired up the furnace and went to McDonald’s, where I savored some fast food as slowly as possible and scoured every detail of a local newspaper. An hour later, the furnace was beginning to take hold. Brutal breezes howled throughout the long winter’s night as I hibernated under a down comforter until daybreak.

Saturday dawned clear and even colder. The -26 degree wind-chill caught my full attention as I loaded the car. It was clear that El Niño must have returned to the Pacific for a tropical vacation. 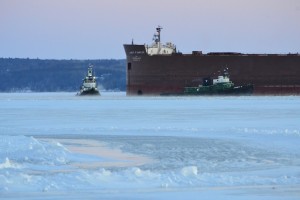 The Jimmy L and another tug were conducting ice-breaking operations around Bay Shipbuilding as I continued on my northerly trek. When I drove out onto the Northport pier around 8:25 am, I saw a ghostly apparition appear out of the sea smoke in Death’s Door. It was the Arni J. Richter cutting through mostly open water. Its bow was adorned in baleen-like ice from the frigid ride across the strait.

The passage to Washington Island was generally ice-free, but it was unbearably cold when the vessel was traveling into the wind. I’d sneak outside briefly to snap a photo, and then I quickly had to duck back into the flesh-saving warmth of the ferry’s heated cabins.

A productive discussion of the future of the Green Bay National Wildlife Refuge was held in the Washington Island Community Center. Plans for Plum Island dock repairs and restoration of the life-saving station were encouraging as FOPPI members and the U.S. Fish and Wildlife Service continue to work together on these important projects for Door County.

I was left with a full afternoon to explore Washington Island in February. Fortunately, the wind dropped and the temperature warmed into the mid-teens under a cloudless blue sky. Hoyt Purinton recommended I check out the Little Lake Nature Preserve, now under the auspices of the Door County Land Trust. Access to it is along Main Road on the island’s northwestern lobe. Turned out, it was harder for me to find than expected. I flagged down a passing motorist who took me right to the trailhead. 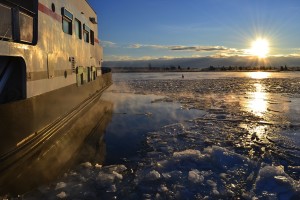 Snow was hard-packed, which made for easy walking. I ended up carrying my snowshoes most of the time. The highlight of this hike is the isthmus that separates Little Lake from Lake Michigan. A distance of only about 30-40 feet keeps the mighty Great Lake from spilling into the small wilderness body of water. Just offshore from the isthmus (I was thinking this would be a great spot to construct a replica state capitol building!) was an Aqua Velva-colored ice shove calling my name. Massive blue-green cakes of frosted frozen water were piled helter-skelter on top of one another. It sure looked like the Antarctic to me.

I retraced my tracks and headed east to Jackson Harbor. Here the ice situation at the end of Old Camp Road was very different. Much open water existed between Washington Island and the Thordarson Boathouse. There would be no safe way to walk to the state park this winter. I decided the next best place to look for ice shoves would be by the Potato Dock at the entrance to Detroit Harbor.

The ice formations here were spectacular. The pier’s riprap was glazed in winter splendor. Blocks of glacial-colored ice were set aglow in the late afternoon sun. Delicate frozen shards could be seen stacked in serpentine rows. Such a wintry setting held my rapt attention until thoughts of supper led me to move on. 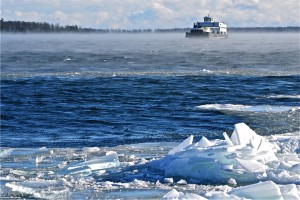 My car’s thermometer registered -8 on Sunday morning. Jeff Cornell had the ferry warming up when I pulled into line at about 7:20 am. Smoke from the powerful diesel engines filled the air as the boat jockeyed into position to begin loading vehicles for the ride back to the mainland.

The Arni J. Richter broke ice all the way to Northport that sunny, cold morning. Despite having very cold hands and toes, I felt blessed that El Niño had retreated for a few days allowing me the opportunity to enjoy a frigid winter weekend in a beautiful part of northeastern Wisconsin.