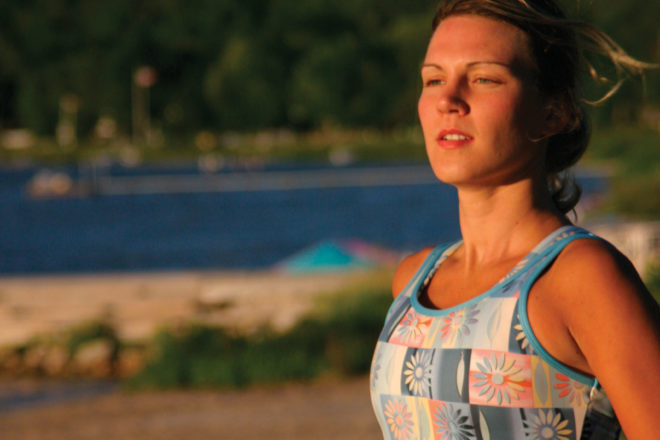 I consider myself a fortunate person to be able to witness the dawn of a new day on the peninsula from 75 feet above Eagle Bluff in almost total silence. While getting up at 5:30 in the morning to go for a run isn’t for everyone, the serenity infused by the view from Eagle Tower at that hour makes one feel as though they’re on top of the world, even if only for a few moments before running down the steps to head off to the office, restaurant, resort, or worksite.

I’ve never been fond of defining a person based around a single lonely word. One word leaves out so much and can rarely encompass a personality or life. That said, I feel free to make the following statement: I am a runner. While I make a living doing something entirely apart from running, it is the “running” part of my life that is the actual living, and there is no finer place than Door County to do this. The state park system, miles of meandering country roads, and lakeside trails are a treasure to recreational runners, our own Olympic hopeful, and those just out for some fresh air. The connection to the natural surroundings is something runners in Door County could rave on and on about.

As a runner I have lived in different urban and suburban environments. I have taken the first steps out of my door to encounter residential boulevards with neighbors walking their dogs, young children learning to ride bikes, and the buzz of traffic from busy streets. Doing this everyday you get used to the distractions. Attempting to keep a focus and pace can be difficult; the workout is getting done, but many times true relaxation and appreciation for the surrounding natural world simply fails to occur. A person might not even be aware that it is possible to attain such peace from exercise. I hadn’t fully grasped that concept until I moved to Door County nearly four years ago from the Chicago area. I became more serious about running when I discovered silence in the forest. No cars, no horns, no eight-lane highway traffic, no smog at 6 a.m. You can hear your own breath and your footsteps on the road, and these are fabulous sounds. No dodging the tyke on the tricycle, the six women walking shoulder to shoulder across the path, or the roller blader wobbling back and forth. I hadn’t realized such obstacles detracted from my running but they had become the object of my focus and my reasons to stay alert.

The move to the peninsula proved to be a drastic lifestyle change in many ways, but especially when I put on my running shoes and headed out the door for my first few runs. I can actually admit to being alarmed by the silence and the realization that no other person was anywhere in sight. It hit me at this point that I had become so accustomed to distractions that I had lost touch with what I was doing, how I was feeling, and simply clearing my head.

What I have discovered in the four years since that time is a simple truth. It’s not terribly shocking – in fact, it is the same truth that many find when they visit the Door. It is the important realization that nature suits us. It has the power to calm, regenerate, rejuvenate and enrich our souls. This truth applies to so many activities whether it be hiking, painting, writing, fishing, biking, kayaking, or in my case, running.

Naturally, the question “where” arises. Where is the prime place to run, to witness the county’s peaceful meadows, orchards, and forests, to become lost in the natural world? The question has infinite answers depending upon what type of surface and experience you desire. While it is probably the most highly used trail in the county, Sunset Trail in Peninsula State Park is no less a favorite; it is a great, easy-access trail that fulfills what many runners and visitors seek. The trail begins in Fish Creek at the park entrance and traverses through forest and wetlands, offering a packed-gravel trail with rolling hills and lake views as you near Tennison Bay and Welcker’s Point. This is a high-traffic trail, so the best time to run it is early morning or after 6 p.m.

Other favorite Peninsula Park trails are Sentinel Trail, near Eagle Tower, and the system of trails behind Gibraltar School that wind through the dense part of the park toward areas such as Nicolet Bay. I often mix it up a little, combining trail and road running. I have been known to park at the Ephraim beach and run to the park to catch some of the road hills, then head off on a park trail or two and back to the road to finish things up. The reward in July and August is a post-run swim in Lake Michigan, which tops my list of ways to end the day.

While it is arguably the most popular park, Peninsula isn’t the county’s only natural gem for runners. In Newport State Park, there are rough terrain trails to discover, like Newport Trail, Rowley’s Bay Trail, and the Europe Bay/Hotz Loop. Other rough terrain trails can be found on the beach at Whitefish Dunes State Park and, for those near Sturgeon Bay, in Potawatomi Park.

In addition to the state parks’ trail systems, the back-roads of the county can be just as breathtaking. To the east of Sister Bay, views of farmsteads, rolling hills with hay bales, cherry orchards, and glimpses of Lake Michigan are common. These vistas are especially satisfying from roads like Woodcrest, Waters End, Appleport, and Plateau. In Baileys Harbor, Ridges Road offers a flat, fast running surface near the water’s edge. Some favorites in Ephraim remain Townline, Dane, Norway, and Settlement, where I often spy a red fox in a certain meadow nearly every time I run by. Certainly not to be forgotten are roads in the Fish Creek/Gibraltar area, such as Spring, Peninsula Players, Gibraltar Bluff and the always enjoyable Cottage Row. There is something about the smell of spring along this road in May and early June that is incredibly enticing after a long, cold winter.

Aside from these peaceful running routes, there are a number of unique races which are held during the spring to fall seasons around the Door. The runners in the community are extremely supportive of each other, despite the fact that they are scattered from Sturgeon Bay to Gills Rock and have varied talents in events from the mile to the ultra marathon. Beginning in May with the Blossom Run in Egg Harbor (along pristine White Cliff Road), races are held throughout the high season. Road races offer a little friendly competition in distances ranging from 2 miles to 10 kilometers. While many of these races have already passed us by this year, one should not be too intimidated to show up at the starting line for the remaining races and “Fun Runs” held in Algoma (August 9), Fish Creek (August 30), Potawatomi Park in Sturgeon Bay (October 4), Sister Bay (October 19), and Sevastopol (November 8). You may even be lucky enough to “run into” Sister Bay’s very own Olympic marathon hopeful Wendi Ray somewhere along the way. Ray has qualified to compete in next April’s Women’s U.S. Marathon Trials in St. Louis, Missouri. She lives and trains year round in Door County and makes an appearance at a number of the local races, providing an extra air of excitement.

Door County does seem to have all a runner could ask for in a training ground to call home. There are the trails and the roads and the races and the solitary workouts, each different run providing its own unique enrichment. I do not regret trading the distractions and pace of life in the city for the delights of the wildlife and the earth this county offers. It is a decision I am repeatedly thankful for making, as it has proved to be more fulfilling than I ever imagined. As I stand atop Eagle Tower and take in the view of the islands, water, and horizon, I have to smile and remind myself how much I enjoy the silence of a run these days.