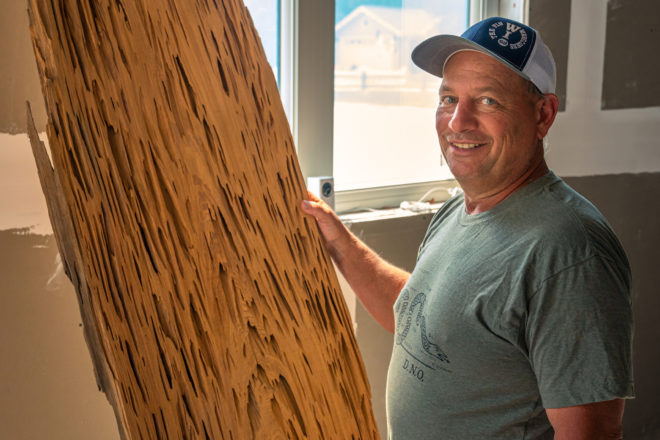 A carpenter by trade, Fred Wahlen found his creative side when he discovered the beauty of old sunken cypress while helping to rebuild homes after Hurricane Katrina. Photos by Brett Kosmider.

Marsha and her husband, Steve, have five pieces of Wahlen’s specialty wood furniture in their Fish Creek home, including a custom-made coffee bar and plant stand.

The Krzyzanowskis’ interest in his work was ignited three or four years ago when they were looking for furniture for their house. They wanted something a little bit rustic and hadn’t seen anything they liked. They happened to be shopping at Twisted Tree in Sister Bay and loved the unusual woodwork in the store. It was just what they were looking for, and the person behind it was Fred Wahlen.

Wahlen, 56, has been focusing on what he calls his “creative work” for about 10 years, but his woodworking career started in construction; building and rehabbing homes. He went to college in New Orleans and returned to the area after Hurricane Katrina to help rebuild homes.

One of his projects was reconstructing a home that had been built in the 1850s. The owner wanted to rebuild with traditional materials from that period, which meant cypress. A relationship with a local sawmill introduced Wahlen to what has become his preferred medium: sinker cypress. He explained that sinker cypress wood is defined as logs that got lost as they floated in a river from a forest to a sawmill.

“A lot of these logs were so old and heavy,” he said, “that they would sink around the mill or become detached [from the log rafts]. They would sink to the bottom of the bayou or the river, and they’ve been left there to be found in modern times.”

Wahlen said the logs he uses have been underwater for 100 years or more, and they’re typically found accidentally when someone is building a dock or dredging. Cypress is a straight-grained wood that he finds easy to work with, but he views sinker cypress as especially beautiful.

“When [the logs are] underwater, the minerals give it a real character — different colors,” he said. “Depending on the minerals in the particular water that they lie in, it could change the wood from just a darker brown through many different colors of the spectrum: green, reds, oranges, yellows. The wood lends itself to great beauty once a piece of furniture is made from it.”

Wahlen showcases that beauty in pieces such as benches, tables and doors, letting the natural color of the wood shine and covering it only with clear lacquer. Many of his pieces feature a live edge, or the natural edge of the log.

Before COVID-19, Wahlen sold his furniture at Coastal Classics in Sister Bay, but during the past year, the pandemic-driven increase in demand for outdoor spaces has kept him busy with traditional construction projects. Most recently, he worked on an outdoor patio for Casey’s BBQ in Egg Harbor.

Although Wahlen doesn’t have any formal training in woodworking, he does have a lot of passion for wood and its story. The self-described history buff has researched the sawmill and town where he sources a lot of his sinker cypress.

Wahlen noted that at the time they were cut down for lumber, the cypress trees were typically 400-500 years old.

“You can’t find the beauty of that old wood,” he said. “You can’t cut down a tree now and get the same thing. That age isn’t reproducible.”

Wahlen’s work gives his customers both a piece of art and a piece of history.

“He brings out the best features in the wood,” Steve Krzyzanowski said. “He has this super artistic side that I don’t think people always see.”