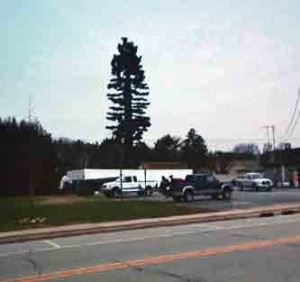 This is how the monopine cell tower will look from Hwy. 57, as presented by AT&T and the engineering firm Ramaker & Associates, Inc.

Baileys Harbor will have the distinction of being the first community in Door County to have a camouflaged cell tower. In spring of 2016, AT&T plans to erect a 65-foot-tall monopine – a cell tower disguised as a pine tree, complete with branches and bark-like material on the pole – in an area owned by Cornerstone Pub.

At a meeting in the town hall on June 24, AT&T representative Julie Tonkovitz and Brandon Finley of AT&T’s engineering partner Ramaker & Associates explained the monopine concept and talked about the agreement reached with Paul Salm of Cornerstone Pub. “It’s not going to look like a normal cell tower,” Tonkovitz explained to the dozen people who turned up for the meeting.

She explained that 250,000 AT&T subscribers traveled through Door County last summer and fall with very little coverage for their cell phones and other devices.

“That’s what we’re trying to resolve,” she said.

Salm said he was skeptical about the possibility of a camouflaged tower until he sat down with AT&T and discussed specifics. The tower will be erected in what Salm referred to as a currently unsightly area where he keeps dumpsters.

“They have gone to great lengths to compliment the surroundings,” he said. “This will very much clean up the area.”

The tower will be encased within a fence with a 40’x50’ footprint. The fence will also contain a small maintenance building for the tower.

“When they put a 65-foot fake tree in, it’s going to look like a 65-foot fake tree,” said Tim Lawrie, the one person at the meeting who was vocally against locating a camouflaged cell tower in downtown Baileys Harbor. Lawrie lives directly across Highway 57 from where the tower will stand.

“I’m not happy about it, especially the way it was handled,” he said. “I would think something that important, especially to the aesthetics of Baileys Harbor, would at least go to the neighbors and property owners. I had no idea this was going on. It’s a hell of a way to run a railroad.”

Lawrie said he first learned about the temporary tower that was erected last July when he was sitting on his porch and saw workers doing something across the street.

“I went over and asked them what was going on. They said they were instructed not to talk to anyone,” Lawrie said.

At the meeting, Lawrie asked if anyone had done an environmental impact study, specifically on the effect of cell towers on wildlife. He was told that the tower is in FCC compliance.

“I don’t know if anyone else in the town has noticed it, but since the temporary tower went up, there are no more Purple Martins in the neighborhood. Purple Martins eat bugs. There are no Purple Martins and there are a lot of bugs,” Lawrie said. “I’m not trying to stew things up. I’ve noticed that stuff. We had to power wash our house for the first time since we lived there because of all the bugs.”

Lawrie said he would have liked the town board to have taken a stand on the cell tower issue.

“It’s been handled in a horrible fashion,” he said, adding, “I’m an old soldier. We’ve had a fight but we haven’t had a battle yet. The battle’s going to come. I’m going to stand up and say my mind.”

Tonkovitz said AT&T is continuing to talk to Ephraim about erecting a tower there, and has reached an agreement with the Landmark Resort in Egg Harbor.

Jeff Clark, president of the Landmark board, said the board has entered into an option with AT&T for a monopole tower near another company’s lattice tower.

“They did put in a temporary tower, primarily for our guests who were getting no reception at all, but the reach isn’t very far,” Clark said. “We’ve been working with them for two years to get this finalized. Now it’s up to them. Last I heard, they do plan construction next spring.”