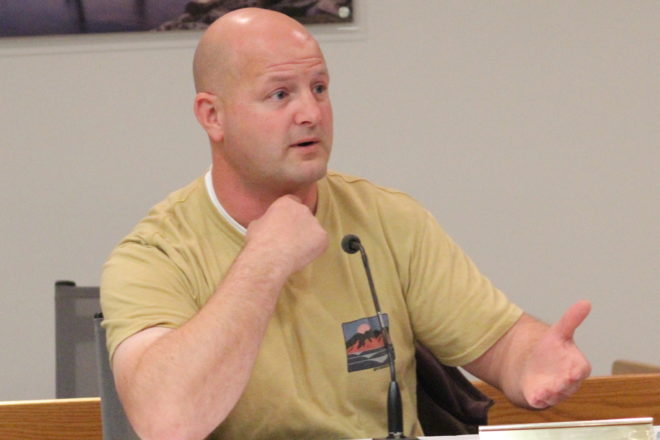 City engineer Chad Shefchik informs the Sturgeon Bay Common Council on Nov. 15 about the progress to clean up a site along North 14th Avenue where an apartment building is planned. Photo by Kevin Boneske.

The Sturgeon Bay Common Council approved a pair of motions Nov. 15 related to a three-story, 22-unit apartment building planned at 1361 N. 14th Ave., on the site of a former cherry-processing facility near Tadych’s Marketplace and Walmart.

The council backed a Financing/Purchasing and Building Committee recommendation for the developer, Estes Investments, to receive an incentive package for the apartment project.

The council also approved a plan commission recommendation to rezone the property’s east side, which has 32,344 square feet, from Agricultural to Multiple-Family Residential.

Community development director Marty Olejniczak said the estimated cost of the utility extensions is $163,000, for which the city has American Rescue Plan Act funds available that could be used to pay for them.

Olejniczak said Estes sought financial assistance because the cost of constructing the building – estimated at $3.5 million – and the added cost of extending sanitary sewer and water lines to the property made the project economically unfeasible.

Based on a future assessed value of $2.2 million, Olejniczak said the apartment building would generate $17,500 annually for the city’s portion of the property taxes.

The apartment building is planned on the east side of the property, with 12 storage buildings being built on the west side.

Much of the council’s discussion focused on conditions that the council sought to have cleaned up in response to concerns expressed by neighbors about debris piles on the site and the potential for flooding and/or erosion.

City engineer Chad Shefchik said that as of Nov. 15, work had not yet begun on the retaining wall, which could be difficult to complete before spring. The drainage ditch is about 90% completed.

“I don’t see any imminent danger to any other properties in the area,” he said. “It’s definitely going to drain and do its job, and it’s following along with the plan and getting close to [being] completed.”

Shefchik said the project plans would need to be approved by the city’s Aesthetic Design and Site Plan Review Board before the apartment could be built.

Dave Phillips of Bayland Buildings, which would be the general contractor for the apartment project if it proceeds, said a lot of architectural work had to be done before the plans would be submitted to the Aesthetic Design and Site Plan Review Board.

Phillips said the site was recently “cleaned up substantially,” but there is more to do.

To ensure the stormwater work would be completed, city administrator Josh VanLieshout said the project’s public improvements could be included in a development agreement between the city and the developer.

“As far as putting more conditions on a rezoning, frankly, once you approve the ordinance, it’s approved,” he said. “A condition on a second reading [of a zoning ordinance] doesn’t make a lot of sense, and they’re difficult to enforce later on.”

VanLieshout said concerns expressed by the neighbors would be noted and could be brought before the plan commission to address in the development agreement.