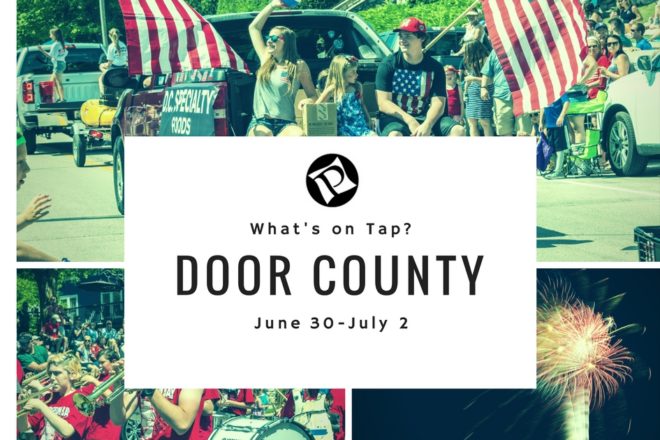 The Fourth is almost here. Every village has their own festivities planned. Everyone celebrates in their own way. The rest of the calendar is just as full as usual: live music, theater, and a birds of prey. Here are some suggestions to round out your weekend plans.

Hosted by Edgewood Gallery in Fish Creek, this free writing lab is on the practice of ekphrastics, or writing to the process of making art. Led by an accomplished writer, the 90-minute sessions will be a foray into an ancient endeavor. Starts at 10:30am.

In Sturgeon Bay? Come watch local blacksmiths employ historic techniques and peruse their wares. Begins at 11am at Heritage Village at Big Creek.

It’s opening weekend for this Tony award-winning drama put on by the crew at Third Avenue Playhouse in Sturgeon Bay. “Red” is a story about artistic vision and the vulnerability which surrounds the act of making one’s ambitions reality. Show begins at 7:30pm.

So many to choose from. You could get your fireworks on for four nights, if you’d want to. Catch both parades if you didn’t catch enough candy.

Ever want to learn how to start a fire using a bow drill? This week’s Survival Series brings Fire Science expert Ken Foszcz back to Newport State Park to lead the demonstration. Class begins at 1pm. Meet at the picnic shelter at Lot 3.

Couldn’t fit it in last weekend? No problem. Stop by for turkey legs fit for a king, jesters touting impressive performance skills, and peruse the shops until the Joust. The Faire opens at 10am and runs until 4pm.

The Open Door Sanctuary east of Carlsville has garnered a reputation for its flock of unreleasable birds of prey. At 1pm, take part in the Raptor Program to learn about and visit with these ambassadors of the natural world.