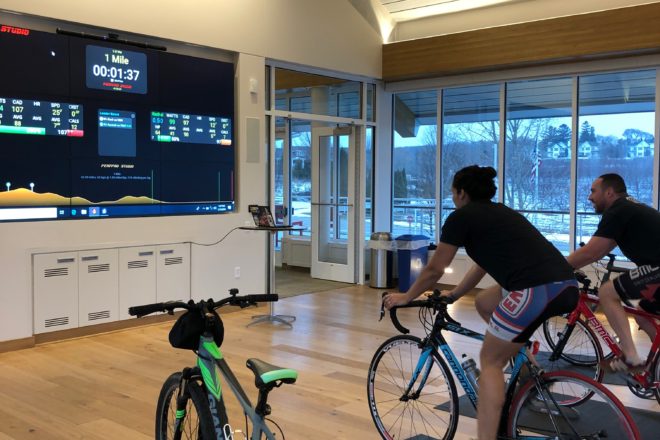 In the doldrums of winter – and with little snow for cross-country skiing, snowshoeing or fat biking – a new event has been established to keep bikers fit and competitive throughout the next few months. INDOOR ACTIVE will host an indoor cycling race series at the Kress Pavilion in Egg Harbor.

“We all love to be outside much of the time, but there are always those elements that make it hard to be outside,” said Rachel Stollenwerk, founder of INDOOR ACTIVE. “Having the opportunity in the winter that keeps us motivated and engaged in active, healthy lifestyles helps us get through long months.”

Although the series of four races employs some advanced technology – CycleOps M2 Smart Trainers with resistance synced to PerfPRO Studio course-route data – Stollenwerk encourages riders of all abilities to participate. All you need is a bike.

“It provides the competition of racing in a very open and encouraging environment whether you’re a beginner or advanced cyclist,” Stollenwerk said. “Riders will ride side by side so there is a race element.”

Although bikers of different abilities would quickly spread out on a road outside, this event sustains the spirit of competition cycling in a group setting throughout the race time.

Each rider will compete on his or her own bike, set up on a trainer and synced to the same 10K course. (A bike can be provided if you don’t have your own.) Because the course sometimes simulates an incline, resistance on the trainer will automatically increase as if riding outside.

The fastest male and female riders at each indoor race will earn awards. Those who participate in all four races will also be eligible to earn an award for the fastest overall time.

Stollenwerk, who owns Edge of Park Bike & Moped Rental and operates it during the summer, has met a cohort of cyclists who didn’t want to hang up their race wheels for six months each year.

“That led me to think about what I can do in the wintertime to generate a structure, a schedule, things to do to share with other people,” Stollenwerk said. “Bringing cycling inside and setting up trainers in my own shop and seeing the interest there was for people participating in a cycling class, I started thinking about how we engage people on a more competitive level and get people amped up for fun, active events.”

Four times a week, Stollenwerk hosts cycling workouts at Edge of Park in Fish Creek using the same setup. The consistent rider can watch his or her absolute power, speed and time improve by using true data, rather than an uncalibrated resistance lever found on the bikes at most spin classes.

The first race at the Kress Pavilion will be held Jan. 20, and registration will remain open until the start of the event. The other races will be held Feb. 24, March 17 and April 20, all featuring different courses. Registration is $20 for one race or $75 for the series. Register at indooractivesports.com/winter-race-series.