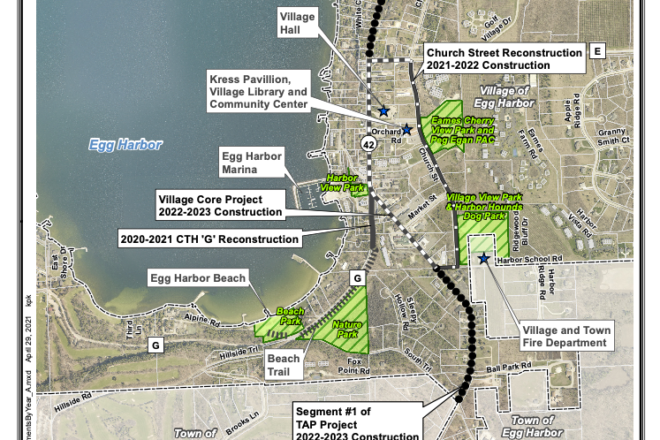 The Village of Egg Harbor approved $5.375 million in borrowing during its June 14 meeting to cover the cost of a host of road and streetscaping projects it is set to embark on in the coming years. The borrowing is primarily for Church Street reconstruction.

The Department of Transportation (DOT) is slated to repave the highway in 2023, and most of the improvements related to that project will be paid for with separate borrowing. The village is using the DOT project as an opportunity to complete a long list of other changes aimed at adding parking, pedestrian amenities and streetscape enhancements.

The village repays debt through the tax levy, with no special assessments levied against benefiting property owners.

Informational meetings to review plans and gather public input will be held Aug. 2, 6 pm; and Aug. 3, 9 am, at the Kress Pavilion. The meetings will also be recorded.

The Highway 42 plan has changed since it was unveiled in early 2020. When that plan was released, the village touted enhancements to pedestrian and bike infrastructure to encourage visitors to reduce driving. That included dedicated bike lanes through the village in both directions. The lanes have since been removed from the highway plan and relegated to Church Street to make way for more parking and turn lanes. They were replaced by “bike accommodations” along the highway, meaning that lanes will be wide enough for vehicles to pass cyclists without crossing the centerline.

The latest plan would increase the number of street parking spaces in the downtown core from 74 to 120 by eliminating most of the bump-outs that were installed as part of the village’s last major highway project, which was completed in 1989, when curb and gutter was installed. That, coupled with the urbanization of Church Street with 150 marked parking spaces, is meant to address the growing complaints about parking. The village received a $1 million Local Roads Improvement Program grant to help pay for that project.

The village has also changed the design of the center turn lanes. Earlier versions included a turn lane in both directions through stretching around the bend in Highway 42 between Greens N Grains and Shipwrecked. Now those turn lanes will be limited to northbound at County G and at Whitecliff Road, and southbound at the Main Street Shops.

A key component of the project is extending sidewalks on the north and south ends of the village. On the north end, the sidewalk would provide safe pedestrian access from County E to several lodging establishments, including Egg Harbor Lodge, Ashbrooke Hotel, Lull-Abi Inn and Bay Point Inn. On the south end, it would extend to several retail stores and complete the walking loop between South Trail Road, County G and Highway 42.

The village received a $1.38 million Transportation Alternatives Program grant from the state to offset the cost of those extensions.

Up in the Air

The village has yet to decide whether it wants to follow in the footsteps of Sister Bay and Ephraim by burying utilities through the downtown core, or install new, taller utility poles as Fish Creek and Baileys Harbor have done.

The village is weighing three options. If it sticks with wooden poles, they will need to be replaced with taller poles that will require guy wires. It could also follow the path of Fish Creek, which installed black fiberglass poles throughout downtown that don’t require guy wires. Or it could bury utilities. New village administrator Megan Sawyer said the village is awaiting the final cost estimates for each option, but a preliminary estimate to bury utilities from Harbor School Road to County E was close to $2.2 million, including the cost of easements and land acquisitions for utility boxes.

The village is also finalizing its streetscape plan. Although most of the bump-outs throughout the village will be removed, several will remain to slow traffic, protect pedestrian crossings and provide visual interest. The grass patches between the sidewalk and the highway would be replaced with decorative concrete, similar to that used in Sister Bay.

The plans released in 2020 showed the removal of many of the trees that serve to break up the downtown area’s asphalt and concrete landscape, though new trees would be planted. The village is still working with McMahon Engineers to determine which trees would need to be removed. Most of those in question were planted as part of the 1989 highway project.